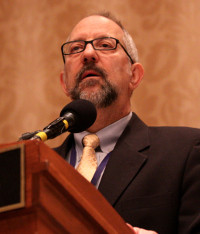 Joseph T. Salerno (born 1950) is an American Austrian School economist who is Professor of Economics, Chair of the economics graduate program in the Lubin School of Business at Pace University and Academic Vice President of the Ludwig von Mises Institute. He earned his B.A. at Boston College and his M.A. and Ph.D. at Rutgers University.

Economist Joe Salerno calls this one of Cantillon's "greatest achievements" ... Cantillon inspired a host of Austrians ...

To begin with, pervading the Essai is the modern subjectivist insight that, in the words of Professor Kirzner, "...consumer demand constitutes a vibrant, active market force, with a powerful positive impact on resource allocation, prices, and other phenomena." According to Cantillon, it is the ever-changing "Humors and Fancies of men" which ultimately determine market prices and productive incomes and through them the allocation of land and labor resources. (Salerno 1985)

In a lecture last year Prof. Joseph Salerno of Pace University pointed out that war is a device by which a ruling class not only expands its power and access to wealth, but also distracts the domestic population from the exploitation perpetrated by its government. The welfare-warfare state does not exist primarily to serve and protect "its" people. It does those things to some extent, of course, but only for the same reason the giant in "Jack and the Beanstalk" fed the goose that laid the golden eggs: to sustain the exploitation as long as possible.
Related Topics: The State, War

Biography of Carl Menger: The Founder of the Austrian School
Biographical and bibliographical essay, discussing his life and work and delving into various aspects of Austrian economic theory as presented by Menger

Despite the many illustrious forerunners in its six-hundred year prehistory, Carl Menger (1840-1921) was the true and sole founder of the Austrian school of economics proper. He merits this title if for no other reason than that he created the system of value and price theory that constitutes the core of Austrian economic theory. ... This then is Menger's greatest achievement and the essence of his 'revolution' in economics: the demonstration that prices are no more and no less than the objective manifestation of causal processes purposefully initiated and directed to satisfying human wants.
Related Topics: Economic Resources, Austrian Economics, Entrepreneurship, Carl Menger, Praxeology, Prices, Property
A Fairy Tale of the Austrian Movement, Mises Daily, 25 Sep 2007
Review of Brian Doherty's Radicals for Capitalism (2007), in particular of the section in chapter 7 where Peter Boettke discusses Austrian economics

The outstanding merit of Brian Doherty's book is that it contains a treasure trove of valuable information regarding the events, personalities, periodicals and organizations whose complex interplay influenced the intellectual and institutional development of the modern American libertarian movement ... That Doherty has been badly misled by his credulity and by his investigative and interpretive derelictions is substantiated in an oddly telling review of his book by Fink protégé Tyler Cowen ... It got things exactly right — when seasoned with a pinch of interpretive analysis.
Related Topics: Peter Boettke, Austrian Economics, George Mason University, Libertarianism, Ludwig von Mises, Murray Rothbard, Hans Sennholz
It Usually Ends With Murray Rothbard: My Long and Winding Road to Libertarianism and Austrian Economics, 23 Jun 2005
Lengthy autobiographical essay recounting Prof. Salerno's progression from conservatism to anarcho-capitalism, from classical to Austrian economics, and meeting and getting to know Murray Rothbard

I vividly recall the event that set me on a long and winding road to libertarianism and Austrian economics. I was twelve years old and my parents, who were both first generation Italian-Americans, were hosting some of my mother's relatives, including a distant male cousin who had traveled from Italy to visit relatives residing in Rhode Island and New Jersey. ... Thus when I disembarked from Don Lavoie's car in South Royalton, Vermont in June 1974 to attend the first Austrian economics conference to be convened in the United States, I, like Don and most of the other attendees, had arrived by way of Murray Rothbard.
Related Topics: Cold War, Austrian Economics, Barry Goldwater, Libertarianism, Murray Rothbard, Vietnam War
Money and Gold in the 1920s and 1930s: An Austrian View, The Freeman, Oct 1999
Criticizes Richard Timberlake's The Freeman articles on U.S. monetary policy during 1920-39, contrasting the British Banking School vs. Currency School definitions of inflation

In consecutive issues of The Freeman, Richard Timberlake has contributed an interesting trilogy of articles advancing a monetarist critique of the conduct of U.S. monetary policy during the 1920s and 1930s. In the first of these articles, Timberlake disputes the late Murray Rothbard's "Austrian" account ... Our conclusion, then, is that the Fed's monetary policy, except for very brief periods in 1929 and 1936–1937 ..., was consistently and unremittingly inflationist in the 1920s and 1930s. This inflationism was the cause of the Great Depression and one of the reasons why it was so protracted.
Related Topics: Banking, Federal Reserve System, Gold Standard, Inflation, Murray Rothbard, Richard Timberlake, Unemployment, United Kingdom
The Mystery of Banking, The Mystery of Banking, Jul 2008
Foreword to the 25th anniversary edition of Murray Rothbard's The Mystery of Banking (1983), republished in 2008 by the Mises Institute

Long out of print, The Mystery of Banking is perhaps the least appreciated work among Murray Rothbard's prodigious body of output. This is a shame because it is a model of how to apply sound economic theory, dispassionately and objectively, to the origins and development of real-world institutions and to assess their consequences ... With the US housing crisis metamorphosing into a full-blown financial crisis ... The time is finally ripe to publish this new edition of the book that asked the forbidden question about the Fed and fractional-reserve banking when it was first published 25 years ago.
Related Topics: Federal Reserve System, Money, Murray Rothbard

The Banks Are Broke, The Lew Rockwell Show, 22 Jul 2008
Lew asks Salerno why the entire banking industry is threatened if a big bank is allowed to go bankrupt
Related Topic: Banking

The introductory paragraph uses material from the Wikipedia article "Joseph Salerno" as of 28 Dec 2017, which is released under the Creative Commons Attribution-Share-Alike License 3.0.