Thomas Paine - Hero of the Day 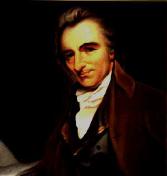 The following passages are from the first of the papers on The American Crisis that Thomas Paine penned early in the American Revolution. It is dated December 23, 1776.

These are the times that try men's souls. The summer soldier and the sunshine patriot will, in this crisis, shrink from the service of their country; but he that stands it now, deserves the love and thanks of man and woman. Tyranny, like hell, is not easily conquered; yet we have this consolation with us, that the harder the conflict, the more glorious the triumph. What we obtain too cheap, we esteem too lightly: it is dearness only that gives every thing its value. Heaven knows how to put a proper price upon its goods; and it would be strange indeed if so celestial an article as freedom should not be highly rated. Britain, with an army to enforce her tyranny, has declared that she has a right (not only to tax) but "to bind us in all cases whatsoever," and if being bound in that manner, is not slavery, then is there not such a thing as slavery upon earth. Even the expression is impious; for so unlimited a power can belong only to God.

Whether the independence of the continent was declared too soon, or delayed too long, I will not now enter into as an argument; my own simple opinion is, that had it been eight months earlier, it would have been much better. We did not make a proper use of last winter, neither could we, while we were in a dependent state. However, the fault, if it were one, was all our own; we have none to blame but ourselves ...

I shall conclude this paper with some miscellaneous remarks on the state of our affairs; and shall begin with asking the following question, Why is it that the enemy have left the New England provinces, and made these middle ones the seat of war? The answer is easy: New England is not infested with Tories, and we are. I have been tender in raising the cry against these men, and used numberless arguments to show them their danger, but it will not do to sacrifice a world either to their folly or their baseness. The period is now arrived, in which either they or we must change our sentiments, or one or both must fall. And what is a Tory? Good God! what is he? I should not be afraid to go with a hundred Whigs against a thousand Tories, were they to attempt to get into arms. Every Tory is a coward; for servile, slavish, self-interested fear is the foundation of Toryism; and a man under such influence, though he may be cruel, never can be brave.

But, before the line of irrecoverable separation be drawn between us, let us reason the matter together ...