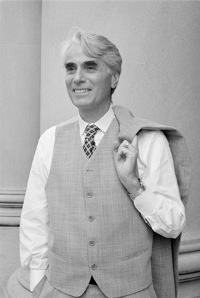 Robert Nozick (16 November 1938 – 23 January 2002) was an American philosopher. He held the Joseph Pellegrino University Professorship at Harvard University, and was president of the American Philosophical Association. He is best known for his books Philosophical Explanations (1981), which included his counterfactual theory of knowledge, and Anarchy, State, and Utopia (1974), a libertarian answer to John Rawls' A Theory of Justice (1971), in which Nozick also presented his own theory of utopia as one in which people can freely choose the rules of the society they enter into. His other work involved ethics, decision theory, philosophy of mind, metaphysics and epistemology. His final work before his death, Invariances (2001), introduced his theory of evolutionary cosmology, by which he argues invariances, and hence objectivity itself, emerged through a theory of evolutionary cosmology across possible worlds.

This article is derived from the English Wikipedia article "Robert Nozick" as of 4 Apr 2018, which is released under the Creative Commons Attribution-Share-Alike License 3.0.