James Otis - Hero of the Day 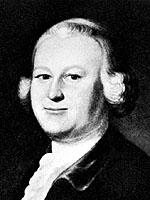 James Otis (1725-1783) was an early champion of the rights of the American colonials against the occupying force of Great Britain, some of whose activities resembled those of today's DEA or BATF or INS. Both his deeds and his argumentation helped lay the groundwork for the more spectacular Revolutionary events of the late 1760s and 1770s that we remember a little better.

"Writs of assistance" were general warrants that assisted the British in searching for smuggled goods anywhere and everywhere—no specific warrant necessary. (The colonials were nothing if not smugglers.) Otis was the Advocate-General in Massachusetts when the legality of the writs was challenged. Rather than perform the odious task of defending the writs he resigned his post, and took the opposite side on behalf of the Boston merchants. Following is an excerpt from his speech before the Superior Court of Massachusetts

May it please your Honors: I was desired by one of the court to look into the books, and consider the question now before them concerning Writs of Assistance. I have accordingly considered it, and now appear not only in obedience to your order, but likewise in behalf of the inhabitants of this town, who have presented another petition, and out of regard to the liberties of the subject. And I take this opportunity to declare that whether under a fee or not (for in such a cause as this I despise a fee) I will to my dying day oppose, with all the powers and faculties God has given me, all such instruments of slavery on the one hand and villainy on the other as this Writ of Assistance is.

It appears to me the worst instrument of arbitrary power, the most destructive of English liberty and the fundamental principles of law, that ever was found in an English law-book....

...I say I admit that special Writs of Assistance, to search special places, may be granted to certain persons on oath; but I deny that the writ now prayed for can be granted, for I beg leave to make some observations on the writ itself, before I proceed to other Acts of Parliament.

In the first place, the writ is universal, being directed "to all and singular justices, sheriffs, constables, and all other officers and subjects"; so that, in short, it is directed to every subject in the King's dominions. Every one with this writ may be a tyrant; if this commission be legal, a tyrant in a legal manner, also, may control, imprison, or murder any one within the realm. In the next place, it is perpetual; there is no return. A man is accountable to no person for his doings. Every man may reign secure in his petty tyranny, and spread terror and desolation around him, until the trump of the Archangel shall excite different emotions in his soul. In the third place, a person with this writ, in the daytime, may enter all houses, shops, etc., at will, and command all to assist him. Fourthly, by this writ not only deputies, etc., but even their menial servants, are allowed to lord it over us. What is this but to have the curse of Canaan with a witness on us: to be the servants of servants, the most despicable of God's creation?

Now, one of the most essential branches of English liberty is the freedom of one's house. A man's house is his castle; and whilst he is quiet, he is as well guarded as a prince in his castle. This writ, if it should be declared legal, would totally annihilate this privilege....