John Hancock - Hero of the Day 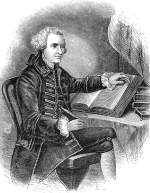 The following sketch of John Hancock is excerpted from the 1829 book Lives of the Signers to the Declaration of Independence by the Rev. Charles A. Goodrich.

A signature to the Declaration of Independence, without reference to general views, was, to each individual, a personal consideration of the most momentous import. It would be regarded in England as treason, and expose any man to the halter or the block. The only signature which exhibits indications of a trembling hand is that of Stephen Hopkins, who had been afflicted with the palsy. In this work of treason, John Hancock [1737-1793] led the way, as President of the Congress; and by the force with which he wrote, he seems to have determined that his name should never be erased.

This gentleman, who, from his conspicuous station in the Continental Congress of 1776, claims our first notice, was born in the town of Quincy, in the state of Massachusetts, in the year 1737. Both his father and grandfather were clergy-men, distinguished for great devotion to the duties of their profession, and for the happy influence which they exercised over those to whom they ministered. Of his father it is recorded, that he evinced no common devotion to learning, to which cause he rendered essential service, by the patronage that he gave to the literary institutions of his native state. Of so judicious a counsellor, young Hancock was deprived, while yet a child, but happily he was adopted by a paternal uncle, Thomas Hancock, the most opulent merchant in Boston, and the most enterprising in New-England. Mr. Thomas Hancock was a man of enlarged views; and was distinguished by his liberality to several institutions, especially to Harvard college, in which he founded a professorship, and in whose library his name is still conspicuous as a principal benefactor.

Under the patronage of the uncle, he received a liberal education in the above university, where he was graduated in 1754. During his collegiate course, though respectable as a scholar, he was in no wise distinguished, and at that time, gave little promise of the eminence to which he afterwards arrived. On leaving college, he was entered as a clerk in the counting house of his uncle, where he continued till 1760; at which time he visited England, both for the purposes of acquiring information, and of becoming personally acquainted with the distinguished correspondents of his patron. In 1764, he returned to America; shortly after which his uncle died, leaving to his nephew his extensive mercantile concerns, and his princely fortune, then the largest estate in the province. To a young man, only twenty-seven, this sudden possession of wealth was full of danger; and to not a few would have proved their ruin.

But Hancock became neither giddy, arrogant, nor profligate; and he continued his former course of regularity, industry, and moderation. Many depended upon him, as they had done upon his uncle, for employment. To these he was kind and liberal; while in his more extended and complicated commercial transactions, he maintained a high reputation for honour and integrity. The possession of wealth, added to the upright and honourable character which he sustained, naturally gave him influence in the community, and rendered him even popular. In 1766, he was placed by the suffrages of his fellow citizens in the legislature of Massachusetts, and this event seems to have given a direction to his future career1.

He thus became associated with such individuals as Otis, Cushing, and Samuel Adams, men of great political distinction, acute discrimination, and patriotic feeling. In such an atmosphere, the genius of Hancock brightened rapidly, and he soon became conspicuous among his distinguished colleagues. It has, indeed, been asserted, that in force of genius, he was inferior to many of his contemporaries; but honourable testimony was given, both to the purity of his principles, and the excellence of his abilities, by his frequent nomination to committees, whose deliberations deeply involved the welfare of the community.