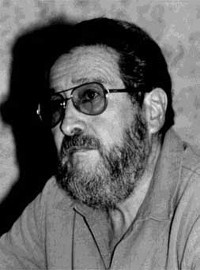 Karl Hess (born (Carl Hess III; 25 May 1923 – 22 April 1994) was an American speechwriter and author. He was also a political philosopher, editor, welder, motorcycle racer, tax resister, atheist and libertarian activist. His career included stints on the Republican right and the New Left before embracing free-market anarchism. Later in life, he summed up his role in the economy by remarking "I am by occupation a free marketer (crafts and ideas, woodworking, welding, and writing)."

This article is derived from the English Wikipedia article "Karl Hess" as of 20 Jun 2018, which is released under the Creative Commons Attribution-Share-Alike License 3.0.