Benjamin Franklin - Hero of the Day 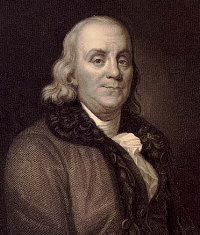 The following passage, in which we learn of Ben Franklin's youthful delight in contentious discourse, is adapted from The Autobiography of Benjamin Franklin (1818, 1868).

There was another bookish lad in the town, John Collins by name, with whom I was intimately acquainted. We sometimes disputed, and very fond we were of argument, and very desirous of confuting one another, which disputatious turn, by the way, is apt to become a very bad habit.... I had caught it by reading my father's books of dispute about religion. Persons of good sense, I have since observed, seldom fall into it, except lawyers, university men, and men of all sorts that have been bred at Edinborough.

A question was once, somehow or other, started between Collins and me, of the propriety of educating the female sex in learning, and their abilities for study. He was of opinion that it was improper, and that they were naturally unequal to it. I took the contrary side, perhaps a little for dispute's sake. He was naturally more eloquent, had a ready plenty of words; and sometimes, as I thought, bore me down more by his fluency than by the strength of his reasons.

As we parted without settling the point, and were not to see one another again for some time, I sat down to put my arguments in writing, which I copied fair and sent to him. He answered, and I replied. Three or four letters of a side had passed, when my father happened to find my papers and read them. Without entering into the discussion, he took occasion to talk to me about the manner of my writing; observed that, though I had the advantage of my antagonist in correct spelling and pointing (which I ow'd to the printing-house), I fell far short in elegance of expression, in method and in perspicuity, of which he convinced me by several instances. I saw the justice of his remark, and thence grew more attentive to the manner in writing, and determined to endeavor at improvement.

When about 16 years of age [I read] Locke On Human Understanding, and the Art of Thinking, by Messrs. du Port Royal. While I was intent on improving my language, I met with an English grammar (I think it was Greenwood's), at the end of which there were two little sketches of the arts of rhetoric and logic, the latter finishing with a specimen of a dispute in the Socratic method; and soon after I procur'd Xenophon's Memorable Things of Socrates, wherein there are many instances of the same method. I was charm'd with it, adopted it, dropt my abrupt contradiction and positive argumentation, and put on the humble inquirer and doubter.

And being then, from reading Shaftesbury and Collins, become a real doubter in many points of our religious doctrine, I found this method safest for myself and very embarrassing to those against whom I used it; therefore I took a delight in it, practis'd it continually, and grew very artful and expert in drawing people, even of superior knowledge, into concessions, the consequences of which they did not foresee, entangling them in difficulties out of which they could not extricate themselves, and so obtaining victories that neither myself nor my cause always deserved.

I continu'd this method some few years, but gradually left it, retaining only the habit of expressing myself in terms of modest diffidence; never using, when I advanced any thing that may possibly be disputed, the words certainly, undoubtedly, or any others that give the air of positiveness to an opinion; but rather say, I conceive or apprehend a thing to be so and so; it appears to me, or I should think it so or so, for such and such reasons; or I imagine it to be so; or it is so, if I am not mistaken.

This habit, I believe, has been of great advantage to me when I have had occasion to inculcate my opinions, and persuade men into measures that I have been from time to time engag'd in promoting; and, as the chief ends of conversation are to inform or to be informed, to please or to persuade, I wish well-meaning, sensible men would not lessen their power of doing good by a positive, assuming manner, that seldom fails to disgust, tends to create opposition, and to defeat every one of those purposes for which speech was given to us, to wit, giving or receiving information or pleasure.

In TDO's concluding installment from The Autobiography of Benjamin Franklin (1818, 1868), old Ben tells us how he "conceiv'd the bold and arduous project of arriving at moral perfection."

I wish'd to live without committing any fault at any time; I would conquer all that either natural inclination, custom, or company might lead me into. As I knew, or thought I knew, what was right and wrong, I did not see why I might not always do the one and avoid the other. But I soon found I had undertaken a task of more difficulty than I had imagined.

I concluded, at length, that the mere speculative conviction that it was our interest to be completely virtuous, was not sufficient to prevent our slipping; and that the contrary habits must be broken, and good ones acquired and established, before we can have any dependence on a steady, uniform rectitude of conduct. For this purpose I therefore contrived the following method.

In the various enumerations of the moral virtues I had met with in my reading, I found the catalogue more or less numerous, as different writers included more or fewer ideas under the same name. Temperance, for example, was by some confined to eating and drinking, while by others it was extended to mean the moderating every other pleasure, appetite, inclination, or passion, bodily or mental, even to our avarice and ambition. I propos'd to myself, for the sake of clearness, to use rather more names, with fewer ideas annex'd to each, than a few names with more ideas; and I included under thirteen names of virtues all that at that time occurr'd to me as necessary or desirable, and annexed to each a short precept, which fully express'd the extent I gave to its meaning.

These names of virtues, with their precepts, were:

I made a little book, in which I allotted a page for each of the virtues. I rul'd each page with red ink, so as to have seven columns, one for each day of the week, marking each column with a letter for the day. I determined to give a week's strict attention to each of the virtues successively.

I enter'd upon the execution of this plan for self-examination, and continu'd it with occasional intermissions for some time. I was surpris'd to find myself so much fuller of faults than I had imagined; but I had the satisfaction of seeing them diminish.