David Kelley - Hero of the Day 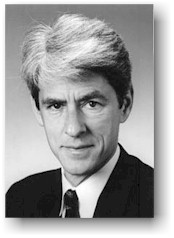 The publication of such comprehensive, lucid, and path-breaking works as The Evidence of the Senses, The Art of Reasoning, and A Life of One's Own—not to mention a spate of talks, essays, and other short works—would be more than enough nonpareil achievement for any one mere mortal's career.

But qua philosopher and intellectual activist David Kelley is not just a hero. He's a superhero.

In 1990, dismayed by the exploding excesses of the "official," dogmatic approach to the Objectivist philosophy originated by Ayn Rand, Kelley went off on his own to form the Institute for Objectivist Studies.

He possessed only one item of capital when he started out: his rolodex. The membership rolls have grown every year, and the Promethean staff now includes such luminaries as Robert James Bidinotto, Roger Donway, Russell La Valle, William Thomas, Patrick Stephens, Jamie Dorrian, Kristen Carlson, Laura Lucey, Stephen Hicks, and Thomas Stone.

After a decade of benevolent development, application, and explication of the Objectivist philosophy, the Institute has expanded its mission as The Objectivist Center. The mission of the Center is to advance Objectivist ideas and ideals in our culture and society, and to create an open community of people who share those ideals. TOC crusades for rational individualism, and aims to be a home for rational individualists. A new outreach arm of the Center is currently in development: the Atlas Society.

The Center offers a wide range of educational and social programs for scholars, the general public, and the growing Objectivist community. These programs include research, training, public advocacy, courses, conferences, publications, and social events.

From the beginning, a guiding principle of the outfit has been to encourage an open and tolerant atmosphere for the discussion of ideas (in sharp contrast to the dogmatic approach of the Ayn Rand Institute approach, which likes to commit the self-righteous seppuku of excommunicating independent thinkers at the drop of a hat).

"Almost everyone agrees that today's culture is in a crisis," says Kelley. "Morally corrupt leaders, nihilistic movies and music, a bankrupt educational system, random acts of horrific violence—these symptoms are all around us. Millions sense that the source of this cultural chaos lies in a poverty of values: in moral rootlessness, in a lack of philosophical moorings."

"I believe that Objectivism offers the moral and philosophical solution. The Objectivist Center is leading the way. We are laying the intellectual groundwork for cultural regeneration; finding the principled solutions to the practical problems of modern living; fostering a benevolent community rooted in respect for individual human life and liberty."