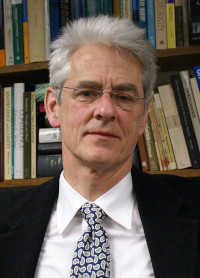 David Kelley (born 23 June 1949) is an American philosopher. He is an Objectivist, though his position that Objectivism can be revised and influenced by other schools of thought has prompted disagreements with other Objectivists. Kelley is also an author of several books on philosophy and the founder of The Atlas Society, an institution he established in 1990 after permanently dissociating with Leonard Peikoff and the Ayn Rand Institute.

Kelley, the founder and executive director of the Objectivist Center (formerly the Institute for Objectivist Studies), is an insightful author on important philosophical issues relating to individualism and liberty. He has written more than 70 articles in the Wall Street Journal, Barron's, Harper's, Reason, The Freeman, Cato Journal, The Navigator, Harvard Business Review, and other publications. His books include The Evidence of the Senses (1988), The Art of Reasoning (1994), A Life of One's Own: Individual Rights and the Welfare State (1998), and The Contested Legacy of Ayn Rand (2000).

1974 Garvey Fellow, by Independent Institute
Topic: "The Moral Imperative of the American Private Enterprise System of Risks and Rewards"

David Kelley - Hero of the Day, The Daily Objectivist, 2000

In 1990, dismayed by the exploding excesses of the 'official,' dogmatic approach to the Objectivist philosophy originated by Ayn Rand, Kelley went off on his own to form the Institute for Objectivist Studies. ... 'Almost everyone agrees that today's culture is in a crisis,' says Kelley. 'Morally corrupt leaders, nihilistic movies and music, a bankrupt educational system, random acts of horrific violence—these symptoms are all around us. Millions sense that the source of this cultural chaos lies in a poverty of values: in moral rootlessness, in a lack of philosophical moorings.'
Interview with John Hospers, by John Hospers, Karen Minto, Full Context, Jun 1998
Topics discussed include: intellectual influences, respected philosophers, determinism, David Kelley, Ayn Rand, philosophy and Objectivism in universities, the Sense of Life documentary and Atlas Shrugged

Q: How well did David Kelley defend direct realism in The Evidence of the Senses?
Hospers: I confess that I've never read it all the way through. Some years ago I was much more involved with problems of perception than I am now; his book came too late on the scene for me. But he writes with admirable clarity and doesn't confuse one sub-problem with another, as so many writers do. ... But you can’t say that something has a property A and also doesn’t have it ... However, it may be that David doesn't want to deny any of this. I'm afraid I'd have to go and spend some time with the book again.
Related Topics: David Hume, South Korea, Philosophy, Ayn Rand
Interview with Nathaniel Branden, by Nathaniel Branden, Karen Reedstrom, Full Context, Sep 1996
In two parts; topics range from David Kelley, objectivisim, Ayn Rand, his memoir Judgment Day, Barbara Branden, Leonard Peikoff, homosexuality, self-esteem and more

[Kelley] admires Ayn Rand, he has embraced her philosophy, but he has retained his ability to think and make independent judgments. His Institute for Objectivist Studies, while resting on Objectivist fundamentals, offers space for debate, further exploration. He does not regard Objectivism as a closed and finished system. He is willing to see where the gaps are, where more work needs to be done. Above all, what I admire him for is that he has created an environment in which people can have honest disagreements while treating one another civilly, without the need to make anyone a villain.
Related Topics: Barbara Branden, Children, Ethics, Life, Romantic Love, Objectivism, Personal Responsibility, Psychology, Ayn Rand, Chris Matthew Sciabarra, Self-Esteem, Sexual Pleasure

Epistemology and Politics: Ayn Rand's Cultural Commentary, Navigator, Dec 2004
Discusses the continued currency of Rand's 1960-1970s writings, citing as examples "Faith and Force: The Destroyers of the Modern World", "Racism", "The Age of Envy" and "The Anti-Industrial Revolution"

Ayn Rand is best known for her novels, which cont-inue to sell hundreds of thousands of copies each year, and for her philosophical essays on ethics, political philosophy, aesthetics, and epistemology. But she was also an astute observer of politics and culture ... [S]he would have seen the common essence of secular communism and Islamic fundamentalism ... In short, Rand's analysis of ideas at work in the world is as timely and illuminating as when she wrote. It ought to be required reading for everyone engaged in the post-9/11 war on terror.
Related Topics: Achievement, Capitalism, Conservatism, Epistemology, Political philosophy, Ayn Rand, Socialism
Tax Cuts Are Unfair? It Just Ain't So!, The Freeman, Jul 1999
Discusses Republican proposals for a 10% cut in income-tax rates, countering arguments made by opponents

Federal tax revenues last year were nearly 22 percent of GDP—the highest level in American history. With federal coffers swollen, the government is enjoying a surplus that, until recently, no one would have expected. It is obviously time for a tax cut to return some of this largess to its rightful owners, the taxpayers. ... Are the 'winners' in economic growth morally obliged to pay compensation to the 'losers'? It just ain't so. There are no real losers—and that's because the 'winners' have already spread the prodigious benefits of their productive ability to everyone with whom they trade.
Related Topics: Entrepreneurship, Ayn Rand, Taxation

Interview with David Kelley, by David Kelley, Raymie Stata, Full Context, Jun 1993
Topics discussed include: the Institute for Objectivist Studies, ties between IOS and classical liberal institutions, the Objectivism movement, the split with the Ayn Rand Institute, the marketplace of ideas, open questions in philosophy, and psychology

Q: Of all the things that have been done at the Institute in the last three years, to which would you point to with the most pride?
Kelley: In terms of programs, I would say our Summer Seminar in philosophy. It has been offered all three years we've been in existence. It's a week long seminar. ...
Q: How does psychology fit into that picture? ...
Kelley: Well it's absolutely true that psychological evidence is relevant to ethics. The structure of the Objectivist ethics is life as the standard of value, and then the law of causality. ... I think there's definitely a large need to integrate the valid psychological evidence ...
Related Topics: Achievement, Epistemology, Ethics, Life, Objectivism, Psychology, Ayn Rand, Julian Simon

What is, in your opinion, the major dividing line between the 'official' Objectivists and those followers of Rand that take to including libertarians, for instance, as part of the movement?
I think David Kelley hit it on the head years ago: it is that the orthodoxy sees the philosophy as closed, while the neo- or revisionist- followers believe that Objectivism is an open system, one that is based on a core set of essential principles, but that will and must advance in its applications and implications, as each successive generation engages it.
Related Topics: Dialectics, Objectivism, Ayn Rand, Murray N. Rothbard, Russia

The introductory paragraph uses material from the Wikipedia article "David Kelley" as of 20 Dec 2011, which is released under the Creative Commons Attribution-Share-Alike License 3.0.