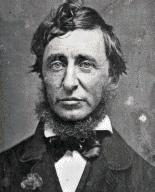 The following is excerpted from the famous essay by Thoreau (1817-1862) on "Civil Disobedience."

I have paid no poll tax for six years. I was put into a jail once on this account, for one night; and, as I stood considering the walls of solid stone, two or three feet thick, the door of wood and iron, a foot thick, and the iron grating which strained the light, I could not help being struck with the foolishness of that institution which treated my as if I were mere flesh and blood and bones, to be locked up. I wondered that it should have concluded at length that this was the best use it could put me to, and had never thought to avail itself of my services in some way. I saw that, if there was a wall of stone between me and my townsmen, there was a still more difficult one to climb or break through before they could get to be as free as I was. I did nor for a moment feel confined, and the walls seemed a great waste of stone and mortar. I felt as if I alone of all my townsmen had paid my tax. They plainly did not know how to treat me, but behaved like persons who are underbred. In every threat and in every compliment there was a blunder; for they thought that my chief desire was to stand the other side of that stone wall. I could not but smile to see how industriously they locked the door on my meditations, which followed them out again without let or hindrance, and they were really all that was dangerous. As they could not reach me, they had resolved to punish my body; just as boys, if they cannot come at some person against whom they have a spite, will abuse his dog. I saw that the State was half-witted, that it was timid as a lone woman with her silver spoons, and that it did not know its friends from its foes, and I lost all my remaining respect for it, and pitied it.

Thus the state never intentionally confronts a man's sense, intellectual or moral, but only his body, his senses. It is not armed with superior wit or honesty, but with superior physical strength. I was not born to be forced. I will breathe after my own fashion. Let us see who is the strongest. What force has a multitude? They only can force me who obey a higher law than I. They force me to become like themselves. I do not hear of men being forced to live this way or that by masses of men. What sort of life were that to live? When I meet a government which says to me, "Your money or your life," why should I be in haste to give it my money? It may be in a great strait, and not know what to do: I cannot help that. It must help itself; do as I do. It is not worth the while to snivel about it. I am not responsible for the successful working of the machinery of society. I am not the son of the engineer. I perceive that, when an acorn and a chestnut fall side by side, the one does not remain inert to make way for the other, but both obey their own laws, and spring and grow and flourish as best they can, till one, perchance, overshadows and destroys the other. If a plant cannot live according to nature, it dies; and so a man.