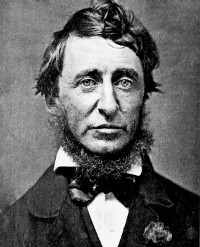 Henry David Thoreau (12 July 1817 – 6 May 1862) was an American essayist, poet, philosopher, abolitionist, naturalist, tax resister, development critic, surveyor and historian. A leading transcendentalist, Thoreau is best known for his book Walden, a reflection upon simple living in natural surroundings, and his essay "Civil Disobedience" (originally published as "Resistance to Civil Government"), an argument for disobedience to an unjust state.

Henry David Thoreau (1817–1862) was an American philosopher, poet, and environmental scientist whose major work, Walden, draws upon each of these identities in meditating on the concrete problems of living in the world as a human being. He sought to revive a conception of philosophy as a way of life, not only a mode of reflective thought and discourse. Thoreau's work was informed by an eclectic variety of sources.
Henry David Thoreau (1817-1862), by Robert Michael Ruehl, Internet Encyclopedia of Philosophy
Major sections: Biographical Information - Subjectivity, Philosophy, and Writing - Education and Uncommon Sense - Nature and Ontology - Religion and the Wild - An Ethic of Preservative Care - Disobedient Politics - Conclusion

The American author Henry David Thoreau is best known for his magnum opus Walden, or Life in the Woods (1854); second to this in popularity is his essay, 'Resistance to Civil Government' (1849), which was later republished posthumously as 'Civil Disobedience' (1866). ... Thoreau gravitated toward Stoic philosophy, Hindu and Buddhist insights, and European idealism and romanticism; he was an eclectic thinker weaving together various philosophies to formulate his own unique strain of American thought.
Thoreau, Henry David (1817-1862), by Jeff Riggenbach, The Encyclopedia of Libertarianism, 15 Aug 2008
Biographical essay

Henry David Thoreau was an American naturalist, a lecturer, and an abolitionist. Thoreau was the author of perhaps the most radical and influential essay in the history of American political philosophy, "Civil Disobedience." ... Thoreau's tax resistance, which led to his being jailed in Concord in 1846, was occasioned by his opposition to slavery. Thoreau was an abolitionist, as was his father, and there is some evidence that both the Thoreau family home in Concord and Henry's famous cottage on Walden Pond, a short distance outside the village, were stops on the Underground Railroad that carried escaped slaves to freedom.
Related Topics: Government, Resistance to Civil Government

Henry David Thoreau | Libertarianism.org
Links to essays, columns and other resources about Thoreau, and to some of his writings

Henry David Thoreau was born David Henry Thoreau on July 12, 1817, in Concord, Massachusetts, a small country town about 20 miles northwest of Boston ... Nathaniel Hawthorne, who met him in 1842 at Emerson's house, wrote that though Thoreau seemed highly intelligent and had a Harvard education in an era when few men had any more schooling than the local grammar school could provide them ... What Thoreau really wanted to do was walk around the countryside, observing nature and making entries in his notebooks, which he would later write up in more finished form in his journal.
Related Topics: Anarchism, Ralph Waldo Emerson, Government, Massachusetts, United States
Henry David Thoreau and "Civil Disobedience," Part 1, by Wendy McElroy, Freedom Daily, Mar 2005
After some background and biographical material, describes the event (Thoreau's imprisonment) that led to writing "Civil Disobedience" and Thoreau's reaction to those who paid the tax on his behalf, his jailers, his neighbors and Ralph Waldo Emerson

Henry David Thoreau (1817–1862) was an introspective man who wandered the woods surrounding the small village of Concord, Massachusetts ... How, then, did he profoundly influence such political giants as Mohandas Gandhi, Leo Tolstoy, and Martin Luther King Jr.? The answer lies in a brief essay that has been variously titled but which is often referred to simply as "Civil Disobedience" (1849). Americans know Thoreau primarily as the author of the book Walden, or Life in the Woods (1854) but it is "Civil Disobedience" that established his reputation in the wider political world.
Related Topics: Children, Ralph Waldo Emerson, Ethics, Law, Life, Resistance to Civil Government, The State, Taxation
Henry David Thoreau and "Civil Disobedience," Part 2, by Wendy McElroy, Freedom Daily, Apr 2005
Examines several of the initial themes in "Civil Disobedience", including government injustice, the individual as the source of power and authority, war and the military and the reasons why people obey the state

Whatever his position on government, one point is clear: Thoreau denies the right of any government to automatic and unthinking obedience ... This is the key to Thoreau's political philosophy. The individual is the final judge of right and wrong. More than this, since only individuals act, only individuals can act unjustly ... Before Thoreau's imprisonment, when a confused taxman had wondered aloud about how to handle his refusal to pay, Thoreau had advised, "Resign." If a man chose to be an agent of injustice, then Thoreau insisted on confronting him with the fact that he was making a choice.
Related Topics: Standing Army, Democracy, Government, Resistance to Civil Government, War
Henry David Thoreau and "Civil Disobedience," Part 3, by Wendy McElroy, Freedom Daily, May 2005
Further examination of themes in "Civil Disobedience", including unjust laws, politicians and reformers, voting, when to resist the state and the influence on Gandhi

Thoreau dissects the notion that "the law is the law and should be respected." For one thing, not all laws are equal. Some laws exist for no other reason than to protect the government ... Lawyers and the courts are part of the state's defensive machinery ... Such courts offer no protection to Thoreau, who refuses to respect their authority. But he takes his refusal one step further. He not only rejects unjust laws but also the men who enact them. He withdraws his support from politicians who "rarely make any moral distinctions [and] are as likely to serve the Devil, without intending it, as God."
Related Topics: Law, Nonviolent resistance, Personal Responsibility, Resistance to Civil Government, The State, Voting
Henry David Thoreau - Hero of the Day, The Daily Objectivist, 2000
Excerpted from "Civil Disobedience"

I heartily accept the motto, 'That government is best which governs least'; and I should like to see it acted up to more rapidly and systematically. Carried out, it finally amounts to this, which also I believe--'That government is best which governs not at all'; and when men are prepared for it, that will be the kind of government which they will have.
"If 1,000 Men Were Not to Pay Their Tax Bills This Year…", by Carl Watner, Reason, Sep 1983
Discusses the 1846 incident that led Thoreau to spend a night in jail for refusing to pay a poll tax and the influence of his friends Bronson Alcott and Charles Lane as well as those Thoreau influenced later

One evening in late July 1846, Henry David Thoreau walked into the village of Concord from Walden Pond to pick up a shoe he had left at the cobbler's. He was stopped on the street by the local constable, Sam Staples, and asked to pay his poll tax, which he had not paid for three or four years ... Thoreau responded that he had not paid his tax as a matter of principle and didn't intend to pay it ... That didn't go over too well, and since Thoreau did not promptly pay up, Staples hauled him off to jail ... Based on his experience ... Thoreau presented a lecture ... titled 'The Relation of the Individual to the State.'
Related Topics: Nonviolent resistance, Resistance to Civil Government, Taxation
Module 9: Henry David Thoreau's Civil Disobedience and William Lloyd Garrison's The Liberator
Ninth module of the Cato Home Study Course, includes link to listen or download audio program (two parts, 1:015:32 and 1:07:13), questions and suggested readings

Henry David Thoreau (1817-1862) ... was a deep believer in the demands of conscience over the demands of the state. His refusal in July 1846 to pay a tax led him to write the essay Civil Disobedience, which was to exercise a great influence on subsequent generations of thinkers. ... Obligations to pay taxes to the state or to submit to its authority normally fall into the second category of particular obligations. Thoreau insists that he did not consent to them, and that he therefore is not bound by them and instead follows the demands of his own conscience (notably his opposition to the enforcement of slavery and to the war with Mexico).
Related Topic: William Lloyd Garrison
Protesting the Tax Protesters, by James Ostrowski, 1 Jan 2007
Presents several arguments against tax protesting, concluding with a suggested approach to fighting against confiscatory taxation

Tax protesters are not exercising civil disobedience as Henry David Thoreau did. That would be an entirely different strategy. Civil disobedience involves deliberately violating an unjust law so as to arouse public sentiment against it. That is not what tax protesters are doing.
Related Topics: United States Constitution, Taxation
Thoreau and "Resistance to Civil Government", by Gary M. Galles, Mises Daily, 19 Sep 2002
Presents several excerpts from "Resistance to Civil Government" together with a short introduction and concluding reflexion

Henry David Thoreau is best known for Walden, which chronicles his experiment in simple, self-sufficient living. Less remembered, however, is that while living at Walden Pond, he was imprisoned for refusing to pay his poll tax as a statement of protest against slavery and what he saw as an unjust war with Mexico. After someone else paid his tax, he was released, but he gave an 1848 lecture on 'Resistance to Civil Government'--since published as 'Civil Disobedience'--to explain his action.
Related Topic: Nonviolent resistance
Thoreau And The Modern American Housewife, by Frances Brown, Reason, Aug 1962
A 1960's housewife tells of her "friendship" with Thoreau, from having to read Walden in college, through jobs, marriage, wanting a new house, children growing up and how Henry's advice coloured her decisions

Today I went to town and bought two copies of Walden, and I mailed one to each of the boys, enclosing this note:

I would like for you to become better acquainted with my dear friend, Henry David Thoreau. The reading of this book started a new era in my life; it helped me to con­sider my values before I acted. I hope it can bring to you some of the hap­piness it has brought to me.

An Interview With David Theroux, by David J. Theroux, Strike The Root, 2 Sep 2003
Topics discussed include: the Independent Institute, Theroux's life before founding it, possible connection to Thoreau, the Vietnam War, his heroes and influencers, activism, September 11 and book recommendations

How did you get a cool name like David Theroux? Do people often ask you if it has anything to do with Henry David Thoreau?
Although Thoreau has long been an inspiration for me, my full name is actually David Jon Theroux ... After my birth and during my first year ... my parents moved and we lived in Needham, Mass., a short distance from Walden Pond, where Henry David Thoreau retreated to write his famous book, Walden. It is unclear whether there is a family tie to Thoreau (who had no direct descendants), but French names were often misspelled or re-spelled in order to be more functional in the English-speaking American republic.
Related Topics: Attacks of 11 September 2001, F. A. Harper, F. A. Hayek, Robert Higgs, Independent Institute, Libertarianism, Threats To Liberty, Vietnam War

The introductory paragraph uses material from the Wikipedia article "Henry David Thoreau" as of 14 Jul 2018, which is released under the Creative Commons Attribution-Share-Alike License 3.0.