John Milton - Hero of the Day 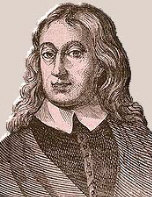 "[If you] wish to remain free, either instantly be wise, or, as soon as possible, cease to be fools; if you think slavery an intolerable evil, learn obedience to reason and the government of yourselves; and finally bid adieu to your dissensions, your jealousies, your superstitions, your outrages, your rapine, and your lusts. Unless you [do], you must be judged unfit, both by God and mankind, to be entrusted with the possession of liberty."

John Milton (1608-1674) is well known as the greatest Christian poet, author of Paradise Lost. Less well known is his lifelong dedication to liberty.

Married at 33 to a 16-year-old girl, he was soon disappointed. Milton was fluent in Latin, Hebrew, Greek; he read every night until midnight by candle, weakening his eyes until he went blind. His wife preferred parties to books, and left him.

Characteristically, Milton responded by writing a book: Doctrine and Discipline of Divorce, in which he argued that marriage was not merely for reproduction, but was a spiritual union between two souls.

The book was controversial, and as it was published without government permission, Parliament considered banning it. This infuriated Milton, spurring him to pen the Areopagitica, the most beautiful defense of free press in the English language. "[A]s good almost kill a man as kill a good book; who kills a man kills a reasonable creature, God's image; but he who destroys a good Book, kills reason itself."

He argued that free discussion abets the cause of truth.

"[T]here must be many schisms and many dissections made in the quarry and in the timber, ere the house of God can be built. And when every stone is laid artfully together, it cannot be united into a continuity, it can but be contiguous in this world; neither can every piece of the building be of one form; nay rather the perfection consists in this, that out of many moderate varieties and brotherly dissimilitudes that are not vastly disproportional arises the goodly and the graceful symmetry that commends the whole pile and structure."

A despiser of royalty, Milton supported Cromwell in the English Civil War. He was a Puritan, but not a strictly kosher Puritan. In his Second Defence he urged Parliament to "not prohibit the innocent freedoms of the good ... punish crimes, without interdicting those things which are lawful only on account of the abuses to which they may occasionally be exposed."

But the Commonwealth collapsed and Charles II returned to the throne. Milton became a wanted man. Though elderly and blind, he was imprisoned, until his fellow poet and MP Andrew Marvell convinced Charles to let Milton return home to dictate Paradise Lost. Milton's despair over the collapse of his dream for an English republic is sprinkled through the work. Say's Milton's Adam:

[God] gave us only over beast, fish, fowl
Dominion absolute; that right we hold
By his donation; but man over men
He made not lord; such title to himself
Reserving, human left from human free

But the archangel Michael replies:

Since [man] permits
Within himself unworthy powers to reign
Over free Reason, God in judgment just
Subjects him from without to violent lords;
Who oft as undeservedly enthrall
His outward freedom: Tyranny must be ...

Milton's dream of freedom seemed lost when he died in 1674. But within a century it would be regained, across the ocean.