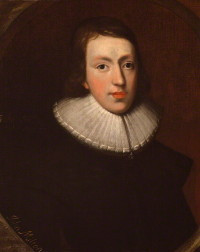 John Milton (9 December 1608 – 8 November 1674) was an English poet, polemicist, man of letters and civil servant for the Commonwealth of England under Oliver Cromwell. He wrote at a time of religious flux and political upheaval, and is best known for his epic poem Paradise Lost (1667), written in blank verse.

John Milton was one of the iconic figures of English literature. He is most familiar for his epic poem Paradise Lost and, in particular, his depiction of Satan. However, his legacy extends far beyond that one monumental work and indeed beyond poetry: He was a forceful and courageous writer on matters political and theological. In the turmoil preceding the English Civil War, he lent intellectual support to the republican cause and, upon the establishment of the Commonwealth, was employed to write tracts defending Oliver Cromwell's actions, in particular his execution of the king.
Related Topics: Freedom of the Press, Freedom of Religion

The site now contains all of Milton's poetry in English, Italian, Latin, and Greek, and selections of his prose. Almost all of the works ... have been fully annotated; most have solid introductions as well.

John Milton (1608-1674) ranks among the greatest poets of the English language. He is best known for the epic poem Paradise Lost (1667), but he also wrote prose works on history, religion, and contemporary politics. Although his academic talents marked him for a career in the Anglican church, Milton turned away from the Church of England at an early age and was a consistent supporter of the Puritan cause. He spent most of his life in academia or as a civil servant working for the Puritan Commonwealth.

Lilburne was influenced by scholarly John Milton who had been charged with violating Parliament's June 1643 law requiring that prior to publication written work must be licensed by a government censor and registered with the Stationers Company. Ordered to defend himself before Parliament, Milton gave a speech which became the famous pamphlet Areopagitica (1644). He maintained that truth tends to prevail when markets are open and the press is free. ... By contrast, John Milton favored hanging the king, which took place on January 30, 1649, and Milton rushed into print with a pamphlet defending the deed.
Related Topics: Edward Coke, Republic of Ireland, Thomas Jefferson, Rule of Law, John Lilburne, Freedom of the Press, Right Against Self-Incrimination
Areopagitica: Milton's Influence on Classical and Modern Political and Economic Thought, by Isaac M. Morehouse, 15 Dec 2009
Discusses the four sections of Milton's 1644 pamphlet, the reasons for which and the environment in which it was published, and various lessons or parallels that can be made from an economic and political philosophy perspective

It was during this time [after the abolishment of the Court of Star Chamber] that Milton, who had been educated for the ministry but had since devoted himself to poetry, put down the poet's pen and began pamphleteering. He wrote several works against episcopacy, on church-state relationships, and on Reformation. Milton was seen as a radical, and was definitely not within the mainstream of his contemporaries in theology or politics ... Milton further cemented his reputation as an extremist with the publication of a pamphlet on divorce in 1643. He had it printed illegally, without the required approval of the licensers.
Related Topics: Economics, F. A. Hayek, Moral Liberty, Adam Smith, Freedom of Speech
Is Free Speech in the US Doomed?, by Lindsay Marchello, 9 Nov 2017
Discusses events at various universities where protesters, equating mere speech with (physical) violence, responded violently to speakers or their sponsors, prevented the talks from being made or otherwise disrupted them

While it may seem intuitive to prohibit any speech that is arguably hateful in nature, it is actually in society's best interest to let those ideas be heard. John Milton, famed 17th-century English writer, gave a strong defense of free expression in a speech on unlicensed printing called Areopagitica. 'As therefore the state of man now is; what wisdom can there be to choose, what continence to forbear without the knowledge of evil?' Milton questioned. ... 'How can we more safely, and with less danger scout into the regions of sin and falsity than by reading all manner of tractates, and hearing all manner of reason?' Milton asked.
Related Topics: Charles Murray, Freedom of Speech
John Milton (1608-1674), Religion & Liberty, Aug 2000

Milton argued that ... the people have the right to overthrow a monarch who abuses his power. ... Insisting fervently on humanity's rational freedom and responsible power of choice, Milton believed that liberty is best safeguarded by the strong moral character of a nation's citizens.
Milton - Hero of the Day, by Timothy Sandefur, The Daily Objectivist, 2000

John Milton (1608-1674) is well known as the greatest Christian poet, author of Paradise Lost. Less well known is his lifelong dedication to liberty. ... The book was controversial, and as it was published without government permission, Parliament considered banning it. This infuriated Milton, spurring him to pen the Areopagitica, the most beautiful defense of free press in the English language. '[A]s good almost kill a man as kill a good book; who kills a man kills a reasonable creature, God's image; but he who destroys a good Book, kills reason itself.'
The Triumph of Falsehood, by Steve Chapman, 8 Dec 2016
Discusses the proliferation of falsehoods in the news and social media during and after the 2016 U.S. presidential election and why the "fake news" sources tap into voters biases

In 1644, the English poet John Milton made an eloquent case against censorship. Freedom of thought and inquiry was not only a God-given prerogative but also the best protection against error: 'Let her and Falsehood grapple; who ever knew Truth put to the worse, in a free and open encounter?' Milton was fortunate enough to live before the internet. It has shown that among many people, truth doesn't have a chance in an encounter with manufactured falsehoods aimed at not only smearing enemies but obliterating the idea of objective reality.
Related Topic: Voting

Areopagitica: A Speech For The Liberty Of Unlicensed Printing To The Parliament Of England [PDF], 23 Nov 1644
A speech from poet John Milton defending freedom of speech and expression

... books are not absolutely dead things, but do contain a potency of life in them to be as active as that soul was whose progeny they are; nay, they do preserve as in a vial the purest efficacy and extraction of that living intellect that bred them. ... Give me the liberty to know, to utter, and to argue freely according to conscience, above all liberties.
Related Topic: Freedom of Speech

8. Areopagitica, by John Rogers, 21 Nov 2008
Recording of the Yale University Fall 2007 course on John Milton; discusses Areopagitica, the English Revolution, Parliament at that time, freedom of the press, censorship and print licensing, and parallels to Paradise Lost

The introductory paragraph uses material from the Wikipedia article "John Milton" as of 26 Jul 2018, which is released under the Creative Commons Attribution-Share-Alike License 3.0.