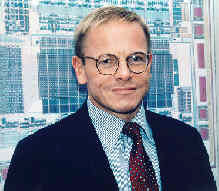 Sounds like a character in an Ayn Rand novel. But these lines were spoken by a real-life entrepreneur.

Silicon Valley is often taken as a symbol of capitalism at its best. But the denizens of that sandy expanse too often disappoint by their reluctance to advocate openly the open market that makes their achievement possible. Some of them are, indeed, downright antagonistic to freedom of competition, as demonstrated by their willingness to jump on the anti-Microsoft bandwagon in the recent anti-trust case.

Then there's T.J Rodgers. Founder and CEO of Cypress Semiconductors, Rodgers is famous for his outspoken support of the untrammeled market—and of the producer's unqualified right to profit from it.

Rodgers has testified in Congress against government subsidies of the computer business. He has argued against restricting legal immigration. He has fought against anti-trust laws and for the rights and freedom of Microsoft.

A couple years ago, Rodgers appeared along with David Kelley on an explosive network special, "Greed," hosted by John Stossel—an unprecedented prime-time showcase for the morality of rational self-interest. "I'm proud of myself. I'm a good guy," he told Stossel.

Starting from scratch, Rodgers built his company into a major player in the semiconductor industry, now worth more than a billion dollars. He earned every penny he owns, he said.

Rodgers once publicly rebuked a nun who demanded he appoint more minorities and women to his corporate board, explaining that her demand was unsound and immoral.

Bill Gates should take a leaf from the Rodgers rule book.