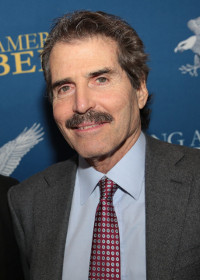 Stossel is the most effective presenter of pro-liberty views on network television. His recent greatly appraised one-hour special entitled John Stossel Goes to Washington was a good testimony to his genius. He has been an ABC correspondent for the newsmagazine 20/20 since June 1981 and was recently named co-host of the show. Since April 1994, he has hosted his own full-hour specials on such controversial subjects as happiness, sex, drugs, teenagers, freeloaders, lawsuits and supernatural phenomena. Greed, where Objectivist philosopher David Kelley appeared, excited the greatest interest among libertarians.

Center for Independent Thought, Board member

Stossel In the Classroom
A project of the Center for Independent Thought, distributes Stossel's videos to high school classrooms; includes video library, essay and video contests and resources for teachers and students

Stossel in the Classroom videos are created to encourage critical thinking in schools. By making it easy for teachers to include a fresh perspective in their classroom, these videos have inspired millions of students to expand their understanding of free markets, and of life. Each DVD includes a teacher guide with lesson plans and ideas for complementary activities. In addition to our free DVDs, we also offer streaming videos, which can be browsed by category or searched by keyword. The segments from our free DVDs are also available to stream.

John Stossel — arguably the highest-profile libertarian journalist in the world — joined Fox News Channel (FNC) and Fox Business Network (FBN), effective October 2009, to begin a weekly show that may well be the most consistent, intelligent, ongoing presentation of libertarian views in television history. Stossel said Fox offered him the opportunity to air his uncompromising libertarian viewpoint much more often than he was able to do at ABC. ... As 20/20 co-host, when he uttered his signature catch-phrase — 'Give me a break!' — there's a good chance he's talking about some government program, regulation or policy.

Borderlands: What’s Happening to America?, by Sheldon Richman, 30 Jul 2014
Discusses the extension of border patrol activities in the United States well beyond (100 miles) the traditional country and coastline limits

A man, an American citizen, sits in his car as a U.S. Border Patrol agent insists that he roll down his window. He refuses. Agents use battering rams to smash the windows. Still, the driver refuses to leave his car, so he is hit with a Taser from two sides. He screams ... this scene, captured on video and shown recently on John Stossel's Fox News special "Policing America," had happened ... far from the border. The U.S. government regards a large part of the country as close enough to a border or coast to justify treating individuals — citizens or not — as though they have no rights whatsoever.
Related Topics: Arizona, Right Against Unreasonable Searches and Seizures, United States
Clint Eastwood announces: I'm a "libertarian", Libertarian Party News, 18 Feb 1997
Libertarian Party press release based on Eastwood's response to a Playboy interview question: "How would you characterize yourself politically?"

Award-winning news correspondent John Stossel was named co-anchor of '20/20' in May 2003. He joined the highly acclaimed newsmagazine in 1981 and began doing one-hour primetime specials in 1994. In addition to longer in-depth reports ... on subjects ranging from addiction to parenting issues in his 'Family Fix' segments, Stossel is featured in a recurring segment entitled 'Give Me a Break.' ... In his early years at ABC, Stossel was consumer editor at Good Morning America. ... He began his journalism career as a researcher for KGW-TV in Portland, Ore. Stossel is a 1969 graduate of Princeton University, with a B.A. in psychology.
John Stossel Gets a Break, by Tim Cavanaugh, 5 Mar 2004
Review of Stossel's Give Me a Break (2004)

Stossel is an especially sharp observer of this phenomenon because he delights in telling us about his own sloppy thinking: The first half of the book recounts his development as a rational critic of regulation. Stossel grew wealthy and famous as a do-gooder muckraker exposing corporate swindles. It was, as he notes, only when he began to lump government and sanctimonious activists in with the swindlers that the Emmys stopped coming (though he has grown even more successful). ... It's even more heartening that he is the host of a network television show. ... Stossel is a genius with the common touch.
John Stossel - Hero of the Day, The Daily Objectivist, 2000
Discusses the ABC News special on "Greed" hosted by Stossel and some of his career

A show like 'Greed' succeeds partly because of the interview subjects. ... But of course the main credit goes to Stossel, who impresses the viewer as eminently reasonable, willing to give a fair hearing to the opposition, go where the truth leads him. That's what his career has been about. John Stossel began at ABC as a consumer reporter exposing the likes of a fifty-dollar 'solar-powered clothes dryer' that turned out to be a clothes line. ... Over the years, he came to realize that cheating is the self-defeating exception in the world of business, and his reporting started to take on a different focus.
Peter McWilliams (1950-2000) - Libertarian
Includes picture, biographical/memorial article, quotes from McWilliams and remembrance quotes from other libertarians

On June 9, 2000, McWilliams had appeared on the 'Give Me A Break!' segment of ABC Television's 20/20, where host John Stossel noted, '[McWilliams] is out of prison on the condition that he not smoke marijuana, but it was the marijuana that kept him from vomiting up his medication. I can understand that the federal drug police don't agree with what some states have decided to do about medical marijuana, but does that give them the right to just end run those laws and lock people up? Give me a break! [It] seems this War on Drugs often does more harm than the drugs themselves.'
Related Topic: Peter McWilliams
Piercing through Myths, Lies, and Stupidity, by George Leef, Freedom Daily, Aug 2006
Review of Stossel's Myths, Lies, and Downright Stupidity (2006)

John Stossel ... is a rarity among the ranks of American media personalities. He's a skeptic when it comes to everything except freedom. He even calls himself a libertarian. Over the years, he has made a very good career in TV journalism, poking holes in the self-inflated posturing of union leaders, environmental zealots, businessmen who demand government favors, and, most of all, politicians. Stossel's favorite move is to confront such people with hard questions and then record their answers (usually evasions, unresponsive hostility, or pure blather) for the public to evaluate.
Related Topics: Compulsory Education, Farming, Government, Occupational Licensing, Politics, Moral Repression

"If you have 10,000 regulations," Winston Churchill said, "you destroy all respect for law." He was right. But Churchill never imagined a government that would add 10,000 year after year. That's what we have in America. We have 160,000 pages of rules from the feds alone. States and localities have probably doubled that. We have so many rules that legal specialists can't keep up ... I wish our politicians knew that. I wish they'd stop their presumptuous schemes. We need to end the orgy of rule-making at once and embrace the simple rules that true liberals like America's founders envisioned.
Related Topics: Economics, Lǎozǐ, Law, Ludwig von Mises, Society
Confessions of a Welfare Queen: How rich bastards like me rip off taxpayers for millions of dollars, Reason, Mar 2004
Discusses the National Flood Insurance Program, subsidies to farmers and farm corporations (such as Archer Daniels Midland) and Donald Trump's attempt to use eminent domain to expand a casino in Atlantic City

Ronald Reagan memorably complained about "welfare queens," but he never told us that the biggest welfare queens are the already wealthy. Their lobbyists fawn over politicians, giving them little bits of money—campaign contributions, plane trips, dinners, golf outings—in exchange for huge chunks of taxpayers' money ... more [such victories] will require a great deal of diligence on the part of citizens—and the news media. If we want to live up to the old saw that the press should "comfort the afflicted and afflict the comfortable," the TV cameras need to spend more time focused on the ugly realities of welfare for the rich.
Related Topics: Eminent Domain Protections, Farming, Free Market, Government, Institute for Justice, Walter E. Williams

As Jonathan Rauch says in his excellent book ... 'Kindly Inquisitors: The New Attacks on Free Thought' in America, in France, in Austria, in Australia and elsewhere, the old principle of the inquisition is being revived. People who hold wrong and hurtful opinions should be punished for the good of society. If they cannot be put in jail, then they should lose their jobs, be subjected to campaigns of vilification, be made to apologize, be pressed to recant. If government cannot do the punishing, then private institutions and pressure groups should do it. I think this is a dangerous idea, and a threat to free thought.
Related Topic: Freedom of Speech
Into it: John Stossel, by John Stossel, Stephen Humphries, The Christian Science Monitor, 16 Jun 2006
Stossel is asked about he is reading, listening and watching, and then questions related to his book Myths, Lies, and Downright Stupidity

Where did the idea for the book come from?
Really the subtitle says it – my repeated experience at finding out what I thought was so, was not ...
Of all the myths in the book that you debunk and demolish, which one surprised you the most?
What I learned about education was the biggest jolt, which was also my learning experience doing my show "Stupid in America" recently ...
The thing that surprised me most in your book was that anyone can walk on hot coals.
I was pretty hesitant, myself. I wasn't the first to go. You can feel some heat but, if you kept moving, it didn't burn.
Related Topics: Compulsory Education, Pursuit of Happiness

While preparing a 20/20 segment on multiple chemical sensitivity that aired in January, John Stossel sent ABC associate producer Deborah Stone and her sister-in-law, Julie, to Dr. Grace Ziem, an MCS specialist in Baltimore. Prior to the visit, Ziem sent the two healthy women a 16-page questionnaire ... The National Press Club has recognized him five times for excellence in consumer reporting ... exposing scams has been a persistent theme in Stossel's career as a consumer reporter, and he continues to go after hucksters, swindlers, and charlatans, even when they happen to work for the government or serve a fashionable cause.
Related Topics: Business, Free Market, Government, Television Shows

Give Me a Break: How I Exposed Hucksters, Cheats, and Scam Artists and Became the Scourge of the Liberal Media..., 2004
Partial contents: What Happened to Stossel? - Scaring Ourselves to Death - Junk Science and Junk Reporting - Government - Welfare for the Rich - The Trouble with Lawyers - The Left Takes Notice - But What About the Poor? - Owning Your Body - Free Speech

Are We Scaring Ourselves to Death?, ABC News Special, 21 Apr 1994
Greed, 3 Feb 1998
Is America # One?, 19 Sep 1999
ABC News special; starts by comparing the U.S., India and Hong Kong and then posits reasons for prosperity in the U.S.
Related Topic: United States
John Stossel Goes to Washington, 27 Jan 2001
Related Topic: Washington, D.C.
The War on Drugs: A War on Ourselves?, 30 Jul 2002
ABC News special; includes police baiting, the unintended consequences of prohibition, the drug war in Colombia, right to choose, hard drugs and legalization in Europe and the U.S.
Related Topic: War on Drugs

The introductory paragraph uses material from the Wikipedia article "John Stossel" as of 19 May 2018, which is released under the Creative Commons Attribution-Share-Alike License 3.0.