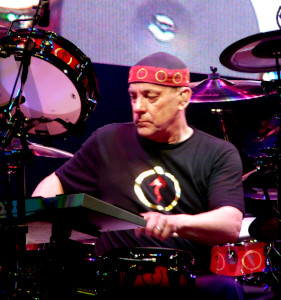 Neil Ellwood Peart, OC (12 September 1952 - 7 January 2020), was a Canadian musician, songwriter, and author, best known as the drummer and primary lyricist for the rock band Rush. Peart earned numerous awards for his musical performances, including an induction into the Modern Drummer Readers Poll Hall of Fame in 1983, making him the youngest person ever so honored. His drumming was renowned for its technical proficiency and his live performances for their exacting nature and stamina.

There are good drummers. There are great drummers. And then there's Neil Peart of the Canadian progressive rock band Rush. Peart (pronounced "Peert") is one of the most honored and influential drummers in rock history. Known for his massive drum kit, exotic percussion instruments, and complicated solos, he was inducted into Modern Drummer's Hall of Fame in 1983 ... In an online chat on www.2112.net (November 4, 1993), Peart ... said. "Yes, I believe the individual is paramount in matters of justice and liberty, but in philosophy, as Aristotle said long ago, the paramount good is happiness."
Related Topic: Rush

Neil Peart - Hero of the Day, by Mike Dominic, The Daily Objectivist, 2000

As the drummer and lyricist for the rock group Rush, Neil Peart (b. 1952) has spearheaded a movement of technical excellence and philosophical relevance in rock music for over 25 years. Peart began playing drums in his early teens, influenced by such distinctive musical styles as those of Gene Krupa and Keith Moon. Originally a resident of Ontario, at eighteen Peart moved to England, where he discovered the work of Ayn Rand. He joined Rush in 1974 ... Peart is also an accomplished author and world traveler. In his book The Masked Rider, he recounts his bicycle trip through Cameroon.
Related Topic: Rush

The introductory paragraph uses material from the Wikipedia article "Neil Peart" as of 12 Jul 2020, which is released under the Creative Commons Attribution-Share-Alike License 3.0.