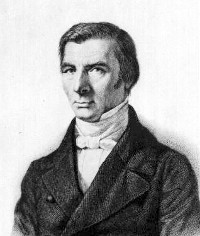 Frédéric Bastiat (1801-1850), French economist, was the son of a merchant of Bayonne, and was born in that town on the 30th of June 1801. Educated at the colleges of Saint-Sever and of Sorèze, he entered in 1818 the counting house of his uncle at Bayonne. The practical routine of mercantile life being distasteful to him, in 1825 he retired to a property at Mugron, of which he became the owner on the death of his grandfather. Here Bastiat occupied himself with farming, his leisure being devoted to study and meditation. He welcomed with enthusiasm the Revolution of 1830. In 1831 he became a juge de paix of his canton, and in 1832 a member of the conseil général of Landes. In 1834 he published his first pamphlet, and between 1841 and 1844 three others, all on questions of taxation affecting local interests. During this period an accidental circumstance led him to become a subscriber to an English newspaper, the Globe and Traveller, through which he was made acquainted with the nature and progress of the crusade of the Anti-Corn-Law League against protection. After studying the movement for two years, he resolved to inaugurate a similar movement in France. To prepare the way, he contributed in 1844 to the Journal des Économistes an article "Sur l'influence des tarifs anglais et français", which attracted great attention, and was followed by others, including the first series of his brilliant Sophismes Économiques.

In 1845 Bastiat came to Paris in order to superintend the publication of his Cobden et la Ligue, ou l'agitation anglaise pour la liberté des échanges, and was very cordially received by the economists of the capital. From Paris he went to London and Manchester, and made the personal acquaintance of Cobden, Bright and other leaders of the league. When he returned to France he found that his writings had been exerting a powerful influence; and in 1846 he assisted in organizing at Bordeaux the first French Free Trade Association (Association pour la Liberté des Échanges). The rapid spread of the movement soon required him to abandon Mugron for Paris.

During the eighteen months which followed this change his labors were prodigious. He acted as secretary of the central committee of the association, organized and corresponded with branch societies, waited on ministers, procured subscriptions, edited a weekly paper, the Libre-Échange, contributed to the Journal des Économistes and to three other periodicals, addressed meetings in Paris and the provinces, and delivered a course of lectures on the principles of political economy to students of the schools of law and of medicine. The cause to which he thus devoted himself at the expense of his health and life appeared for a time as if it would be successful; but the forces in its favor were much weaker and those opposed to it were much stronger in France than in England, and this became more apparent as the struggle proceeded, until it was brought to an abrupt end by the Revolution of February 1848. This event made the socialistic and communistic principles, which had been gathering and spreading during the previous thirty years, temporarily supreme. In this grave crisis Bastiat nobly performed his duty. Although exhausted by the far too heavy labors in which he had been engaged, although robbed of his voice by the malady which was preying upon him, so that he could do but little to defend the truth from the tribune of the Constituent Assembly, he could still suggest wise counsels in the committee of finance of which he was vice-president, and he could still use his pen with a vigor and dexterity which made him capable of combating single-handed many opponents.

He wrote in rapid succession a series of brilliant and effective pamphlets and essays, showing how socialism was connected with protection, and exposing the delusions on which it rested. Thus within the space of two years there appeared Propriété et Loi, Justice et Fraternité, Propriété et Spoliation, L'État, Baccalauréat et Socialisme, Protectionisme et Communisme, Capital et Rente, Maudit Argent, Spoliation et Loi, Gratuité du Credit, and Ce qu'on voit et ce qu'on ne voit pas. While thus occupied he was meditating the composition of a great constructive work, meant to renovate economical science by basing it on the principle that "interests, left to themselves, tend to harmonious combinations, and to the progressive preponderance of the general good". The first volume of this work Les Harmonies économiques was published in the beginning of 1850. In the autumn of that year, when working on the second volume, the increase of his malady compelled him to go to Italy. After lingering at Pisa and Florence he reached Rome, but only to die there on the 24th of December 1850 in the fiftieth year of his age.

The life-work of Bastiat, in order to be fairly appreciated, requires to be considered in three aspects. (1) He was the advocate of free trade, the opponent of protection. The general principles of free trade had, of course, been clearly stated and solidly established before he was born, but he did more than merely restate them. He showed, as no one before him had done, how they were practically applicable to French agriculture, trade and commerce; and in the Sophismes Économiques we have the completest and most effective, the wisest and the wittiest exposure of protectionism in its principles, reasonings and consequences which exists in any language. (2) He was the opponent of socialism. In this respect also he had no equal among the economists of France. He alone fought socialism hand to hand, body to body, as it were, not caricaturing it, not denouncing it, not criticizing under its name some merely abstract theory, but taking it as actually presented by its most popular representatives, considering patiently their proposals and arguments, and proving conclusively that they proceeded on false principles, reasoned badly and sought to realize generous aims by foolish and harmful means. Nowhere will reason find a richer armory of weapons available against socialism than in the pamphlets published by Bastiat between 1848 and 1850. (3) He attempted to expound in an original and independent manner political economy as a science. In combating, first, the Protectionists, and, afterwards, the Socialists, there gradually rose on his mind a conception which seemed to him to shed a flood of light over the whole of economical doctrine, and, indeed, over the whole theory of society, viz. the harmony of the essential tendencies of human nature. The radical error, he became always more convinced, both of protectionism and socialism, was the assumption that human interests, if left to themselves would inevitably prove antagonistic and anti-social, capital robbing labor, manufactures ruining agriculture, the foreigner injuring the native, the consumer the producer, etc.; and the chief weakness of the various schools of political economy, he believed, he had discovered in their imperfect apprehension of the truth that human interests, when left to themselves, when not arbitrarily and forcibly interfered with, tend to harmonious combination, to the general good.

His Œuvres complètes are in seven volumes. In the second edition, the first volume contains an interesting Memoir by Prosper Paillottet.

This article is derived from the The Encyclopædia Britannica, Eleventh Edition article "Bastiat, Frédéric" published in 1911, which is in the public domain.