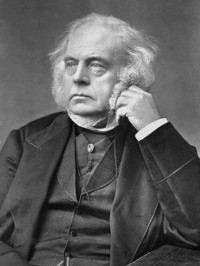 John Bright (16 November 1811 – 27 March 1889) was a British Radical and Liberal statesman, one of the greatest orators of his generation and a promoter of free trade policies.

John Bright was a British radical, statesman, and advocate of free trade. With Richard Cobden, Bright successfully agitated for the repeal of Great Britain's Corn Laws, which were import tariffs on grain. Bright also was a proponent of a peaceful, noninterventionist foreign policy, arguing, for instance, against British involvement in the Crimean War, a position that briefly cost him his seat in Parliament. In addition, Bright argued passionately against the Established Church and slavery, as well as for greater independence for Britain's colonies.
Related Topics: Richard Cobden, Free Trade

Rochdale Folk: John Bright
Site of the Metropolitan Borough of Rochdale, "The Birthplace of Cooperation", where Bright was born

Probably the most famous and successful of the personalities on the Rochdale scene in the 19th century was John Bright. Bright was front and centre in all of the political and labour struggles of the time ... He led the fight in Rochdale to oppose the payment of a tax to the Anglican Parish Church. ... He also played a leading role alongside Richard Cobden in the campaign to repeal the Corn Law. ... It was Bright who, as a member of Parliament, was highly influential in convincing the Prime Minister, Sir Robert Peel, to repeal the law in 1846 and begin an era of Free Trade in the country.

The Greatness of Peace Activist John Bright, by Sheldon Richman, The Goal Is Freedom, 24 May 2013
Commentary on John Bright's opposition to war and interventionism. with relevant excerpts to several of his speeches

Bright ... is best known for leading (with Richard Cobden) Britain's Anti-Corn Law League ... He was also a manufacturer, a member of Parliament, and an eloquent orator. Bright passionately opposed war — however popular — whenever it threatened to rear its ugly head. Free trade (free markets generally) and peace were not separate matters for Bright. On the contrary, they were (in Cobden's phrase) "one and the same cause." Bright made many speeches on behalf of peace and against Britain's interventionist foreign policy, both in Parliament and before private meetings ... These speeches are entirely relevant today.
Related Topics: Ethics, United Kingdom, War
John Bright: Voice of Victorian Liberalism, by Nicholas Elliott, The Freeman, Aug 1988
Biographical essay, discussing in detail many of Bright's activities, in and out of Parliament, such as the repeal of the Corn Laws, opposition to the Crimean War, his view on colonial India and the United States, Parliamentary reform and Ireland

John Bright did more than anyone else to bring about the great advances for liberty in nineteenth-century Britain. A leading orator and agitator, he was considered by many to be the best political speaker of the century. His voice contained a quiet passion which captivated fellow members of Parliament and roused the many thousands he addressed at public meetings. ... His most famous words were these: 'The Angel of Death has been abroad throughout the land; you may almost hear the beating of his wings. ... he takes his victims from the castle of the noble, the mansion of the wealthy, and the cottage of the poor and lowly.'
Related Topics: American War Between the States, Free Trade, India, Republic of Ireland, Voting, War
Libertarian Class Analysis, by Sheldon Richman, Freedom Daily, Jun 2006
Examines the class analysis of Charles Comte, Charles Dunoyer and Augustin Thierry and its basis on the work of J. B. Say, drawing on writings by Ralph Raico, Leonard Liggio, David M. Hart and Walter E. Grinder

[P]olitical and economic history is the record of conflict between producers, no matter their station, and the parasitic political classes, both inside and outside the formal state. Or to use terms of a later subscriber to this view, John Bright, it was a clash between the tax-payers and tax-eaters ... [Raico] quotes Bright on the fight against the Corn Laws (grain import tariffs):

I doubt that it can have any other character [than that of] ... a war of classes. I believe this to be a movement of the commercial and industrial classes against the Lords and the great proprietors of the soil.

The insights of Adam Smith were later amplified by the two leading representatives of the Manchester School, Richard Cobden and John Bright, who vigorously campaigned on behalf of a strict noninterventionist foreign policy for England. While most people are probably aware that Cobden and Bright led the struggle to repeal the Corn Laws—as oppressive interference with free trade—relatively few are aware of their extensive involvement in the peace movement in England or, in particular, their outspoken opposition to England's involvement in the Crimean War.
Related Topics: Latin America, Banking, Richard Cobden, John T. Flynn, Foreign Entanglements, Garet Garrett, Imperialism, Leonard Liggio, Militarism, George Orwell, Murray Rothbard, Jean-Baptiste Say, Joseph Schumpeter, Adam Smith, Joseph R. Stromberg, William Graham Sumner
Richard Cobden's Triumphant Crusade for Free Trade and Peace, by Jim Powell, The Freeman, Jun 1995
Extensive biographical essay, including Cobden's relationship with John Bright as they campaigned for repeal of the Corn Laws, and his later peace activism

In 1836 or 1837, Cobden was asked by a man named John Bright to give a talk on education, and the two hit it off. Bright, born on November 16, 1811, was the son of a Rochdale cotton spinner. Like Cobden, his formal education ended with grammar school, but he pursued his love for English literature. As a Quaker whose ancestors had been imprisoned for their Nonconformist (non-Church of England) views, Bright developed a moral fervor about current affairs. He honed his speaking abilities in public squares, church meetings, and other gatherings.
Related Topics: Richard Cobden, Free Trade, Republic of Ireland, War

On the English Foreign Policy, 29 Oct 1858
Speech given to the Birmingham Chamber of Commerce; criticizes British militarism and imperialism, pointing out the effects of several 19th century wars on national debt, poverty and families

I believe that I understate the sum when I say that, in pursuit of this will-o'-the-wisp (the liberties of Europe and the balance of power), there has been extracted from the industry of the people of this small island no less an amount than £2,000,000,000 sterling. ... I presume it is something like those vast and incomprehensible astronomical distances ... if war has provided you with a trade, it has been at an enormous cost; but I think it is by no means doubtful that your trade would have been no less in amount and no less profitable, had peace and justice been inscribed on your flag instead of conquest and the love of military renown.
Related Topics: Foreign Entanglements, Imperialism, Taxation, War

It was originally intended that all the Speeches contained in these volumes should have had the advantage of Mr. Bright's revision. Mr. Bright has done this service to those which are contained in the first volume. But, after he had given the same assistance to a few sheets in the second, he was unhappily seized with illness, and has been unable to give his further supervision to the work. It is hoped that this loss will not detract too much from the value of this publication.

The introductory paragraph uses material from the Wikipedia article "John Bright" as of 6 Jun 2018, which is released under the Creative Commons Attribution-Share-Alike License 3.0.