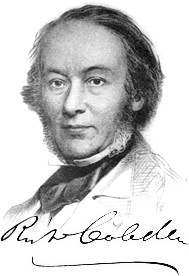 Richard Cobden is best remembered for his partnership with John Bright in heading the movement in Britain to repeal the tariff on imported grain, known as the Corn Laws. Cobden also was a dedicated advocate of international peace and an uncompromising opponent of war. ... Cobden also was committed to constitutional reform; to the disestablishment of state churches; and to a series of social reforms, including the repeal of the primogeniture laws, entails in land, the game laws; and, most important, the abolition of slavery. He was a firm exponent of fiscal retrenchment and tax reform.
Related Topics: Free trade, War

Richard Cobden (1804-1865) was a member of the British Parliament and an advocate of free trade, a non-interventionist foreign policy, peace, and parliamentary reform. He is best remembered for his activity on behalf of the Anti-Corn Law League which helped reduce British tariffs in 1846 and for negotiating the Anglo-French trade agreement of 1860.

... during his life, Bright was best known as an orator, fiery and radical in speech, whereas Cobden, his associate ..., was considered more pragmatic and measured. ... In 1839, he joined with Cobden, already a well-established statesman, to found the Anti-Corn Law League, tirelessly arguing across the British Isles for free trade. In their near-constant tours on behalf of the cause of liberalized trade, Cobden would speak first, giving the reasoned case for reform, with Bright to follow with a more polemical appeal. ... Cobden died in 1865, with Bright at his side.
Related Topics: John Bright, Free trade
Frederic Bastiat, Ingenious Champion for Liberty and Peace, by Jim Powell, The Freeman, Jun 1997
Biographical essay of Frédéric Bastiat, covering those who influenced him as well as those influenced by him, his writings (including correspondence with his friend Coudroy), his roles in the French Constituent and Legistative Assemblies and his legacy

While going through some London newspapers, Bastiat was thrilled to read about how textile entrepreneurs Richard Cobden and John Bright led the Anti-Corn-Law League, a crusade for free trade. Bastiat began gathering material for a book on the Anti-Corn-Law League, and he started corresponding with Cobden. The Englishman was then about 40, and according to a friend, he could often be seen "half skipping along a pavement, or a railway platform, with the lightness of a slim and dapper figure, and a mind full bent upon its object." In July, Bastiat crossed the English Channel to see Cobden.
Related Topics: Frédéric Bastiat, Foundation for Economic Education, Benjamin Franklin, Free trade, Government, Henry Hazlitt, Law, The Law, Libertarianism, Liberty, Gustave de Molinari, Rights, Jean-Baptiste Say, Adam Smith, Socialism, The State
Jane Cobden: Carrying on Her Father's Work, by Sheldon Richman, The Goal Is Freedom, 25 Jul 2014
Biographical essay on Jane Cobden, daughter of Richard Cobden, who continued her father's advocacy of free trade and other ideals

Most famously, [Cobden] cofounded—with John Bright—the Anti–Corn Law League, which successfully campaigned for repeal of the import tariffs on grain. Those trade restrictions had made food expensive for England's working class while enriching the landed aristocracy. But Cobden did not see free trade in a vacuum. He and Bright linked that cause with their campaign against war and empire, arguing that trade among the people of the world was not just beneficial economically but also conducive to world peace ... Cobden understood that free trade means trade free of government even when it pursues allegedly pro-trade policies.
Related Topics: Free trade, Republic of Ireland, Libertarianism, Voting
Non-Marxist Theories of Imperialism, by Alan Fairgate, Reason, Feb 1976
Examines writings of critics of imperialism that are not based on Marxist analysis

On June 3, 1804, Richard Cobden was born. Nicknamed the 'Apostle of Free Trade,' he spearheaded the campaign against the protectionist English Corn Laws, leading to their repeal in 1846, which then spread to the liberalization of trade throughout much of Europe. His role was so great that it has been said the free market owes its existence to him.
Related Topic: Free trade
Richard Cobden: Creator of The Free Market: Cobden broke down protectionist trade laws in England, by John Chodes, The Freeman, Mar 1993
Examines the Corn Laws, Cobden's success as a merchant and his activism in favor of free trade

In the midst of all this lived a successful young Manchester textile manufacturer named Richard Cobden. He saw the social injustice, and it made him furious. He was determined to change it, and he did. ... seven years later, England had undergone a revolutionary economic, political, and social change. Taxes on grain had been decimated. Unequaled prosperity flooded England.
Related Topic: Farming
Richard Cobden's Triumphant Crusade for Free Trade and Peace, by Jim Powell, The Freeman, Jun 1995
Extensive biographical essay, including Cobden's relationship with John Bright as they campaigned for repeal of the Corn Laws, and his later peace activism

The nineteenth century was the most peaceful period in modern history. ... In all this, one name towers above the rest: Richard Cobden, the straight-talking English textile entrepreneur who gave up his business to crusade during three crucial decades. He pursued the most successful political strategies for free trade. He articulated the moral case which proved decisive. His inspired speeches attracted thousands of people at a time and raised plenty of money. He traveled throughout Europe, the United States, North Africa, and the Near East, spreading the gospel of free trade to kings and commoners alike.
Related Topics: John Bright, Free trade, Republic of Ireland, War
To Defeat the Assault on Liberty, Our Appeals Must Be Moral, by Jim Powell, 13 May 2013
Argues, by providing several historical examples, that "compelling moral appeals for liberty" are needed to confront various current problems such as government spending and debt, higher taxes and disregard of constitutional limits on executive power

The case for free trade had been made mainly with economic arguments about how consumers benefited when they're free to buy from anyone they choose, including foreign suppliers often kept out of markets by trade restrictions. Then came the British textile manufacturer Richard Cobden who, in 1838, envisioned a movement for free trade. "It appears to me," Cobden wrote an Edinburgh publisher, "that a moral and even a religious spirit may be infused into that topic [free trade], and if agitated in the same manner that the question of slavery has been, it will be irresistible."
Related Topics: United States Declaration of Independence, William Lloyd Garrison, Republic of Ireland, Liberty, Ronald Reagan, Slavery

The League and Sir Robert Peel, 15 Jan 1846
Speech to the National Anti-Corn-Law League, discussing their work over the past seven years and predicting immediate repeal of the Corn Laws in the upcoming session of Parliament

I look farther; I see in the Free Trade principle that which shall act on the moral world as the principle of gravitation in the universe, - drawing men together, thrusting aside the antagonism of race and creed and language, and uniting us in the bonds of eternal peace. ... I have speculated on what the effect of the triumph of this principle may be. I believe that the effect will be to change the face of the world, so as to introduce a system of government entirely distinct from that which now prevails.
Related Topics: Free Market, Free trade

It was originally intended that all the Speeches contained in these volumes should have had the advantage of Mr. Bright's revision. Mr. Bright has done this service to those which are contained in the first volume. But, after he had given the same assistance to a few sheets in the second, he was unhappily seized with illness, and has been unable to give his further supervision to the work. It is hoped that this loss will not detract too much from the value of this publication.

The introductory paragraph uses material from the Wikipedia article "Richard Cobden" as of 12 Jul 2018, which is released under the Creative Commons Attribution-Share-Alike License 3.0.