Herbert Spencer - Hero of the Day 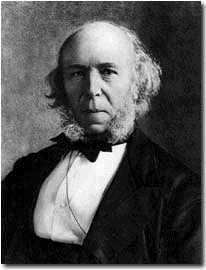 For years, Marxists derided liberals as thoroughly "undialectical" (read: anti-contextual) because their allegedly "atomistic" approach reduced social analysis to an abstract mental gymnastic on the life and times of Robinson Crusoe.

But the history of liberalism is replete with rich, textured, context-sensitive thinking. In this regard, Herbert Spencer (1820-1903) was one of the most important classical liberal thinkers to pioneer an alternative "dialectical libertarianism." His contributions to this project have yet to be fully appreciated, although his contributions to general systems theory in sociology are well known.

Hayek tells us too that Spencer's work had an impact on some of the early Austrian economic thinkers, including Friedrich von Wieser. But as Tibor Machan argues, Spencer was also among the first to provide "a full-blown scientific justification" for the liberal worldview, just as Marx had done for communism. (Of course, what Marx did for communism was not exactly helpful to the future of humanity.)

Spencer is a genuine contextualist, sensitive to the reciprocal relations among parts within a whole. It was Aristotle who first explored the mutual implications of "correlatives," such as "master" and "slave." Hegel stressed the same notion in his analysis of the relationship between "lord" and "bondsman." Like Aristotle and Hegel, Spencer explains "that correlatives imply one another," as surely as a father implies a child, a child the father.

An examination of the part of a whole must not reify that part as "an independent entity," or it will risk the misapprehension of "its relations to existence in general...." And the relations must not be viewed "statically," says Spencer, but "dynamically" and "organic[ally]". Spencer absorbs the organic metaphor from Aristotle in much the same way as Hegel did.

Spencer's dialectical sensibility embraces the whole network of social intercourse. Publishing long before Hayek, Spencer views society as a spontaneous "growth and not a manufacture." But, contra Marx, his focus on the "mutual dependence of parts" within a society and on the analytical "integrity of the whole" does not lead him to embrace the organic collectivism of traditional holistic approaches. He maintains that society lacks a collective brain, lacks a "corporate consciousness," and that since each person within the community retains an individual consciousness, the "corporate life must here be subservient to the lives of the parts, instead of the lives of the parts being subservient to the corporate life." As a society becomes more and more integrated, there is a greater need for heterogeneity and differentiation among the individuals who compose it.