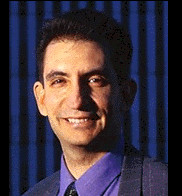 Chris Matthew Sciabarra (born 17 February 1960) is an American political theorist based in Brooklyn, New York. He is the author of three scholarly books—Marx, Hayek, and Utopia, Ayn Rand: The Russian Radical and Total Freedom: Toward a Dialectical Libertarianism—as well as several shorter works. He is also the co-editor, with Mimi Reisel Gladstein, of Feminist Interpretations of Ayn Rand. His work has focused on topics including Objectivism, libertarianism (particularly the work of Friedrich Hayek and Murray Rothbard) and dialectics.

Dr. Chris Matthew Sciabarra was born in Brooklyn, New York in 1960. He is the author of Ayn Rand: The Russian Radical, Total Freedom: Toward A Dialectical Libertarianism, and Ayn Rand, Homosexuality and Human Liberation. He is the co-editor with Mimi Reisel Gladstein of Feminist Interpretations of Ayn Rand, and also a coeditor of The Journal of Ayn Rand Studies. He has been a Visiting Scholar in the Department of Politics at New York University since January 1989.

Chris Matthew Sciabarra exploded onto the Objectivist scene in 1995 with the controversial tome Ayn Rand: The Russian Radical ... In the same week ... Sciabarra also published Marx, Hayek, and Utopia, a book partially derived from his doctoral dissertation (prompting Pete Boettke to observe at a book party for Chris that while other scholars must grind out their volumes slowly, Sciabarra produces them at the rate of "two a week") ... Sciabarra has just completed the third volume of his dialectical trilogy, Total Freedom, which considers the history of dialectical thought and treats the work of Murray Rothbard in depth.
Related Topic: Ayn Rand
Interview with Nathaniel Branden, by Nathaniel Branden, Karen Reedstrom, Full Context, Sep 1996
In two parts; topics range from David Kelley, objectivisim, Ayn Rand, his memoir Judgment Day, Barbara Branden, Leonard Peikoff, homosexuality, self-esteem and more

Q: You have expressed admiration for Dr. Sciabarra's book, Ayn Rand: The Russian Radical. What do you see as the chief importance of this book?
Branden: He has brought Ayn Rand into the history of philosophy. He has attempted to place her in a historical context. Whether or not he's right in all his hypotheses is not the most important point. So far, his is the book most likely to gain the interest of the academic community, and that interest is essential if one is thinking long-range about the spread of Objectivism. You've got to get the teaching of Objectivism into the universities.
Related Topics: Barbara Branden, Children, Ethics, David Kelley, Life, Romantic Love, Objectivism, Personal Responsibility, Psychology, Ayn Rand, Self-Esteem, Sexual Pleasure

Nathaniel Branden (born Nathan Blumenthal) is known to many as "the father of the self-esteem movement." Branden is the author of 20 books that explore the philosophical, psychological, and cultural foundations of individualism and the free society. Having developed a close personal relationship with novelist and philosopher Ayn Rand ... in 1958 [he] started Nathaniel Branden Lectures ... In his clinical practice, Branden stresses a variety of techniques “[t]o honor the self—to honor mind, judgment, values, and convictions” as “the ultimate act of courage” and the ultimate prerequisite for human freedom.
Related Topics: Nathaniel Branden, Ayn Rand, Society
Dialectics and Liberty, The Freeman, Sep 2005
Written ten years after publication of the first two of Sciabarra's "Dialectic and Liberty" trilogy, discusses Hayek's and Rand's dialectical analysis approaches and suggests that such context-keeping analysis is important in radical libertarian theory

Ten years ago the first two books of what has become known as my "Dialectics and Liberty" trilogy were published. Those books ... together with the culminating work ... constitute a defense of dialectical method in the service of a libertarian social theory ... What is required is a more fully developed critique of the system that generates such social problems—and a corresponding vision for social change ... A genuinely radical project beckons, one that integrates the explanatory power of libertarian social theory and the context-keeping orientation of dialectical method.
Related Topics: Aristotle, Capitalism, Dialectics, Friedrich Hayek, Libertarianism, Personal Responsibility, Ayn Rand, The Road to Serfdom, Socialism, Society, The State
Herbert Spencer - Hero of the Day, The Daily Objectivist, 2000
Argues that Spencer was a pioneer of "dialectical" (context-keeping) libertarianism

Herbert Spencer, Libertarian Dialectician? Yes, by God! For years, Marxists derided liberals as thoroughly "undialectical" ... because their allegedly "atomistic" approach reduced social analysis to an abstract mental gymnastic on the life and times of Robinson Crusoe ... In his conception of the social world, "whatever produces a diseased state in one part of the community must inevitably inflict injury upon all other parts." It is a "salutary truth" of the ideal community "that no one can be perfectly free till all are free; no one can be perfectly moral till all are moral; no one can be perfectly happy till all are happy."
Related Topics: Aristotle, Society, Herbert Spencer
How I Became a Libertarian, 19 Dec 2002
Autobiographical essay describing Sciabarra's influences on his road towards libertarianism, primarily Ayn Rand and Murray Rothbard

Growing up in Brooklyn, New York, born to a Greek and Sicilian family, I had some conservative predilections as a young high school student. One of my earliest high school teachers had a big influence on me; his name was Ira Zornberg. He was a faculty advisor of a social studies newspaper called Gadfly that I edited ... I'm only sorry that Murray didn't live to see my published work on Rand, which greatly interested him, or my Total Freedom, which devotes half of its contents to a discussion of his important legacy. And so: that's not only how I became a libertarian... but also how I've become a libertarian scholar.
Related Topics: Conservatism, Ayn Rand, Murray N. Rothbard
Rand, Ayn (1905-1982), The Encyclopedia of Libertarianism, 15 Aug 2008
Biographical and bibliographical essay, also examining Rand's relationships with several leading thinkers

Ayn Rand, a controversial novelist and philosopher, was born in Russia, but emigrated to the United States when she was 21. "For the record," she declared in her monthly periodical, The Objectivist, "I disapprove of, disagree with, and have no connection with, the latest aberration of some conservatives, the so-​called 'hippies of the right.'" ... Rand put forth an alternative vision for those libertarian feminists who sought to reclaim the women's movement as an outgrowth of classical liberalism and individualism. Although Rand died in 1982, her legacy lives on in many segments of the libertarian intellectual movement.
Related Topics: Ayn Rand, Nathaniel Branden, Capitalism, Friedrich Hayek, Libertarianism, H. L. Mencken, Ludwig von Mises, Objectivism, Isabel Paterson, Murray N. Rothbard

Is there a resurgence of sorts in Randian studies? If there is, and I wager this is true, then the most prominent of the neo-Randian scholars, Dr. Christopher Sciabarra, should take a tremendous amount of credit for it. Dr. Sciabarra, a visiting scholar at New York University, took an interest in Ayn Rand (and libertarianism by extension) early on in his academic career. ... In this, Chris Sciabarra explains his positions on Rand’s dialectical side, her views on feminism, the importance of context-keeping, & his relationship with the 'official' Objectivists headed by Leonard Peikoff.
Related Topics: Dialectics, David Kelley, Objectivism, Ayn Rand, Murray N. Rothbard, Russia

The introductory paragraph uses material from the Wikipedia article "Chris Matthew Sciabarra" as of 30 Nov 2017, which is released under the Creative Commons Attribution-Share-Alike License 3.0.