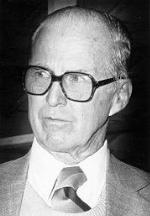 "...and it shall come to pass that when they shall be hungry, they shall fret themselves and curse their King and their God...."
— Isaiah 8:21

When the earth didn't produce enough to eat, ancient man had no recourse but to pray or curse—and watch his children starve. Even at the high tide of the Enlightenment, the optimistic Benjamin Franklin could only dream that much more might be coaxed from the soil. In 1780, he wrote to Joseph Priestley:

"It is impossible to imagine the height to which may be carried, in a thousand years, the power of man over nature...Agriculture may diminish its labor and double its produce..."

Meet the man who realized the hopes of Franklin in something less than a millennium, and whose work, according to sober estimates, has led to the saving of a billion lives: Norman Borlaug, father of the Green Revolution, the man who fed the world.

In 1963, after twenty years of research, Dr. Borlaug's team began shipping their hybrid "Mexican Dwarf" wheat seeds to India, which was then importing one fifth of the American wheat harvest and still teetering on the edge of starvation. The new seeds soon more than doubled their yield of wheat per acre. In only five years India's annual crop surged from 12 million to 20 million tons. They now produce 70 million tons, and export wheat for the world market.

In 1970 Dr. Borlaug received a Nobel Prize for the work of his institute.

But today, around the world, politicians are succumbing to anti-biotech hysteria. Bio-Luddites who think a eukaryote is something you take home from a Greek restaurant are loudly opposing genetically-modified "frankenfoods" and the corporations that make them.

"Biotechnology will help us do things that we couldn't do before, and do it in a more precise and safe way," he told Reason magazine. As to biotech's alleged menace to species diversity: "If we grow our food and fiber on the land best suited to farming with the technology that we have and what's coming, including proper use of genetic engineering and biotechnology, we will leave untouched vast tracts of land, with all of their plant and animal diversity..."

Dr. Borlaug is old enough to remember the 1930s, when Joseph Stalin installed his politically-correct pet, the crackpot Professor Lysenko, as head of all Russian biological and agricultural research, thereby stifling progress for a generation. Recalling that ugly episode, he noted that there's "an element of Lysenkoism all tangled up with this pseudoscience and environmentalism. I like to remind my friends what pseudoscience and misinformation can do to destroy a nation."

Of course, he's only the scientist who saved more human lives than anyone else in history. What does he know?