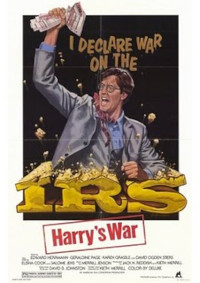 'Taxes are the lifeblood of this nation,' begins this comedy about a man who decides to declare war on the Unitest States tax collection agency, the I.R.S., after a 12 year personal vendetta of an I.R.S. agent against an old lady. Being a comedy, this man's protest is responded to by holing him up in his home, surrounding it with tanks, declaring his children hostages... Where do they come up with such unbelievable stuff?
Harry's War (1981)
by Jon Osborne, Miss Liberty's Guide to Film and Video

This is one of the most popular films among libertarians, and with good reason. It tells the story of a man who becomes galvanized to resist the U.S. Internal Revenue Service when his beloved aunt dies in tax court after unending harassment at IRS hands. He is not a superhero but an ordinary, naive, vulnerable person who only gradually realizes how much arbitrary power the IRS has been given.

The introductory paragraph uses material from the Wikipedia article "Harry's War (1981 film)" as of 6 Oct 2018, which is released under the Creative Commons Attribution-Share-Alike License 3.0.