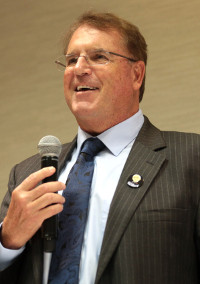 Thomas James DiLorenzo (born 8 August 1954) is an American economics professor at Loyola University Maryland Sellinger School of Business. He identifies himself as an adherent of the Austrian School of economics. He is a research fellow at The Independent Institute, a senior fellow of the Ludwig von Mises Institute, Board of Advisors member at CFACT and an associate of the Abbeville Institute. He holds a Ph.D. in Economics from Virginia Tech.

Thomas DiLorenzo is professor of economics at Loyola University Maryland and a member of the senior faculty of the Mises Institute. He is the author of The Real Lincoln; How Capitalism Saved America; Lincoln Unmasked; Hamilton's Curse; Organized Crime: The Unvarnished Truth About Government; and The Problem with Socialism.

Frederic Bastiat (1801-1850): Between the French and Marginalist Revolutions
Biographical and bibliographical essay which also analyzes Bastiat's ideas in relation to the Austrian School

Claude Frederic Bastiat was a French economist, legislator, and writer who championed private property, free markets, and limited government. Perhaps the main underlying theme of Bastiat's writings was that the free market was inherently a source of "economic harmony" among individuals, as long as government was restricted to the function of protecting the lives, liberties, and property of citizens ... that is exactly the model of scholarship that Mises himself adopted, which was carried forward most aggressively and brilliantly by Murray Rothbard, all in the tradition of the great French Austrian economist, Frederic Bastiat.
Related Topics: Frédéric Bastiat, Capitalism, Economics, Austrian Economics, Free Market, Free Trade, Land, Property Rights, Socialism, The State
The Latest Defamation of Jefferson, 31 Mar 2006
Criticizes a conference titled "Mr. Jefferson Goes to the Middle East" and implying that George W. Bush is somehow Jeffersonian, by contrasting Jefferson and Lincoln's (and by extension Bush's) policies and actions

Perhaps the biggest lie of all that has been perpetrated by the Straussian/neocon court historians is that Abraham Lincoln was a Jeffersonian. In fact, Lincoln's law partner William Herndon once said that Lincoln "hated Jefferson" as a man and as a president. Lincoln was the anti-Jefferson. ... It was he who made a "god" of democracy ... It was the Party of Lincoln, not Jefferson, that put America on the road to imperialism with the Spanish-American war. And it is the Party of Lincoln, not Jefferson, that is currently engaged in an imperialistic war of conquest in the Middle East.
Related Topics: Standing Army, George W. Bush, Foreign Entanglements, Thomas Jefferson, Abraham Lincoln
States' Rights vs. Monetary Monopoly, 9 May 2003
Recounts the story of how various states and Andrew Jackson maneuvered against the second Bank of the United States (BUS) eventually causing it not to be re-chartered

The federal government today can wage wars without the consent of our congressional representatives, overthrow foreign governments, tax nearly half of national income, abolish civil liberty in the name of 'homeland security' and 'the war on drugs,' legalize and endorse infanticide ('partial-birth abortion'), regulate nearly every aspect of our existence, and there's little or nothing we can do about it. 'Write your congressman' is the refrain of the slave to the state who doesn't even realize he's a slave (thanks to decades of government school brainwashing). But Americans were not always slaves to federal tyranny.
Related Topics: Andrew Jackson, John Marshall, Ohio, United States, Woodrow Wilson
Tax Gouging: The Real Problem, Mises Daily, 8 Jun 2006
Deplores the tax policies of state and local governments, particularly those which have taken advantage of increases in real estate property values to increase their Soprano-like "collections"

The single most important tax reform of the 1980s was the indexation of the federal income tax to inflation and the reduction of the number of federal income tax brackets from fifteen to three. Prior to that, ordinary middle class workers were pushed up into higher and higher tax brackets by simply receiving cost-of-living pay increases. The result was that a couple of years of cost-of-living increases actually reduced your standard of living ... State and local politicians are monopolistic price gougers. Every one of them should be thrown out of office this fall, just for the fun of it.
Related Topics: Government, Inflation, Maryland, Taxation

Who would you say is your biggest inspiration?
My biggest inspirations are Murray Rothbard and Ludwig von Mises. Both men were incredibly learned, educated themselves in many disciplines, not just economics, and were masters at applying the economics of human action to the big issues of their time ... They were strong willed and heroic, responding to the severe ideological discrimination of academe by producing ever more brilliant books and articles. That's why their work is still studied today ... whereas all of those academic critics/bigots are long forgotten, if anyone ever heard of them in the first place.
Related Topics: The Road to Serfdom, United States, Austrian Economics
The Real DiLorenzo: A 'Southern Partisan' Interview, 17 Jun 2004
Interview by Southern Partisan magazine, about DiLorenzo's The Real Lincoln: A New Look at Abraham Lincoln, His Agenda, and an Unnecessary War (2002)

How did you get on to Lincoln?
I was real interested in the War, and I started thinking about how I could combine my profession with this hobby of mine: the history of the War. More and more, as I read about Lincoln, I realized he was a tyrant. He was all about money and power ...
Do you expect [centralization] to ever go back ...?
Seriously, the only way it could, would be secession. If a big chunk of the United States actually seceded from the federal government and pained it a bit and deprived it of a large amount of its revenue. Otherwise, how else could it possibly happen?
Related Topics: Charles Adams, George W. Bush, United States Constitution, Democracy, Free Trade, Government, Abraham Lincoln, Republican Party, Taxation, American War Between the States

The introductory paragraph uses material from the Wikipedia article "Thomas DiLorenzo" as of 20 Jun 2018, which is released under the Creative Commons Attribution-Share-Alike License 3.0.