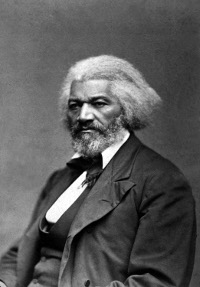 Frederick Douglass (born Frederick Augustus Washington Bailey; c. February 1818 – 20 February 1895) was an American social reformer, abolitionist, orator, writer and statesman. After escaping from slavery in Maryland, he became a national leader of the abolitionist movement in Massachusetts and New York, gaining note for his oratory and incisive antislavery writings. In his time, he was described by abolitionists as a living counter-example to slaveholders' arguments that slaves lacked the intellectual capacity to function as independent American citizens. Northerners at the time found it hard to believe that such a great orator had once been a slave.

Frederick Douglass was an abolitionist, a reformer, a statesman, and the author of the American classic Narrative of the Life of Frederick Douglass, An American Slave. ... When he found a copy of the Columbia Orator, a schoolbook incorporating several antislavery passages as reading and writing exercises, Douglass devoured the idea of abolitionism. ... In September 1838, he finally managed to sneak out of Maryland disguised as a Navy seaman with forged papers obtained through the Underground Railroad. He moved to Rochester, New York, which with some interruptions was his home for the rest of his life.
Related Topics: United States Constitution, William Lloyd Garrison, Self-Esteem

Frederick Douglass was one of the most influential and effective advocates for abolition in the United States. He suffered the evils of slavery first-hand—yet was able to maintain his courage and independence even in that oppressive environment. His autobiography, My Bondage and My Freedom, recounts the slowly-fading innocence of his youth. ... Rather than resign himself to pain and servitude, Douglass dared to strive for a life proper to the man that he was. He had to learn the meaning of freedom the hard way, and to claim it for himself: intellectually, physically, politically.
The Trouble With Thomas Jefferson: The eloquent Founder's original sin, by Damon Root, Reason, Jan 2009
Review of the book The Hemingses of Monticello: An American Family, by Annette Gordon-Reed

... consider two very different figures whose lives intersected with slavery in the 19th century: the abolitionist Frederick Douglass and the pro-slavery politician John C. Calhoun. An escaped slave and self-taught author and orator, Douglass understood better than most just how potent the Declaration's promise of inalienable rights could be. 'Would you have me argue that man is entitled to liberty? That he is the rightful owner of his own body?' Douglass would demand of his mostly white audiences. 'There is not a man beneath the canopy of heaven that does not know that slavery is wrong for him.'
Related Topic: Thomas Jefferson

Born into slavery in 1818, Frederick Douglass rose to become one of the nation's foremost intellectuals—a statesman, author, lecturer, and scholar who helped lead the fight against slavery and racial oppression. But unlike some other prominent abolitionists, Douglass embraced the U.S. Constitution, insisting that it was essentially an anti-slavery document and that its guarantees for individual rights belonged to all Americans, of all races. Further, in his most popular lecture, 'Self-Made Men,' Douglass spoke of people who rise through their own efforts and devotion rather than through circumstances of privilege.

The introductory paragraph uses material from the Wikipedia article "Frederick Douglass" as of 6 Aug 2018, which is released under the Creative Commons Attribution-Share-Alike License 3.0.