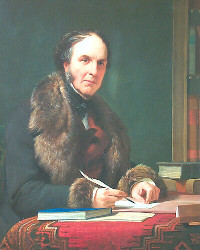 Nassau William Senior (26 September 1790 – 4 June 1864), was an English lawyer known as an economist. He was also a government adviser over several decades on economic and social policy on which he wrote extensively.

Nassau William Senior was a noted economist who also held several government commissions ... Senior defined political economy as the science that investigates the nature, production, and distribution of wealth. He employs the term wealth as a synonym for value, and, like the economists before him, includes utility as one of the three causes of value ... Senior is widely regarded as one of the forerunners of marginal utility theory. The satisfaction that we derive from a class of goods, he maintained, “diminishes in a rapidly increasing ratio” as the supply of those goods increases.
Related Topic: Economics

Nassau William Senior, 1790-1864
Part of The History of Economic Thought site; includes picture, short profile, list of his writings and other resources about Senior

A descendant of Sephardic Jewish emigrants to 17th C. London (from Portugal or Spain, via Hamburg), some of whom had gone on to live in Barbados and Jamaica, may help explain the unusual first and last name this great English economist. The first holder of the Drummond Chair at Oxford, Nassau William Senior was a detractor from orthodox Ricardianism. Nassau William Senior. along with his former tutor and friend Richard Whately, formed the core of the the 'Oxford-Dublin' tradition of proto-marginalist economics, and is an important predecessor of the Marginalist Revolution.

Senior, a leading economist of the Classical school, was in turn a barrister, the first professor of political economy at University of Oxford and an eminent adviser to successive British governments ... Senior is important in the history of economics for his development of economic theories and policy analysis. He had strong views on the methodology of the subject, pioneered the notion of abstinence as a justification for profits, presented a value theory based on utility, redesigned the Poor Laws and contributed to contemporary debates on Ireland and education.
Related Topics: Capital Goods, Economics, Free Trade, Republic of Ireland, Wages

The introductory paragraph uses material from the Wikipedia article "Nassau William Senior" as of 11 Jun 2018, which is released under the Creative Commons Attribution-Share-Alike License 3.0.