David Boaz - Hero of the Day 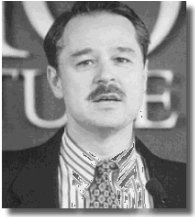 David Boaz is one of the masterminds of the modern libertarian movement.

As executive vice president of the Cato Institute, Boaz has helped erect a vast infrastructure of research and analysis that is propelling libertarian ideas and proposals into the mainstream of American political debate. The radical suggestion of George W. Bush that social security be nudged in the direction of greater freedom wasn't plucked out of thin air: for years, working with scholars like Peter Ferrara, Cato has promoted social security privatization with great energy and determination.

Boaz's interest in matters political goes back to childhood. His father "was a sort of Jeffersonian Democrat, so I learned to believe in limited government at a very early age," he told Full Context. In high school he read books like Goldwater's Conscience of a Conservative and Hazlitt's Economics in One Lesson. At Vanderbilt he started out as a political science major, until he realized "how useless academic political science was," then switched to American history.

"It seemed to me that political science textbooks spent a lot of time belaboring the obvious and then missing the point about it anyway. The classic example I remember was reading 30 pages proving what everybody knows, which is that most state legislators are lawyers. And then it concluded that it didn't make any difference, because the lawyers in legislatures were liberals and conservatives and rural and urban and so it didn't affect legislation. What I didn't realize at the time was that liberal and conservative lawyers think the law is the way to solve problems, and that's why it's relevant that most members of state legislatures are lawyers. One of the reasons we have too much legislation is we have legislatures full of people who think that legislation is the way to solve social problems."

Boaz was a veteran of Libertarian Ed Clark's presidential campaign when Ed Crane tapped him to join Cato in 1980. Over the years he has worked intimately with Crane to shape the institute's direction and make it a major player.

He suggests that many advocates of liberty tend to give short shrift to the practical policy end of promoting liberty. "There may be a sense among some Objectivists and other libertarians motivated primarily by concern for individual rights that it's a happy coincidence that pursuing a policy of individual rights leads to the results of prosperity and social harmony, but that if you had to choose, you would choose individual rights over good consequences. That's a false dichotomy. It is implicit, although perhaps not played up as much as it should have been in Rand's work, that it is not a happy coincidence—it would be unreasonable to expect that the proper philosophy for man did not lead to good results. It would make no sense to demand individual rights for a species for whom the pursuit of individual rights would result in social conflict and poverty. These two lines of argument have to work together."

In addition to all the other editorial and writing projects he's been involved with, a few years ago David Boaz made two special literary contributions to liberty: an introduction to the libertarian world view, and an anthology of the work of important libertarian or proto- or semi-libertarian thinkers, from Lao-Tzu to Ayn Rand.