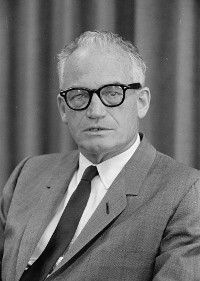 Barry Morris Goldwater (2 January 1909 – 29 May 1998) was an American politician, businessman and author who was a five-term United States Senator from Arizona (1953-65, 1969-87) and the Republican Party's nominee for President of the United States in 1964. Despite his loss of the 1964 presidential election in a landslide, Goldwater is the politician most often credited for sparking the resurgence of the American conservative political movement in the 1960s.

Barry Goldwater, senator from Arizona from 1953 to 1965 and 1969 to 1987, was the most libertarian of all the major candidates running for president in the 20th century. As the Republican nominee in 1964, he proposed a voluntary option for social security, termination of the farm subsidy program, privatizing parts of the Tennessee Valley Authority, and keeping welfare 'a private concern.' No one should have been surprised by his antigovernment crusade given what he had written in his 1960 best-selling manifesto, The Conscience of a Conservative.

The iconic Arizona senator offered 'a choice, not an echo' in his laughably doomed 1964 presidential campaign. He bridged the tradition of Western individualism with the then-barely-glimpsed future of Sunbelt anti-governmentism, inspiring later revolts such as California's Prop. 13. Though he might have used nukes in Vietnam, he more likely would have pulled out; he also helped convince Nixon to resign. A maverick to the end, he even supported gays in the military.
Related Topics: Norman Borlaug, Milton Friedman, Friedrich Hayek, Robert A. Heinlein, Jane Jacobs, Richard Nixon, Ron Paul, Ayn Rand, Julian Simon, Thomas Szasz, Rose Wilder Lane
Claiming Paine, by Katherine Mangu-Ward, Reason, Jul 2007
Review of the book Thomas Paine and the Promise of America by Harvey J. Kaye

Conservatives are, in fact, responsible for two of the most memorable recyclings of Paine in recent memory. The first was Barry Goldwater's declaration in the 1964 presidential campaign, 'Extremism in defense of liberty is no vice. Moderation in pursuit of justice is no virtue.' It is often overlooked in other studies, but Kaye picks up an echo of a comment of Paine's: 'Moderation in temper is always a virtue; but moderation in principle, is a species of vice.'
Related Topics: Entrepreneurship, Founding Fathers, Free Trade, Thomas Paine, Ronald Reagan, Society, Woodrow Wilson
David F. Nolan - The Advocates for Self-Government
Includes photo, biography and the essay "Nolan: Innovator for Liberty" by James W. Harris

Republican Barry Goldwater's 1964 presidential campaign, with its emphasis on limited government (aided by the fiery rhetoric of his libertarian speechwriter Karl Hess), was a natural draw for nascent libertarians looking to change the world. [Nolan] was one of many libertarians attracted to that campaign. He became a founding member of M.I.T. Students for Goldwater. Largely due to his efforts, the chapter rapidly grew to become the largest Youth for Goldwater chapter in New England. In recognition of this achievement Dave was appointed Vice-Chair of Massachusetts Youth for Goldwater.
Related Topics: David Nolan, Advocates for Self-Government, Libertarianism, Libertarian Party, Liberty International
The Death of Politics, by Karl Hess, Playboy, Mar 1969
Discusses libertarianism, contrasting it with both conservatism and modern liberalism, including specific policy differences

There is no operating movement in the world today that is based upon a libertarian philosophy. ... Believe it or not, there were strong possibilities of such a development in the 1964 campaign of Barry Goldwater. Underneath the scary headlines, Goldwater hammered away at such purely political structures as the draft, general taxation, censorship, nationalism, legislated conformity, political establishment of social norms, and war as an instrument of international policy.
Related Topics: Cold War, Corporatism, War on Drugs, Entrepreneurship, Libertarianism, Life, Monopoly, Politics, Ayn Rand, Freedom of Speech, Technology
Individual Rights or Civil Rights?, by Sheldon Richman, Future of Freedom, Dec 1995
Contrasts the right not to be discriminated against with the right of freedom of association and concludes that one of them is invalid, also discussing private vs. government discrimination

Governments, because they coerce citizens to pay taxes, may not discriminate irrationally. This is precisely the distinction that was not made in the 1964 Civil Rights Act. That act struck down the Jim Crow laws in the Southern states, but it also outlawed private discrimination in hiring and so-called public accommodations. Some opponents of the act, such as Senator Barry Goldwater, favored barring discrimination by state governments but opposed banning private discrimination. He predicted that the ban would turn inexorably into a mandate for quotas — which is exactly what happened.
Related Topics: Freedom of Association, Capitalism, Economic Barriers, Government, Life, Rights, Self-ownership
In Memoriam [PDF], by Jeff Riggenbach, ALF News, 2006
Biographical and memorial essay covering Joan Kennedy Taylor's varied career

She had also begun paying more attention to the world of politics. During the presidential campaign of 1964, in which she favored the Republican candidate, Senator Barry Goldwater of Arizona, she helped to found the Metropolitan Young Republican Club of New York and served as editor of the group's newsletter.
Related Topics: Roy Childs, Foundation for Economic Education, Charles Murray, Joan Kennedy Taylor
Interview with Karl Hess, by Karl Hess, A. Lin Neumann, Reason, May 1982
Topics discussed include the Republican Party, National Review, AEI, Goldwater, Rothbard, anarchism, the Vietnam War, Carter and Reagan, fascism, urban enterprise zones, the environment, and authoritarianism vs. freedom

I think its last vestiges of individualism, or libertarianism, were dropping out of it by the end of the Goldwater campaign. The Goldwater campaign was really conducted against national power. ... It was a flat-out anticommunist campaign, but there was still the antinationalist part of it. It didn't extend to the military establishment, except that Goldwater was against the draft—flat-out, no compromise, no possibility. It was Goldwater's first campaign pledge, to end the draft. End. E-N-D. No more draft.
Related Topics: American Enterprise Institute, Fascism, Liberty, Personal Responsibility, Ronald Reagan, Republican Party, Franklin D. Roosevelt, Murray Rothbard, Taxation, United States, War
Interview with Robert Poole, by Robert W. Poole, Jr., Karen Minto, William Minto, Full Context, May 1999
Topics discussed range from Poole's early influences, Ayn Rand, getting interested in policy analysis, the Goldwater campaign, the LP, Reason Foundation, the professionals who helped him the most and his passion for privatization

I was the literature director of MIT Students for Goldwater, the largest campus Goldwater group in New England, with close to 300 members. ... My Objectivist/libertarian compatriots and I were dismayed by the campaign from day one. Many of us had fought hard to make sure he got the nomination (our forces took over Mass. Young Republicans, to be sure its delegates were all for Goldwater, not Rockefeller), inspired by the strongly pro-freedom, shrink-government rhetoric of Conscience of a Conservative. But what they ended up running was a wishy-washy, feel-good campaign based on the slogan, 'In your heart you know he's right.'
Related Topics: Libertarian Party, Tibor Machan, Ayn Rand, Reason
It Usually Ends With Murray Rothbard: My Long and Winding Road to Libertarianism and Austrian Economics, by Joseph Salerno, 23 Jun 2005
Lengthy autobiographical essay recounting Prof. Salerno's progression from conservatism to anarcho-capitalism, from classical to Austrian economics, and meeting and getting to know Murray Rothbard

I ... knew little else about politics ... until Barry Goldwater began to campaign for the Republican nomination for President ... His firebrand anti-Communism greatly appealed to me at the time and after reading an article about him in Life Magazine in late 1963, I ... proclaimed myself a conservative ... My conservatism was reinforced by reading Goldwater's book Conscience of a Conservative and his biography, Barry Goldwater: Freedom Is His Flight Plan by Stephen Shadegg. ... in my American History class, the teacher organized a debate between the supporters of Goldwater and the supporters of Lyndon Johnson.
Related Topics: Cold War, Austrian Economics, Libertarianism, Murray Rothbard, Vietnam War
Karl Hess: An appreciation, by David Nolan, Libertarian Party News, Jun 1994
Memorial essay, discussing when and how Nolan met Hess and other recollections

I first met Karl Hess in 1979, 12 years after I read his book ... On first meeting Karl, I was a bit awestruck. After all, this was THE Karl Hess, author of Barry Goldwater's famous nomination acceptance speech, delivered at the 1964 GOP convention. Its most-quoted lines, of course, were the immortal words: 'Extremism in the defense of liberty is no vice ... moderation in the pursuit of justice is no virtue.' This ringing declaration had reinforced my devotion to Goldwater's candidacy 15 years earlier, and I was delighted to finally meet the man who had written the speech.
Related Topic: Karl Hess
Karl Hess and the Death of Politics, by Jeff Riggenbach, 13 May 2010
Transcript of the 6 May 2010 "Libertarian Tradition" podcast with a wealth of biographical information

... the Randian influence was showing up unmistakably in ... the speeches delivered by the party's presidential nominee for [1964], US Senator Barry Goldwater ..., for whose campaign Hess served as chief speechwriter. ... After the ... campaign, Karl ... continued to ghostwrite a nationally syndicated newspaper column for Barry Goldwater for a while, and he wrote a book about the campaign, published in 1967 under the title In a Cause That Will Triumph. He even did a little speechwriting for the senator during his 1968 campaign to regain the senate seat he had given up four years earlier in order to run for president.
Related Topics: Karl Hess, Learning, Libertarianism, Radical Libertarian Alliance, Republican Party, Murray Rothbard
Why I am a Libertarian, by Mark Richards, 21 May 2008
Describes the persons (mainly his mother) and events that influenced him in becoming a libertarian

In 1964 my mom gave me a 'Goldwater for President' button to wear to school, which I did. My fifth-grade teacher was aghast! I wore that Goldwater button despite her snide comments. The teacher was rabidly pro-Lyndon Johnson and had no problem with my 10-year-old classmates wearing Johnson buttons, I guess I was becoming a libertarian at that age.
Related Topics: Libertarianism, Libertarian Party, Vietnam War
Why I Do Not Vote, by Butler Shaffer, 14 Nov 2000
After recollecting his early involvement in the Goldwater movement, Shaffer explains why advocates of liberty and social order should refrain from political participation and voting

I later became a member of the State Central Committee, the Young Republican State Executive Committee, one of the incorporators of Barry Goldwater's first national fund-raising campaign, and a member of the Nebraska delegation to the 1964 Republican National Convention. The Goldwater movement was the precursor to the modern Libertarian Party, and was largely energized by young men and women who were convinced that state power had become destructive of individual liberty and social order, and that 'working within the system' could change all of that. My experiences in the Republican Party convinced me otherwise.
Related Topics: Politics, Voting

The introductory paragraph uses material from the Wikipedia article "Barry Goldwater" as of 7 Aug 2018, which is released under the Creative Commons Attribution-Share-Alike License 3.0.