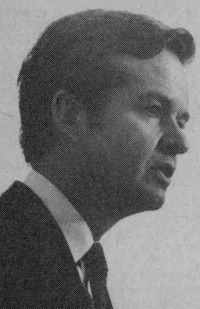 Edward E. Clark (born 4 May 1930) is an American lawyer and politician who ran for Governor of California in 1978, and for President of the United States as the nominee of the Libertarian Party in the 1980 presidential election.

Edward Emerson Clark is an attorney and the 1980 Libertarian Party presidential nominee. Ed Clark, a corporate attorney in New York and Los Angeles, opposed the Vietnam War while remaining a Republican, but when President Richard Nixon imposed wage and price controls in 1972, he joined the Libertarian Party and quickly became a member of its national committee and California State Chair. In 1978, he stood as the Libertarian candidate for governor of California, winning 377,960 votes, or about 5.5% of the total cast. That success led to his selection as the party's 1980 presidential nominee.
Related Topic: Libertarian Party

Advocates for Self-Government, Board of Advisors

In 1980, the party ran Ed Clark and businessman David Koch as its presidential and vice-presidential candidates. The team of Clark, a popular attorney who had won 5% in a race for governor of California, and Koch, whose millions helped the party to wage an unprecedented ad campaign, raked in an impressive 921,199 votes and made the ballot in all 50 states (plus DC).
Related Topics: David Bergland, Harry Browne, John Hospers, Libertarian Party, Roger MacBride, Andre Marrou, Tonie Nathan, Ron Paul
Libertarian Party: History: Presidential & Vice-Presidential Candidates
Includes campaign poster and cover of campaign book

Clark For President: A Report on the 1980 Libertarian Presidential Campaign, by Edward H. Crane III (Communications Director), Chris Hocker (National Coordinator), Dec 1980
Post-mortem analysis of the Clark campaign, focusing on what the authors consider were the ten most important aspects, and in terms of what was learned that could be useful to later campaigns

The full time schedule for Ed Clark began July 1 ... [O]nly the 106 day period between July 1 and November 4 will be examined. During this period, Ed Clark made at least one personal appearance in 36 states plus the District of Columbia. The 14 states he missed were: ... (He had made campaign appearances in [five of the 14] between his nomination and July 1.) ... The campaign discovered during the first part of September that rallies for Clark on college campuses usually worked quite well ... Crowds were usually receptive and enthusiastic, and Clark's schedule included an average of one campus appearance per day ...
Related Topics: Libertarianism, Libertarian Party, Louisiana, Oregon, Ronald Reagan, West Virginia
Libertarian Voters and the Libertarian Party, by David Boaz, 23 May 2008
Discusses the 2008 Libertarian Party presidential candidate nominees, the views of libertarian-leaning voters and the prospects for the LP

The party’s most successful presidential candidate was Ed Clark, who got 921,000 votes, about 1.1 percent, in 1980. Since then LP candidates have hovered around 400,000 votes ... In Beyond Liberal and Conservative, William S. Maddox and Stuart A. Lilie found that libertarians gave 17 percent of their votes to "other" candidates in 1980, presumably independent John B. Anderson and Libertarian Clark, though Clark and Anderson received only about 8 percent of the national total.
Related Topics: Arizona, Libertarianism, Libertarian Party, Ron Paul

The introductory paragraph uses material from the Wikipedia article "Ed Clark" as of 6 Jun 2018, which is released under the Creative Commons Attribution-Share-Alike License 3.0.