Executive vice president of the Cato Institute, author of Libertarianism: A Primer 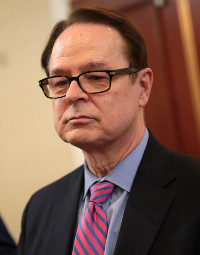 "He has principal responsibility for Cato's phenomenal output of books, policy analyses and other informative materials on every imaginable national policy. This gives him exceptional perspective about developments affecting liberty today. ... In 1987, he had two complementary books published Libertarianism: A Primer and The Libertarian Reader: Classic & Contemporary Writings from Lao-Tzu to Milton Friedman."

"... Boaz has helped erect a vast infrastructure of research and analysis that is propelling libertarian ideas and proposals into the mainstream of American political debate. ... Boaz was a veteran of Libertarian Ed Clark's presidential campaign when Ed Crane tapped him to join Cato in 1980. ... He suggests that many advocates of liberty tend to give short shrift to the practical policy end of promoting liberty."
Freeing the Education Market, by Sheldon Richman, Mar 1993
Examines the effects of compulsory public education on literacy rates and suggests market alternatives

"David Boaz, executive vice president of the Cato Institute, points out that the record of the schools is revealed in the following facts: '25 percent of U.S. college freshmen take remedial math courses, 21[%] take remedial writing courses, and 16[%] take remedial reading courses. Meanwhile, a recent survey of 200 major corporations has found that 22[%] of them teach employees reading, 41[%] teach writing, and 31[%] teach mathematical skills. The American Society for Training and Development projects that 93[%] of the nation's biggest companies will be teaching their workers basic skills within the next three years.'"
Related Topics: Children, Educational Freedom, Compulsory Education

'Anarchist' Idiocy, 14 May 2011
Discusses a Washington Post story about Greek so-called "anarchists" who were protesting the "rolling back of social safety nets"

"The Washington Post splashes a story about 'anarchists' in Greece across the front page today. ... So these 'anarchists' object that the state might cut back on its income transfers and payrolls. That is, they object to the state reducing its size, scope, and power. ... Real anarchists, of either the anarcho-capitalist or mutualist variety, might have something useful to say to Greeks in their current predicament. But disgruntled young people, lashing out at the end of an unsustainable welfare state, are not anarchists in any serious sense. They're just angry children not ready to deal with reality."
Related Topic: Anarchism
Ayn Rand at 100, 2 Feb 2005
Discusses the influence of Ayn Rand, after the publication of her two main novels, during the 1960s through the 1980s and to this day, with sales of about half a million of her books per year

"Few writers are more popular - or more controversial - than Ayn Rand. Despite the enormous commercial success of her books, and the major influence she’s had on American culture, reviewers and other intellectuals have generally been hostile. They've dismissed her support for individualism and capitalism, ridiculed her 'purple prose,' and mocked her black-and-white morality. None of which seems to have dissuaded her millions of readers. Although she did not like to acknowledge debts to other thinkers, Rand's work rests squarely within the libertarian tradition, with roots going back to Aristotle, Aquinas, Locke, Jefferson, Paine, Bastiat, Spencer, Mill, and Mises."
Related Topic: Ayn Rand
Benjamin Constant, Eloquent Defender of Freedom, 25 Oct 2017
Tribute to Constant, written on the 250th anniversary of his birth, with quotes from his speech "The Liberty of the Ancients Compared with That of the Moderns"

"Today is the 250th anniversary of the birth of Benjamin Constant, a prominent French liberal in the postrevolutionary era, whom Isaiah Berlin called 'the most eloquent of all defenders of freedom and privacy.' He is perhaps best known in our time as the author of an essay – actually a speech in 1833 – called 'The Liberty of the Ancients Compared with That of the Moderns.' He argued that the ancient concept of liberty as political participation was not suited to modern society, in which people were busy with the production of wealth."
Related Topics: Benjamin Constant, Government, Liberty
Clark, Ed (1930-), The Encyclopedia of Libertarianism, 15 Aug 2008
Biographical essay

"Edward Emerson Clark is an attorney and the 1980 Libertarian Party presidential nominee. Ed Clark, a corporate attorney in New York and Los Angeles, opposed the Vietnam War while remaining a Republican, but when President Richard Nixon imposed wage and price controls in 1972, he joined the Libertarian Party and quickly became a member of its national committee and California State Chair. In 1978, he stood as the Libertarian candidate for governor of California, winning 377,960 votes, or about 5.5% of the total cast. That success led to his selection as the party's 1980 presidential nominee."
Related Topics: Ed Clark, Libertarian Party
Harmony: Lao-tzu, The Libertarian Reader, 1997
First section of part four, "Spontaneous Order"; includes a brief introduction and short excerpts of five chapters from the Tao Te Ching

"... elements of libertarian ideas in society can certainly be found in Eastern philosophy as well. One of the classic sources is the Tao Te Ching, thought to have been written in the sixth century B.C. by a scribe named Lao-tzu (or Lao Tse). Tao is sometimes translated 'the Way,' though another possible translation is 'natural law.' ... Lao-tzu urges the ruler ('the sage') to refrain from acting, to accept the good with the bad, to let people pursue their own actions."
Related Topic: Lǎozǐ
Hospers, John (1918-2011), The Encyclopedia of Libertarianism, 15 Aug 2008
Biographical essay

"John Hospers is a philosopher and the first presidential nominee of the U.S. Libertarian Party. Hospers is best known to philosophers for his work in aesthetics, especially his book Understanding the Arts. He is the author of two widely used textbooks, Introduction to Philosophical Analysis and Human Conduct: Problems of Ethics. ... Despite the lack of electoral success, Hospers's intelligent campaign did rally libertarians to the new party and lay the groundwork for greater success in the 1976 and 1980 elections."
Related Topics: John Hospers, Libertarian Party
Libertarian Voters and the Libertarian Party, 23 May 2008
Discusses the 2008 Libertarian Party presidential candidate nominees, the views of libertarian-leaning voters and the prospects for the LP

"The Libertarian Party is meeting in Denver to nominate a presidential candidate. Vying for the nomination are a former Democratic senator, a former Republican congressman ... and a number of long-time party activists. ... 44 percent of voters said yes to Zogby's question, “Would you describe yourself as fiscally conservative and socially liberal, also known as libertarian?' So there would seem to be a huge potential audience for a Libertarian candidate who could raise money, get media attention, ... and present a compelling and articulate case for peace, freedom, and limited government."
Related Topics: Arizona, Ed Clark, Libertarianism, Libertarian Party, Ron Paul
Liberty at the Movies, 20 Jun 2005
Short reviews of "some all-time favorite libertarian movies"

"Roger Lea MacBride was an author and the 1976 U.S. Libertarian Party presidential nominee. Roger MacBride was involved in classical liberal scholarship and activism virtually his entire life. As a child, he became close to Rose Wilder Lane, the daughter of Laura Ingalls Wilder, and he absorbed her libertarian philosophy. He graduated from Harvard Law School, practiced law in Vermont, served in the legislature, ran for governor, and published two books on constitutional law, The American Electoral College and Treaties versus the Constitution."
Related Topics: Roger MacBride, Libertarian Party
Nathan, Tonie (1923-2014), The Encyclopedia of Libertarianism, 15 Aug 2008
Biographical essay

"Theodora (Tonie) Nathan was the first woman and first Jewish person to receive an electoral vote. Nathan was a radio-TV producer in Eugene, Oregon, when she attended the first presidential nominating convention of the Libertarian Party in 1972. She was selected to run for vice president with presidential candidate John Hospers. Although the ticket received only 3,671 official votes, Virginia elector Roger L. MacBride chose to vote for Hospers and Nathan, rather than Nixon and Agnew, making Nathan the first woman in American history to receive an electoral vote."
Related Topic: Tonie Nathan
Paul, Ron (1935-), The Encyclopedia of Libertarianism, 15 Aug 2008
Biographical essay

"Ron Paul is a member of Congress and was the 1988 U.S. Libertarian Party presidential nominee. For much of the period from 1976 onward, Paul, a physician from Texas, has been the only consistent libertarian in the U.S. Congress. He served briefly in 1976, from 1979 to 1985, and returned to Congress in 1996. He has always insisted that he never votes for anything that is not authorized by the U.S. Constitution, and he never votes for any bill that would increase taxes or government spending. ... In May 2007, Representative Paul announced his candidacy for the 2008 Republican nomination for president."
Related Topic: Ron Paul
RIP Andrea Rich, 1 Aug 2018
In memoriam

"I am saddened to report that my dear friend Andrea Millen Rich died this morning at her home in Philadelphia at the age of 79 after a 19-year battle with lung cancer. She was, among many other things, the proprietor of Laissez Faire Books and the wife for 41 years of Howard Rich, the Cato Institute's longest-serving Board member. For more than 40 years Andrea was at the center of the libertarian movement, a mentor, counselor, friend, supporter, facilitator, networker, and gracious hostess to hundreds of freedom lovers – young, old, well-known, obscure, successful, down-on-their-luck, didn’t matter."
Related Topics: Center for Independent Thought, Laissez Faire Books, Andrea Rich
The Drug War Hits Home, Future of Freedom, Jan 1992
Reviews several cases of non-users caught in "the tentacles of the War on Drugs" and explains why civil forfeiture is attractive to law enforcers

"The war on drugs increasingly demonstrates the futility of efforts to prohibit people from engaging in peaceful, voluntary activities. ... We will never stop drug use by stepping up the drug war. We are already arresting far more people and spending ten times as much as we did to enforce alcohol prohibition. "
Related Topic: War on Drugs
The Legacy of Laura Ingalls Wilder, One of America’s First Libertarians, Time, 9 May 2015
Focuses on Rose Wilder Lane's life and relates the influence of her mother, Laura Ingalls Wilder, as well as Wilder Lane's influence on Roger MacBride

"Laura's only child was Rose Wilder Lane. Lane was born in DeSmet, South Dakota, and grew up on her parents' Rocky Ridge Farm in Missouri. ... Lane wrote two novels of her own about her family's homestead ... But her interests turned more to politics, and she became a vociferous adversary of President Franklin Roosevelt and the New Deal, which she saw as 'creeping socialism.' In the dark year of 1943, during World War II, Lane and two other remarkable women published books that could be said to have given birth to the modern Libertarian movement. Lane published a passionate historical book called The Discovery of Freedom."
Related Topics: John Chamberlain, Roger MacBride, Rose Wilder Lane
Time to Rethink the War on Drugs, Future of Freedom, Oct 1999
Lists several effects of drug prohibition and suggests using some common sense regarding drug legalization

The introductory paragraph uses material from the Wikipedia article "David Boaz" as of 06 Jun 2018, which is released under the Creative Commons Attribution-Share-Alike License 3.0.