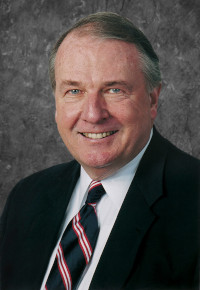 Edward Harrison Crane (born 15 August 1944) is an American libertarian and co-founder of the Cato Institute. He served as its president until 1 October 2012.

Ed Crane is the founder and president emeritus of the Cato Institute. Under his leadership, the Cato Institute grew to become one of the nation's most prominent public policy research organizations. He stepped down as President and CEO in October 2012. Crane has been a pioneer in framing the political debate as one, not between liberal and conservative, but rather between civil society (the voluntary sector) and political society (government power). He was at the forefront of promoting personal accounts in lieu of the current Social Security system, and was one of the first national leaders of the term limits movement.

Murray, the LP, and Me, by David Bergland, 25 Dec 2002
Lengthy autobiographical essay, focusing on Rothbard, libertarianism and the LP; reprinted in Walter Block's I Chose Liberty (2010)

Up until that time [1977], Ed Crane had been the National Chair and an extremely effective autocratic ruler. It really was his show and he ran it well. Crane had a substantial advantage in that he was tight with Charles Koch and other members of the ultra-wealthy Koch family who were major funders for the LP and other libertarian causes ... [I]n 1977, The Cato Institute was founded with Koch money and with Crane as its President ... Murray Rothbard and Bill Evers joined Cato ... But Murray and Crane fell out and Murray was kicked out. Thereafter Murray referred to the Cato libertarians as "Craniacs."
Related Topics: Barbara Branden, Nathaniel Branden, Cato Institute, For a New Liberty, Human Action, Libertarianism, Libertarian Party, Roger MacBride, Objectivism, Earl Ravenal, Murray N. Rothbard
Power Profile: Ed Crane, by Patty Reinert, Examiner.com, 30 Jan 2008
Biographical profile of Ed Crane, including his views on the 2008 U.S. presidential candidates and his five tips for success

Ed Crane doesn't really like politicians, nor, for that matter, people who do. So it's not surprising that the president of the libertarian Cato Institute is brimming with caustic opinions about the presidential race ... That's the thing about Ed Crane: He knows what he believes, and he'll tell you what he thinks. For the past three decades, Democrats and Republicans have listened ever more closely as he has built Cato from a three-person storefront operation into a 100-employee public policy powerhouse ... Crane left it all to become chairman of the Libertarian Party with the goal of making it a national force.
Related Topics: Cato Institute, Libertarian Party

Clark For President: A Report on the 1980 Libertarian Presidential Campaign, by Edward H. Crane III (Communications Director), Chris Hocker (National Coordinator), Dec 1980
Post-mortem analysis of the Clark campaign, focusing on what the authors consider were the ten most important aspects, and in terms of what was learned that could be useful to later campaigns

We are pleased to present this report on the Libertarian presidential campaign of Ed Clark. As the two individuals primarily responsible for the day-to-day management and direction of the 1980 campaign, we hold no illusions that this report represents anyone else's point of view other than our own ... [W]e're satisfied that any disappointments of the Clark campaign are only relative to the expectations of ourselves or others ... and that the accomplishments of the Clark for President campaign represented real progress on the way to building a national political movement, a third major political party, and a freer society.
Related Topics: Ed Clark, Libertarianism, Libertarian Party, Louisiana, Oregon, Ronald Reagan, West Virginia
The Death of Politics?, Cato Policy Report, Nov 1994
Explores trends in politics in the U.S. and other countries, particularly those that show voters are unwilling to support the political status quo

Voters in nations around the globe are turning out long-established parties in favor of political forces offering more open societies with less burdensome governments. ... In the United States intense disenchantment with government manifested itself in the 20 million votes that Ross Perot garnered in 1992. ... The term limitation movement is a powerful result of the pent-up voter energy that the FECA has created. It is, in effect, circumventing the traditional paths to political change, and the change it promises to bring about is going to be much more than cosmetic.
Related Topics: Karl Hess, Politics

The introductory paragraph uses material from the Wikipedia article "Ed Crane (political activist)" as of 1 Jun 2018, which is released under the Creative Commons Attribution-Share-Alike License 3.0.