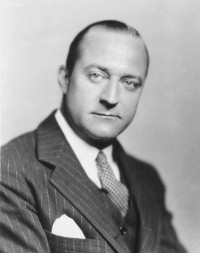 Henry Stuart Hazlitt (28 November 1894 – 9 July 1993) was an American journalist who wrote about business and economics for such publications as The Wall Street Journal, The Nation, The American Mercury, Newsweek and The New York Times. He is widely cited in both libertarian and conservative circles.

"Henry Hazlitt, a journalist, writer, and economist, was born in Philadelphia. ... Having missed out on college, Hazlitt determined to study on his own. ... Hazlitt's real economic education began with his study of Philip H. Wicksteed's The Common Sense of Political Economy, which introduced him to the subjective theory of value, only recently developed by Austrian economists Carl Menger and Eugen von Böhm-Bawerk. Hazlitt continued his self-study program and persisted in his ambition to write. His first book, Thinking as a Science, appeared in 1916 before his 22nd birthday."
Related Topics: Economics, Ethics, Ludwig von Mises

A Biography of Henry Hazlitt, by Lew Rockwell, 1 Aug 2007
Biographical and bibliographical essay

"Mr. Hazlitt--journalist, literary critic, economist, philosopher--was one of the most brilliant public intellectuals of our century. ... In his final years, he often expressed surprise that Economics in One Lesson had become his most enduring contribution. He wrote it to expose the popular fallacies of its day. He did not know that those fallacies would be government policy for the duration of the century. ... Hazlitt was not trained as an economist, although few scholars are as familiar with the relevant literature."
Related Topics: Economics, Free Market, H. L. Mencken, Ludwig von Mises
Laissez Faire Books

"Journalist Henry Hazlitt (1894-1993) had a great gift for making economic liberty understandable to ordinary people. He also played an important role in the modern libertarian movement. He helped transmit the ideas of Ludwig von Mises and F.A. Hayek to American readers. ... As a Newsweek columnist from 1946 to 1966, Hazlitt became America's best-known champion of libertarian views. Altogether, he produced 18 books and some 10,000 editorials, articles and columns. In November 1992, Laissez Faire Books published his last article, 'How I wrote Economics in One Lesson.'"

"He worked for The Wall Street Journal and the New York Post, then wrote editorials on economics for The New York Times. His front page New York Times book review write-up on F.A. Hayek's The Road to Serfdom (1944) helped propel it onto the bestseller list. He helped Mises, a newly-arrived immigrant, get published in The New York Times, and he helped find a publisher for Mises' books Omnipotent Government (1944), Bureaucracy (1944) and Human Action (1949). Hazlitt's first major book, Economics in One Lesson (1946), became a bestseller."

"My book Defending is modeled in Hazlitt's Economics in One Lesson. You might almost say that Defending might have been called Libertarianism in One Lesson. Each book starts with a lesson (in my book: the libertarian non aggression axiom; in Hazlitt, the seen and the unseen) and give a few dozen examples. As a man, Hazlitt was a friend. My son, aged 10, wrote him a thank you letter after he finished reading the book, and Hazlitt was kind enough to reply."
Related Topics: Friedrich Hayek, Libertarian Party, Ayn Rand, Murray Rothbard
Frederic Bastiat, Ingenious Champion for Liberty and Peace, by Jim Powell, The Freeman, Jun 1997
Lengthy biographical essay, covering those who influenced Bastiat as well as those influenced by him, his writings (including correspondence with his friend Félix Coudroy), his roles in the French Constituent and Legistative Assemblies and his legacy

"Meanwhile, New York Times editorial writer Henry Hazlitt produced a book with the audacious title Economics in One Lesson (1946). 'My greatest debt,' Hazlitt acknowledged, 'is Frederic Bastiat's essay, "What Is Seen and What Is Not Seen," now nearly a century old. The present work may, in fact, be regarded as a modernization, extension and generalization of the approach found in Bastiat's pamphlet.' Economics in One Lesson has sold an estimated one million copies."
Related Topics: Frédéric Bastiat, Richard Cobden, Foundation for Economic Education, Benjamin Franklin, Free Trade, Government, Law, The Law, Libertarianism, Liberty, Gustave de Molinari, Rights, Jean-Baptiste Say, Socialism, The State
Henry Hazlitt: An Appreciation, by Roy Childs, Richard Ebeling, Nov 1985
Tribute to Hazlitt on his 91st birthday, reviews his career and works

"His classic work, Economics in One Lesson (1946) has influenced three generations of both economists and the general public. ... At the age of twenty he began work at The Wall Street Journal --as a stenographer, then as a proofreader, then, finally, as a reporter. Over the years, he worked as an editorial writer for various newspapers, including the New York Sun and the New York Times. He held the post of literary editor for The Nation. And he was H.L. Mencken's appointed successor to edit The American Mercury, which had become a major force in American life."
Related Topics: Friedrich Hayek, Ludwig von Mises, The State
Henry Hazlitt - Hero of the Day, by Roy Childs, The Daily Objectivist, 2000
Memorial essay

"Henry Hazlitt died on July 8, 1993, just sixteen months short of his one hundredth birthday. ... By any standard, he lived one hell of a life. ... From the 1930s on, he was a centerpiece in the burgeoning revival of classical liberal and free market thought, and was active in every way imaginable. He helped to bring together the group of activists, intellectuals and scholars who helped form the base of the Foundation for Economic Education in 1946, and the Mont Pelerin Society two years later. He was friendly with every major figure in the birth of the modern libertarian movement, from Ayn Rand to Leonard Read."
H. L. Mencken, America's Wittiest Defender of Liberty, by Jim Powell, The Freeman, Sep 1995
Biographical essay, highlighting Mencken's tenure at the Baltimore Sun, the books he authored, the founding and his work at the American Mercury monthly and his brief relationship with Sara Haardt

"I had met Hazlitt before, when I had a chance to praise him for his Economics in One Lesson. We exchanged letters and phone calls occasionally around the time that he moved from Washington Square to Connecticut. Ayn had chastised him for not reviewing her Objectivist Ethics in his book on the welfare state. He responded that he didn't understand her views enough to comment publicly on them. She was less than pleased ... But I think their views were ultimately irreconcilable: Hazlitt was very much a utilitarian, and favored a laissez faire society simply because it had more total utility than any alternative."
Related Topics: Libertarian Party, Ludwig von Mises, Ayn Rand, Murray Rothbard
Ludwig von Mises, socialism's greatest enemy, by Jim Powell
Lengthy biographical essay on Mises, including details on Menger and Böhm-Bawerk

"Within a month after he arrived in America, Mises gave New York Times financial editor Henry Hazlitt a call. Hazlitt had first encountered Mises' name when he was reading The Value of Money (1917) by Benjamin Anderson. ... Hazlitt had reviewed the new English edition of Socialism in the January 9, 1938 New York Times ... Hazlitt remarked that he thought of Mises as a distant historic figure and was as amazed to get the call from Mises as he would have been to hear from John Stuart Mill ... Hazlitt encouraged Mises to write nine articles about the European situation, and they were published in the New York Times. "
Related Topics: Austria, Eugen Böhm von Bawerk, Bureaucracy, Central Banking, Foundation for Economic Education, Gold Standard, Carl Menger, Ludwig von Mises, Money, Mont Pelerin Society, Ayn Rand, Socialism, War
Mises's Bibliographer: An Interview with Bettina Bien Greaves, by Bettina Bien Greaves, Austrian Economics Newsletter, 1998
Topics discussed include: Ludwig von Mises, the Mises bibliography project, language knowledge, Leonard Read, Henry Hazlitt, Human Action, the business cycle and her husband's Pearl Harbor book

"Hazlitt helped considerably with [Bureaucracy and Omnipotent Government], editing and getting them published by Yale University Press. Then Hazlitt encouraged Yale to ask Mises to redo in English his German-language Nationalökonomie. When Human Action was in manuscript form he went over it and marked it up, trying to smooth out the English. Later when reading over the published edition, Hazlitt occasionally came across some awkwardly phrased passages. Whether Mises rejected Hazlitt's suggestions, I just don't know. In general, Mises's English was very good, but it was formal, not colloquial English."
Related Topics: Federal Reserve System, Government, Percy L. Greaves Jr., Human Action, Ludwig von Mises, Leonard Read, Franklin D. Roosevelt
Reading the Literature of Liberty, by Roy Childs, May 1987
Childs' selection of "great books", including works by Hazlitt, Bastiat, Rose Wilder Lane, Nock, Ayn Rand, Friedman, Hayek, Rothbard, Mises and Nozick

"I always begin with Economics in One Lesson by Henry Hazlitt. ... Hazlitt gives example after example. You want to 'cure unemployment,' Hazlitt says, or protect American jobs from foreign competition. You favor some government program to do just that. The problem is, you are only looking at the program's obvious results; you aren't looking at its unintended consequences. Yet you must, in order to see the whole picture. In twenty-six chapters, Hazlitt will lead you through illustration after illustration of this basic principle, and show how those favored government programs do more harm than good."
Related Topics: Frédéric Bastiat, Milton Friedman, Friedrich Hayek, Libertarianism, Man, Economy, and State, Ludwig von Mises, Albert Jay Nock, Ayn Rand, Murray Rothbard
The Impoverishing Effects of Foreign Aid [PDF], by Manuel Ayau, Cato Journal, 1984
Analyzes the 1980s debt crisis, from the viewpoint of creditor and debtor countries, suggesting some solutions such as removing trade barriers, ending debtor government interventionist policies and creditor government foreign aid and subsidized bail-outs

"In his book, Will Dollars Save the World? (1947, p. 29), Henry Hazlitt recalled the doubts that John Maynard Keynes raised about U.S. lending to Europe in 1919: '... If I had the influence at the United States Treasury, I would not lend a penny to a single one of the present Governments of Europe.' 'These are not the words of some American "isolationist" in 1947,' said Hazlitt, 'They are words of the most influential British economist of the last generation.' Hazlitt (p. 30) went on to argue that they applied with equal force to the conditions in 1947."
Related Topics: Brazil, Capitalism, Economics, The State

The Early History of FEE, The Freeman, Mar 1984
Excerpted from Hazlitt's remarks at the Leonard E. Read Memorial Conference on Freedom, November 1983

"In 1946 Leonard [Read] had raised the money, set up the Foundation for Economic Edu­cation here at Irvington, [New York] and invited me to become one of his original trustees and officers. ... Another effect of Leonard’s initiative soon followed. Other libertarian foundations were set up in emulation. ... FEE opened its doors on March 16, 1946. Most of the spring and summer was spent in the library, as reno­vation continued on the main building."
Related Topics: Foundation for Economic Education, Manuel Ayau, The Freeman, Milton Friedman, F. A. Harper, Friedrich Hayek, Ludwig von Mises, Mont Pelerin Society, Leonard Read
The Sphere of Government: Nineteenth Century Theories: 1. John Stuart Mill, The Freeman, Jan 1980
Critiques Mill's ideas on what are the "necessary" and "optional" functions of government

"... we might get some help in dealing with the central problems of government power by examining the answers offered over the years by the great political thinkers. But I suggested it might be more interesting to ... begin with the latest answers first. We ... began with the recent book by Robert Nozick, Anarchy, State, and Utopia. I should like now to turn to some of the answers offered in the nineteenth century. ... I shall confine myself to the answers offered by ... four outstanding writers who ... offer representative approaches—John Stuart Mill, Herbert Spencer, Thomas Huxley, and Auberon Herbert."
Related Topics: Compulsory Education, Limited Government, John Stuart Mill, The State

The introductory paragraph uses material from the Wikipedia article "Henry Hazlitt" as of 29 Jun 2018, which is released under the Creative Commons Attribution-Share-Alike License 3.0.