James Madison - Hero of the Day 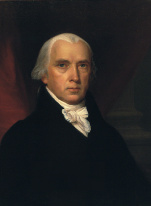 James Madison, a sickly, short, awkward man who always wore black, is not the sort of man one would expect to be an American hero. But this "Father of the Constitution," the first elder statesman in America, was a champion of individualism and limited government until the end of his long life.

Born in 1751 in Orange, Virginia, Madison was the youngest of ten children. He went to college at Princeton, and although he graduated two years later, he stayed on as an assistant to the college president, studying law, history, and politics. A hypochondriac all his life, Madison was sure he would die young, and saw no reason to set out on a career. In fact, Madison would be one of the longest-lived Presidents in history.

During the Revolution, Madison served on Orange's Committee of Safety. Soon the young man gained the respect of his elders, and in 1776 he was sent to the Virginia constitutional convention, where he helped George Mason draft the Virginia Declaration of Rights. When Thomas Jefferson returned from Philadelphia to become governor of Virginia, he and Madison began a lifelong friendship. Madison admired Jefferson's flashing brilliance, and Jefferson respected Madison's more realistic and disciplined thought.

Madison headed the movement to revise the Articles of Confederation. Before the 1787 convention began, he locked himself away with a library of books on political theory and history in order to be fully prepared for his task. At the convention he became not only the most active member but also its most thorough secretary, recording every speech given by every delegate.

Along with Alexander Hamilton and John Jay, Madison wrote a series of newspaper editorials, later published as The Federalist Papers, urging Americans to accept the new system. He debated Patrick Henry—the most powerful speaker of the day—at the Virginia ratification convention, and managed to convince the convention to ratify.

Elected to the new House of Representatives, Madison drafted the Bill of Rights, wrote speeches for George Washington, and worked with Jefferson to oppose the Federalists' big-government programs. During the Adams administration, he helped Jefferson oppose the Sedition Act by writing the Virginia Resolutions. When Jefferson was elected, he became Secretary of State.

In 1809 Madison was elected to the presidency, but he didn't like the job. Madison never lived down the humiliation of being chased out of Washington by invading British troops during the War of 1812. He was glad to retire to his plantation, Montpelier, and to work on Jefferson's new University of Virginia.

Yet still his labors were not done. In 1829, at the age of 78, he attended Virginia's second constitutional convention. And when, during the 1830s, southern public opinion began to shift from the consensus built during the Revolution, Madison stood up for the cause of liberty. Slavery had always been considered an evil to be gradually eradicated, but now Southerners like John C. Calhoun began to argue that slavery was a "positive good," and that the Declaration of Independence was, as one congressman put it, "a self-evident lie." These new leaders argued that the Constitution was not what Madison always said it was: a binding government. Instead, they claimed it was a treaty between the states, which the states could nullify at will.

Now in his 80s, Madison entered the debate against the nullifiers. Behind them, he saw the specter of Civil War. And in one of his final writings, a memorandum of "advice to my country," he urged Americans to preserve the union at all costs—and to regard Calhoun, nullifiers, and secessionists as the serpent in the Garden of Eden.

Madison died at the age of 85, in 1836. Although largely restored, Montpelier today stands empty, with but a single chair to commemorate the great man who spent his life in the service of freedom.