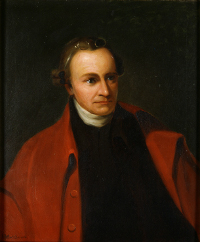 Full Biography | Redhill.org | Patrick Henry Memorial Foundation
Divided into five sections: Early Life and Times, The Voice of the Revolution, Henry and Independence, Building a Nation and The Later Years

Patrick Henry—Founding Father, patriot, orator, governor. Also husband, father, grandfather, and friend. Who was the man who walked the rolling lawns of Red Hill? He is best remembered for his speech given at St. John's Church in 1775, in which he cried 'give me liberty or give me death!' to the charged crowd, urging them to Revolution. But he is also the man who fought for and won the Bill of Rights, which preserved individual liberties in the fledgling nation, and still does today. He was a five-term governor of Virginia, as well as its first.
Patrick Henry: The Colonial Williamsburg Official History & Citizenship Site
Includes portrait, timeline, biography, and audio of "Give me liberty" speech read by Richard Schumann

Patrick Henry was born in Hanover County, Virginia in 1736, to John and Sarah Winston Henry. A symbol of America's struggle for liberty and self-government, Patrick Henry was a lawyer, patriot, orator, and willing participant in virtually every aspect of the founding of America. ... He played a prominent role in the fifth Virginia convention, which convened on May 6, 1776, and on June 29 was elected the first governor of the Commonwealth under its new constitution, adopted the same day. Patrick Henry served five terms as the first and sixth governor of Virginia. He died in 1799 at his home on Red Hill Plantation in Campbell County.

Autobiography, by Thomas Jefferson, 29 Jul 1821
Covering the period from 1743 (his childhood, with background on his parents) to 1790 (shortly after his return from Paris and before assuming his office as U.S. Secretary of State); written during 6 Jan-29 July 1821

When the famous Resolutions of 1765, against the Stamp-act, were proposed ... I attended the debate ... at the door of the lobby of the H. of Burgesses, & heard the splendid display of Mr. Henry's talents as a popular orator. They were great indeed; such as I have never heard from any other man. He appeared to me to speak as Homer wrote ... I sent ... two copies of my draught, the one under cover to Peyton Randolph ... the other to Patrick Henry. Whether Mr. Henry disapproved the ground taken, or was too lazy to read it (for he was the laziest man in reading I ever knew) I never learned: but he communicated it to nobody.
Related Topics: John Adams, United States Declaration of Independence, Benjamin Franklin, James Madison, George Mason, United States Presidents
The Bill of Rights: Antipathy to Militarism, by Jacob Hornberger, Future of Freedom, Sep 2004
After quoting the text of the Third Amendment, discusses standing armies in the historical context and in modern times

Virginian Patrick Henry pointed out the difficulty associated with violent resistance to tyranny when a standing army is enforcing the orders of the government: "A standing army we shall have, also, to execute the execrable commands of tyranny; and how are you to punish them? Will you order them to be punished? Who shall obey these orders? Will your mace-bearer be a match for a disciplined regiment?" When the Commonwealth of Virginia ratified the Constitution in 1788, its concern ... mirrored that of Patrick Henry: "... that ... in all cases the military should be under strict subordination to and governed by the civil power."
Related Topics: Standing Army, United States Bill of Rights, United States Constitution, Government, James Madison, Military Industrial Complex, No Quartering of Soldiers
The Constitution Within, by Sheldon Richman, The Goal Is Freedom, 18 Aug 2006
Questions the validity of constitutions by relating how James Madison behaved during the debates over the U.S. document and later after his introduction in the first Congress of the amendments that would become the Bill of Rights

As Labunski reports, Madison's bid to be one of the senators from Virginia (state legislatures elected senators in those days) was opposed by the leading Anti-federalist Patrick Henry, who had headed the effort for amendments at the ratifying convention. "[N]o person who wishes the constitution to be amended should vote for Mr[.] Madison to be in the senate," Henry said. When a Madison backer claimed that Madison would oppose elimination of the national taxing power, Henry pounced, "There gentlemen, the secret is out: it is doubted whether Mr. Madison will obey instructions."
Related Topics: United States Bill of Rights, United States Constitution, James Madison, Reserved Powers, Rights, Virginia, Voting
Empire or Liberty: The Antifederalists and Foreign Policy, 1787-1788 [PDF], by Jonathan Marshall, The Journal of Libertarian Studies, 1980
Describes the arguments regarding foreign policy made during the period of ratification of the United States Constitution by the Federalists and the counterarguments, "largely ignored" by historians, from the Antifederalists

As far as Patrick Henry could see, 'everything has been calm and tranquil.' ... Patrick Henry went further: The Spanish monarch, he claimed, trembled for the fate of his New World colonies with 'every advance the people make to the westward;' while his 'feeble colonies' stood exposed to our power, he could not afford to risk a contest with America. ... 'You are not to inquire how your trade may be increased, nor how you are to become a great and powerful people,' Patrick Henry rang out, 'but how your liberties can be secured; for liberty ought to be the direct end of your government.'
Related Topics: American War Between the States, Standing Army, Foreign Entanglements, Benjamin Franklin, Greece, Imperialism, John Jay, James Madison, George Mason, Massachusetts, Taxation, United States, War
How Empires Bamboozle the Bourgeoisie, by Lew Rockwell, Mises Daily, 28 Oct 2006
Speech at the Mises Institute Supporter's Summit; comments on two issues related to the U.S. population reaching 300 million: what kind of economy is needed to support that population and do all these people need to live under the same central government

Patrick Henry, as usual, was more eloquent than anyone:

... When the American spirit was in its youth, the language of America was different: liberty, sir, was then the primary object. ... But now, sir, the American spirit, assisted by the ropes and chains of consolidation, is about to convert this country into a powerful and mighty empire. If you make the citizens of this country agree to become the subjects of one great, consolidated empire of America, your government will not have sufficient energy to keep them together. Such a government is incompatible with the genius of republicanism ...

The episode in his life that apparently warrants mention by mainstream historians is his speech to the House of Burgesses—which was meeting illegally without the consent of the Crown's governor. It was late March 1775 ... and Henry knew that a clash of arms was near. In an effort to win support for a bill that would raise an army for Virginia and illegally appoint officers without the consent of the Crown, Henry clamored for the Virginia militia to take arms against the British:

The war is actually begun! ... I know not what course others may take; but as for me, give me liberty or give me death!

Patrick Henry ... entered business at 15, failing both as a shopkeeper and as a farmer. But when he took up law he discovered his true calling—orator. He was successful before rural Virginia juries. In a famous case known as Parson's Cause he declared that by vetoing the acts of the colonial legislature King George III was acting as a tyrant, and had thereby forfeited allegiance. ... In 1774, Henry was Virginia's delegate to the First Continental Congress. Upon his return to Virginia he was eloquent in his belief, still in the minority, that the colonies must take up arms against Great Britain.
Patrick Henry's Choice, by Ben Moreell, Essays on Liberty, 1954

It is important to note that Patrick Henry did not say that he wanted a law to force everyone else to do as he wished. Nor was he trying to stampede a mob into following him. When he said, 'I know not what course others may take,' he was stating the very essence of liberty; for he was respecting the right of each person to be free to follow the dictates of his own conscience.
Sic Semper Tyrannis, by Lew Rockwell, The American Conservative, 23 Apr 2007
Analyzes how the U.S. Presidency has been transmogrified from the role proposed by the Federalists

To return to my original question: what if the authors of the Federalist Papers were liars? This is not as crazy a theory as it might sound. Patrick Henry believed that they were, which is why he opposed the Constitution to begin with. It was too much of a risk, he said, to create any sort of president: 'If your American chief be a man of ambition and abilities, how easy is it for him to render himself absolute!' Patrick Henry lost the debate because enough people believed that Hamilton was sincere in his promises and that the president would be restrained.
Related Topics: George W. Bush, Conservatism, United States Constitution, Founding Fathers, United States Presidents
The Troops Don't Defend Our Freedoms, by Jacob Hornberger, 21 Oct 2005
Examines whether foreign invasion, terrorists taking over the government and the federal government, through the President and its orders to a "loyal and obedient" standing army, are plausible threats to the freedom and well-being of Americans

That is in fact why many of our Founding Fathers opposed a standing, professional military force in America — they knew ... that government officials would inevitably use the troops to ensure a compliant and obedient citizenry at home ... Here's how Patrick Henry put it: "A standing army we shall have, also, to execute the execrable commands of tyranny; and how are you to punish them? Will you order them to be punished? Who shall obey these orders? Will your mace-bearer be a match for a disciplined regiment?"
Related Topics: Standing Army, George W. Bush, Eastern Europe, Iraq, Threats To Liberty, James Madison, Militarism, Military Industrial Complex, Terrorism

Give Me Liberty or Give Me Death, 23 Mar 1775
Text of the speech given at Saint John's Church in Richmond, Virginia to the Virginia House of Burgesses; first published over 40 years after the event

No man thinks more highly than I do of the patriotism, as well as abilities, of the very worthy gentlemen who have just addressed the House. But different men often see the same subject in different lights; and, therefore, I hope it will not be thought disrespectful to those gentlemen if, entertaining as I do opinions of a character very opposite to theirs, I shall speak forth my sentiments freely and without reserve. ... Is life so dear, or peace so sweet, as to be purchased at the price of chains and slavery? Forbid it, Almighty God! I know not what course others may take; but as for me, give me liberty or give me death!
Liberty or Empire?, 5 Jun 1788
Excerpt of speech to the Virginia Ratifying Convention; criticizes several clauses of the proposed Constitution and warns about the possibility of a U.S. President becoming even worse than a king

THIS, sir, is the language of democracy–that a majority of the community have a right to alter government when found to be oppressive. But how different is the genius of your new Constitution from this! How different from the sentiments of freemen that a contemptible minority can prevent the good of the majority! ... Away with your president! we shall have a king: the army will salute him monarch; your militia will leave you, and assist in making him king, and fight against you: and what have you to oppose this force? What will then become of you and your rights? Will not absolute despotism ensue?
Related Topics: Right to Keep and Bear Arms, Standing Army, United States Constitution, Government, Imperialism, Liberty, Rights

The introductory paragraph uses material from the Wikipedia article "Patrick Henry" as of 7 May 2018, which is released under the Creative Commons Attribution-Share-Alike License 3.0.