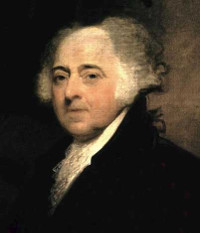 John Adams (30 October [19 October O.S.] 1735 – 4 July 1826) was an American statesman and Founding Father who served as the first Vice President (1789–1797) and second President of the United States (1797–1801). He was a lawyer, diplomat, political theorist and a leader of the movement for American independence from Great Britain. He was also a dedicated diarist and correspondent, particularly with his wife and closest advisor Abigail.

"John Adams, American statesman and political philosopher, played a leading role in the American Revolution and served as the nation's first vice president and second president. He wrote a number of important works in constitutional and political philosophy, in which he argued for a balanced, moderate form of representative democracy to safeguard liberty. Adams, a Harvard-educated lawyer from a Puritan family, wrote the Constitution of Massachusetts, sat on the committee that drafted the Declaration of Independence, and served for a decade as a diplomat in Europe, which resulted in his not being able to attend the Constitutional Convention."
Related Topic: Government

"In one of his last surviving writings, a controversial March 22, 1778, letter to English radical minister Dr. Richard Price ... Turgot criticized American state constitutions for establishing a strong executive—'an unreasonable imitation ... of the usages of England'—rather than lodge all power in a legislature. ... The letter provoked John Adams to make his case for a separation of powers, writing the three-volume Defense of the American Constitution which wasn't published until 1787, after Turgot's death. Adams, prickly pear that he was, liked Turgot and described him as 'grave, sensible, and amiable.'"
Related Topics: Bureaucracy, France, Free Trade, Gold Standard, Government, Labor, Money, François Quesnay, Freedom of Religion, Joseph Schumpeter, Adam Smith, Freedom of Speech, Taxation, Alexis de Tocqueville, Anne Robert Jacques Turgot
Avalon Project - Jefferson's Autobiography, 29 Jul 1821
Covering the period from 1743 (his childhood, with background on his parents) to 1790 (shortly after his return from Paris and before assuming his office as U.S. Secretary of State); written during 6 Jan-29 July 1821

"Mr. John Adams observed that the numbers of people were taken by this article as an index of the wealth of the state, & not as subjects of taxation, that as to this matter it was of no consequence by what name you called your people, whether by that of freemen or of slaves. That in some countries the labouring poor were called freemen, in others they were called slaves; but that the difference as to the state was imaginary only. What matters is whether a landlord employing ten labourers in his farm, gives them annually as much money as will buy them the necessaries of life, or gives them those necessaries at short hand."
Related Topics: Thomas Jefferson, United States Declaration of Independence, Benjamin Franklin, Patrick Henry, James Madison, George Mason, United States Presidents
Beginning of the end of America: Olbermann addresses the Military Commissions Act in a special comment, by Keith Olbermann, 18 Oct 2006
Transcript and video of the Countdown with Keith Olbermann show segment criticizing Bush's signing of the Military Commissions Act

"For ... we now face what our ancestors faced, at other times of exaggerated crisis and melodramatic fear-mongering: A government more dangerous to our liberty, than is the enemy it claims to protect us from. ... We have been here when President John Adams insisted that the Alien and Sedition Acts were necessary to save American lives, only to watch him use those acts to jail newspaper editors. American newspaper editors, in American jails, for things they wrote about America. ... Adams and his party were swept from office, and the Alien and Sedition Acts erased."
Related Topics: George W. Bush, Writ of Habeas Corpus, Franklin D. Roosevelt, Woodrow Wilson
Benjamin Franklin: The Man Who Invented the American Dream, by Jim Powell, The Freeman, Apr 1997
Lengthy biographical essay, including a section on the posthumous publication and reaction to Franklin's Autobiography

"Franklin was famous for his charm and tact ... but he had detractors. For instance, John Adams complained that 'I could never obtain the favour of his Company in a Morning before Breakfast which would have been the most convenient time to read over the Letters and papers. ... Mr. Franklin kept a horn book always in his Pockett in which he minuted all his invitations to dinner, and Mr. [Arthur] Lee said it was the only thing in which he was punctual ... and after that went sometimes to the Play, sometimes to the Philosophers but most commonly to visit those Ladies. ...'"
Related Topics: American Revolutionary War, United States Constitution, United States Declaration of Independence, Entrepreneurship, France, Benjamin Franklin, John Hancock, Thomas Jefferson, Massachusetts, Thomas Paine, Pennsylvania, Philadelphia, No Quartering of Soldiers, Taxation, George Washington
Bureaucracy and the Civil Service in the United States, by Murray Rothbard, The Journal of Libertarian Studies, 1995
Historical account of the evolution of the United States Civil Service and attempts to reform it, from its beginnings through the early 20th century

"The partisan appointment policy under President John Adams was much the same, but much more blatant, and devoid of the insincere protestations of non-partisanship by the first president. ... On another occasion, bitter at criticisms by William Duane's radical Jeffersonian Philadelphia Aurora, Adams had his Secretary of State pass the word of his displeasure to the US Attorney for Pennsylvania William Rawle, for not cracking down on the Aurora for seditious libel. 'If Mr. Rawle does not think this paper libelous,' thundered the President, 'he is not fit for his office; and if he does not prosecute it, he will not do his duty.'"
Related Topics: Bureaucracy, Founding Fathers, Government, Limited Government, Ulysses S. Grant, Andrew Jackson, Thomas Jefferson, Andrew Johnson, John Marshall, Richard Nixon, Parkinson's Law, Pennsylvania, Political Parties, Spoils System, Martin Van Buren, Voting, George Washington
Independence Day Propaganda, by Anthony Gregory, 4 Jul 2011
Argues that the American Revolution, albeit of a libertarian flavor, had several unsavory shortcomings

"In the first five U.S. presidencies, we see the American empire, albeit in embryonic form, begin its centuries-long crusade of aggressive expansion and centralization of power in the capital. ... John Adams blatantly violated the First Amendment as much as any president since with his notorious Alien and Sedition Acts."
Related Topics: American Revolutionary War, Thomas Jefferson, James Madison, Taxation, George Washington
John Adams, by John Fiske, The Presidents of the United States, 1789-1914, 1914
Biographical sketch; includes picture of Adams (painting by Gilbert Stuart), photograph of houses where he was born; facsimile of a letter with his signature, and a section on his wife Abigail

"John Adams, ... born in that part of the town of Braintree, Mass., which has since been set off as the town of Quincy, October 31, 1735, died there, July 4, 1826. His great-grandfather, Henry Adams, received a grant of about 40 acres of land in Braintree in 1636, and soon afterward emigrated from Devonshire, England, with his eight sons. John Adams ... was the eldest son of John Adams and Susanna Boylston ... When the stamp act was passed, in 1765, Adams took a prominent part in a town-meeting at Braintree, where he presented resolutions which were adopted word for word by more than forty towns in Massachusetts."
Related Topics: United States Declaration of Independence, John Jay, Thomas Jefferson, James Otis, Freedom of Speech, George Washington
The American Heritage of "Isolationism", by Gregory Bresiger, Future of Freedom, May 2006
Criticizes the use of the word "isolationist" by the media, "internationalists" and other foreign intervention promoters, looking at the heritage of noninterventionism as exemplified by Washington's Farewell Address

"[Washington's] successor, John Adams, despite many outrages committed by the French, would not be drawn into war. At the end of his presidency, he would say his greatest accomplishment in public service was his continuous pursuit of peace. That's even though a war declaration might have made him, for a time, a very popular leader who might not have lost the election of 1800. Adams hoped his epitaph would read, 'Here lies John Adams, who took upon himself the responsibility of peace with France in the year 1800.'"
Related Topics: Foreign Entanglements, Free Trade, Limited Government, Thomas Jefferson, Lyndon B. Johnson, Militarism, Richard Nixon, Franklin D. Roosevelt, Vietnam War, George Washington, Woodrow Wilson
The Criminality of the State, by Albert Jay Nock, American Mercury, 1939
Cautions Americans that rather than being worried or surprised by the doings of Nazi Germany, Soviet Russia, the Munich agreement and other foreign states, they should devote their energies to reining the growth of the United States government

"After 1789, John Adams said that, so far from being a democracy of a democratic republic, the political organization of the country was that of 'a monarchical republic, or, if you will, a limited monarchy'; the powers of its President were far greater than those of 'an avoyer, a consul, a podesta, a doge, a stadtholder; nay, than a king of Poland; nay, than a king of Sparta.' If all that was true in 1789—and it was true—what is to be said of the American State at the present time, after a century and a half of steady centralization and continuous increments of power?"
Related Topics: Democracy, India, Netherlands, The State, United States
The man who financed the American Revolution, by Jim Powell
Lengthy biographical essay of Robert Morris, a signer of the Declaration of Independence (and other founding documents) and financier of the Revolutionary War

"John Adams reflected on Morris, his contemporary: 'I think he has a masterly understanding, an open temper, and an honest heart; and if he does not always vote for what you and I would think proper, it is because he thinks that a large body of people remain who are not yet of his mind. He has vast designs in the mercantile way, and no doubt pursues mercantile ends, which are always gain; but he is an excellent member of our body.' ... Foreign lenders seemed tapped out. ... John Adams didn't have any luck with the Dutch government. But Adams was able to raise money from Dutch bankers."
Related Topics: American Revolutionary War, Money, Philadelphia, William Graham Sumner, George Washington
The Spirit of Humility [PDF], by Stanley Kober, Cato Journal, 1997
Discusses the recognition of the limits on human knowledge, which the author claims leads to the title spirit as evidenced in "the American experiment" and its possible lessons for European unification

"'The Revolution was effected before the war commenced,' John Adams observed. 'The Revolution was in the minds and hearts of the people; a change in their religious sentiments, their duties and obligations. This radical change in the principles, opinions, sentiments and affections of the people, was the real American Revolution.'"
Related Topics: United States Declaration of Independence, Adam Ferguson, Benjamin Franklin, Limited Government, Lebanon, Karl Popper, Freedom of Speech, Taxation, George Washington
Thomas Jefferson's Sophisticated, Radical Vision of Liberty, by Jim Powell, The Freeman, Jul 1995
Biographical essay, highlighting Jefferson's "felicity of expression" that led him to write the famous words in the Declaration of Independence

"Personally, the most heartening experience of Jefferson's last years was the reconciliation with John Adams. ... Jefferson, almost 69, told Dr. Rush that while he was wary of the suspicious and envious Adams, then 76, he recognized what Adams had done for American liberty. ... a couple of Jefferson's Virginia friends visited Adams and heard him declare: 'I always loved Jefferson and still love him.' ... Adams ended up writing the first letter on January 1, 1812, and Jefferson replied: 'I now salute you with unchanged affections and respect.' Soon correspondence was flowing between Quincy and Monticello."
Related Topics: United States Declaration of Independence, Founding Fathers, Thomas Jefferson, Property Rights

The introductory paragraph uses material from the Wikipedia article "John Adams" as of 06 Aug 2018, which is released under the Creative Commons Attribution-Share-Alike License 3.0.