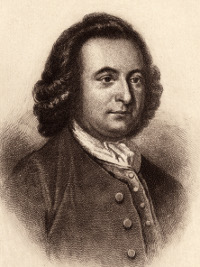 George Mason (sometimes referred to as George Mason IV; 11 December 1725 [30 November 1725 O.S.] – 7 October 1792) was a Virginia planter, politician and delegate to the U.S. Constitutional Convention of 1787, one of three delegates, together with fellow Virginian Edmund Randolph and Elbridge Gerry of Massachusetts, who refused to sign the Constitution. His writings, including substantial portions of the Fairfax Resolves of 1774, the Virginia Declaration of Rights of 1776 and his Objections to this Constitution of Government (1787) in opposition to ratification, have exercised a significant influence on American political thought and events. The Virginia Declaration of Rights, which Mason principally authored, served as a basis for the United States Bill of Rights, of which he has been deemed the father.

George Mason was a Virginia planter and statesman of the American revolutionary era. He was a firm proponent of limited government who used his influence as the holder of government offices to reduce its reach. ... as a Virginia delegate to the Constitutional Convention in Philadelphia, Mason occasionally bickered with Madison's proposals for a more robust national government. Like Jefferson, he considered the office of president under the proposed constitution too powerful and balked at the absence of a declaration of specific rights retained by states and individuals.
Related Topic: United States Bill of Rights

In 1725 George Mason was born to George and Ann Thomson Mason. The future jurist's education was profoundly shaped by the contents of his uncle [John Mercer]'s 1500-volume library, one-third of which concerned the law. ... Throughout his career Mason was guided by his belief in the rule of reason and in the centrality of the natural rights of man. He approached problems coolly, rationally, and impersonally. In recognition of his accomplishments and dedication to the principles of the Age of Reason, Mason has been called the American manifestation of the Enlightenment.

Our Mission: To utilize fully the physical and scholarly resources of Gunston Hall to stimulate continuing public exploration of democratic ideals as first presented by George Mason in the 1776 Virginia Declaration of Rights.

When the Stamp Act of 1765 aroused outrage in the colonies, George Mason wrote an open letter explaining the colonists' position to a committee of London merchants to enlist their support. ... Virginia's Declaration of Rights, framed by Mason in 1776, was widely copied in other colonies, served as a model for Jefferson in the first part of the Declaration of Independence, and was the basis for the federal Constitution's Bill of Rights. ... Throughout his career Mason was guided by his belief in the rule of reason and in the centrality of the natural rights of man.

George Mason Research Guide
Includes sections on biography, the George Mason papers, the Virginia Declaration of Rights and the Bill of Rights, the American Revolution, and Politics and the Law

This guide is designed to help researchers using the Library at Gunston Hall research George Mason IV. It is an exhaustive list of every George Mason IV resource in the library including books, articles, videos, transcripts of lectures, research files, and unpublished papers.

Autobiography, by Thomas Jefferson, 29 Jul 1821
Covering the period from 1743 (his childhood, with background on his parents) to 1790 (shortly after his return from Paris and before assuming his office as U.S. Secretary of State); written during 6 Jan-29 July 1821

I had many occasional and strenuous coadjutors in debate, and one most steadfast, able, and zealous; who was himself a host. This was George Mason, a man of the first order of wisdom among those who acted on the theatre of the revolution, of expansive mind, profound judgment, cogent in argument, learned in the lore of our former constitution, and earnest for the republican change on democratic principles. His elocution was neither flowing nor smooth, but his language was strong, his manner most impressive, and strengthened by a dash of biting cynicism when provocation made it seasonable.
Related Topics: John Adams, United States Declaration of Independence, Benjamin Franklin, Patrick Henry, James Madison, United States Presidents
Empire or Liberty: The Antifederalists and Foreign Policy, 1787-1788 [PDF], by Jonathan Marshall, The Journal of Libertarian Studies, 1980
Describes the arguments regarding foreign policy made during the period of ratification of the United States Constitution by the Federalists and the counterarguments, "largely ignored" by historians, from the Antifederalists

George Mason predicted that 'the five southern states (whose produce and circumstances are totally different from those of the eight northern and eastern states) will be ruined; for such rigid and premature regulations may be made, as will enable the merchants of the northern and eastern states not only to demand an exorbitant freight, but to monopolize the purchase of commodities, at their own price, for many years, to the great injury of the landed interest.'
Related Topics: American War Between the States, Standing Army, Foreign Entanglements, Benjamin Franklin, Greece, Patrick Henry, Imperialism, John Jay, James Madison, Massachusetts, Taxation, United States, War
FBI Free to Ambush our Bill of Rights, by Nat Hentoff, 23 May 2012
Discusses the Guidelines for Domestic FBI Operations changed and expanded by Attorney General Michael Mukasey in late 2008 and retained by the Obama administration

When I was a kid, beginning to learn what it is to be an American, I found a hero in George Mason, a leading Virginia delegate to the 1787 Constitutional Convention. Mason refused to sign on to the Constitution that was passed by the convention. Why? 'There is no Declaration of Rights,' he explained. ... George Mason's contagious objections became a major reason that the first 10 amendments, the Bill of Rights, were finally listed and ratified by enough states to be added to the Constitution in 1791. ... Thomas Jefferson said Mason was 'of the first order of greatness' ...
Related Topics: United States Bill of Rights, Communism, Right Against Unreasonable Searches and Seizures
George Mason and Individual Rights, by Willie E. Nelms, The Freeman, Sep 1977
Biographical essay highlighting Mason's ideas about individual rights and slavery, from his early childhood reading of Locke, the drafting of the Virginia Declaration of Rights to his opposition at the Virginia constitutional ratifying convention

It was during the years after his opposition to the Stamp Act that Mason established his personality as a leader. ... As Edmund Randolph, one of his contemporaries noted, 'among the members who in their small circles were propagating activity was George Mason in the shade of re­tirement.' ... Mason reached a high point in his career in 1776 when he met in Williamsburg with other Virginians to develop a new revolutionary government. It was here that he drafted the Virginia Declaration of Rights. A remarkable document, this paper expressed Mason's view of the basic rights of all men.
Related Topics: United States Bill of Rights, Rights
George Mason and the Bills of Rights, by Gary Williams, The Freeman, May 1992
Relates the life of George Mason, his primary role in writing the Virginia Declaration of Rights and his opposition to ratifying the U.S. Constitution

Mason is relatively unknown among the Founders, but his intellect was renowned as one of the finest in the colonies. ... That this plantation owner and neighbor of George Washington was not well-known outside his native Virginia was due to his reluctance to become involved in politics. Mason had a distaste for committee work and a contempt for what he called the 'babblers' who predominated in politics. ... [At] the Constitutional Convention in Philadelphia ... he was one of the five most frequent speakers, arguing passionately for individual freedoms and against centralized governmental authority.
Related Topics: United States Bill of Rights, United States Constitution, Washington, D.C., George Washington
Individual Liberty and Limited Government: Walter E. Williams and The Spirit Of George Mason [PDF], by Michael D. White, 24 May 1993
Introduction to the 1993 Frank M. Engle Lecture, "The Legitimate Role of Government in a Free Economy", delivered by Walter Williams at The American College

A little over 200 years ago, George Mason was a Virginia delegate to the Constitutional Convention held in Philadelphia. Although many Americans do not readily recall much about him, George Mason was among this country's most influential Founding Fathers. A neighbor and longtime friend of George Washington, Mason was an American patriot from his youth. An ardent believer in liberty and a republican form of government, he authored much of Virginia's constitution and wrote the State's Declaration of Rights, adopted in May 1776.
Related Topics: United States Bill of Rights, Walter E. Williams
The Revolution's Forgotten Hero, by David A. Merrick, Future of Freedom, Dec 2003
Highlights the work of George Mason as the person "most responsible for penning freedoms into written law" for his contributions to or influence on the Virginia Declaration of Rights, the U.S. Declaration of Independence and the U.S. Bill of Rights

If one were to inquire about Mason today, one would receive very little response. Most people know only that he participated in the Constitutional Convention of 1787 and that he was one of those who refused to sign the first draft of the U.S. Constitution. Very few know it was Mason who was the first to draft a written constitution that included man's inherent right to life, liberty, and the freedom to pursue and obtain happiness. ... It was not until he wrote the Virginia Declaration of Rights in May 1776 that it became apparent that he was not just another secessionist but a champion for individual liberties.
Related Topics: United States Bill of Rights, United States Constitution, Thomas Jefferson

The Virginia Declaration of Rights, 26 May 1776
This first draft was handwritten by Mason ca. 20-26 May; the page has links to images of the original document

A Declaration of Rights, made by the Representatives of the good People of Virginia, assembled in full Convention; and recommended to Posterity as the Basis and Foundation of Government. That all Men are born equally free and independant, and have certain inherent natural Rights, of which they can not by any Compact, deprive or divest their Posterity; among which are the Enjoyment of Life and Liberty, with the Means of acquiring and possessing Property, and pursueing and obtaining Happiness and Safety.
Related Topic: Virginia
The Virginia Declaration of Rights, 12 Jun 1776
This is the final version, mostly based on Mason's draft, adopted unanimously by the Virginia Convention of Delegates

That government is, or ought to be, instituted for the common benefit, protection, and security of the people, nation or community; of all the various modes and forms of government that is best, which is capable of producing the greatest degree of happiness and safety and is most effectually secured against the danger of maladministration; and that, whenever any government shall be found inadequate or contrary to these purposes, a majority of the community hath an indubitable, unalienable, and indefeasible right to reform, alter or abolish it, in such manner as shall be judged most conducive to the public weal.
Related Topic: Virginia

By the way, did you realize that George Mason ..., by Jeff Danziger, 28 Mar 2006
Related Topics: Basketball, George Mason University

The introductory paragraph uses material from the Wikipedia article "George Mason" as of 1 Aug 2018, which is released under the Creative Commons Attribution-Share-Alike License 3.0.