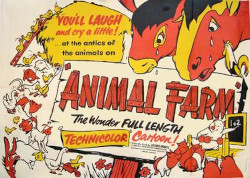 Animal Farm is a 1954 British-American animated comedy-drama film produced by Halas and Batchelor, based on the book Animal Farm by George Orwell. It was the first British animated feature (Water for Firefighting and Handling Ships, two feature length wartime training films, were produced earlier, but did not receive a formal cinema release). The United States Central Intelligence Agency (CIA) paid for the filming, part of the American cultural offensive during the Cold War, and influenced how Orwell's ideas were to be presented. The CIA initially funded Louis de Rochemont to begin work on a film version of Orwell's work and he hired Halas & Batchelor, an animation firm in London that had made propaganda films for the British government.

The introductory paragraph uses material from the Wikipedia article "Animal Farm (1954 film)" as of 3 Oct 2018, which is released under the Creative Commons Attribution-Share-Alike License 3.0.