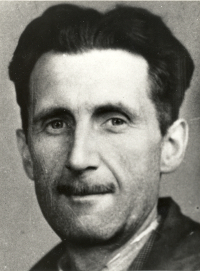 "George Orwell was a British novelist, essayist, and social analyst. His writings, especially Animal Farm and 1984, had the effect of combating socialism, yet he was a committed socialist who never explicitly questioned socialism in the years immediately before his death at a comparatively young age. From the mid-1930s on, Orwell became increasingly preoccupied with the rise of totalitarianism. Orwell saw totalitarianism as a new slave state that would abolish capitalism, would be far worse than capitalism, and would not institute anything he would choose to call socialism."
Related Topics: Myanmar, Spain, World War II

10 Things You Never Knew About Orwell's 1984, by Anna Mathews, 13 Jul 2017
Ten brief items that most people are unlikely to know about Orwell and his novel

"Before he wrote 1984, Orwell worked for the British government during World War II as a propagandist at the BBC. (Perhaps seeing the propaganda industry up close led to his critical portrait in 1984.) ... On an ironic note, Orwell himself was under government surveillance while writing his novel warning about government surveillance. The British government was watching Orwell because they believed he held socialist opinions. This surveillance started after he published The Road to Wigan Pier, a true story about poverty and the lower class in England."
Related Topics: Japan, Russia, Freedom of Speech
A Passion for Life, by Butler Shaffer, 1 Nov 2003
Discusses how political systems break the human spirit, how to live well one must live with passion, reflecting on the events of the Enlightment and the Industrial Revolution as inspiration and why personal liberty, not just economic freedom, is necessary

"To be free to make decisions regarding our own lives and property, and to be able to enter into voluntary agreements with others is ... essential to an individually meaningful life. Having a daily supply of food and water is equally essential to our lives, but hardly sufficient for living well. I shall forever recall George Orwell's description of the institutionalized 'tinny stew' fed to the humanoids in his 1984, as exemplary of the ways in which the state feeds – but does not nourish – its conscripts. How reminiscent is this of the cafeteria offerings in government schools, prisons, or military establishments?"
Related Topics: Children, Life, Politics
George Orwell - Hero of the Day, by John C. LeGere, The Daily Objectivist, 2000

"Eric Arthur Blair, known to the world as George Orwell (1903-1950), was a 'socialist' who found himself unable to long abide any actual socialist party or regime. ... Unlike most on the Left—who either embrace totalitarianism or simply evade the logic of their own position—Orwell's intellectual honesty compelled him to spend his life banging his head against his perceived moral dilemma. The products of that struggle include some powerful writing, notably his last work, 1984. ... as a critic and counter-puncher he was fearless. And as the permanent bad conscience of all decent leftists, he is irreplaceable."
Hayek, Life and Times, by Jim Powell
Lengthy biographical essay, with extensive quotes both from Hayek and others (including Keynes)

"Socialist author George Orwell: 'In the negative part of Professor Hayek's thesis [in The Road to Serfdom] there is a great deal of truth. It cannot be said too often — at any rate it is not being said nearly often enough — that collectivism is not inherently democratic, but, on the contrary, gives to a tyrannical minority such powers as the Spanish Inquisitor never dreamed of.'"
Related Topics: Capitalism, Democracy, Milton Friedman, Government, Friedrich Hayek, Frank Knight, Law, Rule of Law, Liberty, Carl Menger, Ludwig von Mises, Money, Mont Pelerin Society, Nobel Prize, Karl Popper, Socialism, Thomas Sowell, Vienna
How Big Brother Began, by Solveig Singleton, Cato Institute Commentary, 25 Nov 1997
Discusses the Health Insurance Portability and Accountability Act, the proposed 1997 Fair Health Information Practices Act and the federal databases that they require (or would have required)

"The nightmare world of constant video surveillance described by George Orwell in 1984 is one of the most compelling images of the 20th century. Big Brother is an icon of totalitarianism more familiar than real-world dictators. But policymakers who have forgotten Orwell's lessons are even now creating government databases containing information about private citizens. ... Our privacy is in danger because we have missed Orwell's point — 'Big Brother' is not the video camera in the department store. Big Brother is a huge government with unique police powers that can control every aspect of our lives."
Related Topic: Right Against Unreasonable Searches and Seizures
Imagine a Boot Stamping on Your Face, by John W. Whitehead, 7 Jul 2017
Discusses what the author considers a police state in 2017 United States and provides short reviews of 15 films that "may be the best representation of what we now face as a society"

"We have arrived, way ahead of schedule, into the dystopian future dreamed up by such science fiction writers as George Orwell, Aldous Huxley, Margaret Atwood and Philip K. Dick. Much like Orwell’s Big Brother in 1984, the government and its corporate spies now watch our every move. ... Nineteen Eighty-Four (1984). The best adaptation of Orwell's dark tale, this film visualizes the total loss of freedom in a world dominated by technology and its misuse, and the crushing inhumanity of an omniscient state. ... As George Orwell warned, 'If you want a picture of the future, imagine a boot stamping on a human face forever.'"
Related Topics: Right Against Unreasonable Searches and Seizures, Brazil, Fahrenheit 451, The Matrix, Minority Report, V for Vendetta
Non-Marxist Theories of Imperialism, by Alan Fairgate, Reason, Feb 1976
Examines writings of critics of imperialism that are not based on Marxist analysis

"Murray Rothbard, in 'Harry Elmer Barnes as Revisionist of the Cold War' (in Arthur A. Goddard (ed.), Harry Elmer Barnes, Learned Crusader ...), focused on Barnes' use of George Orwell's 1984 as a model for understanding the emergence of 'military state capitalism' in the United States. While this theme was raised in Barnes' Perpetual War for Perpetual Peace, it was most extensively developed by him in an unpublished manuscript, 'How'Nineteen Eighty-Four' Trends Threaten Peace, Freedom and Prosperity.'"
Related Topics: Latin America, Banking, John Bright, Richard Cobden, John T. Flynn, Foreign Entanglements, Garet Garrett, Imperialism, Leonard Liggio, Militarism, Murray Rothbard, Jean-Baptiste Say, Joseph Schumpeter, Adam Smith, Joseph R. Stromberg, William Graham Sumner
Orwell’s Nineteen Eighty-Four Describes the Authoritarian Left Better Than It Does Trump, by Brendan O'Neill, 20 Feb 2017
Examines the resurgence in popularity of the title work and argues that those on the left who read it seeking answers to Donald Trump's authoritarianism may instead find more reflections of their own behavior

"It's great to see that leftists and millennials and others are snapping up George Orwell's Nineteen Eighty-Four in a bid to make some sense of Trump's presidency. Because when they get deep into this dystopian tale—into the Newspeaking, sex-fearing, history-rewriting meat of it—they might realize that it describes their authoritarianism better than Trump's. I can picture their faces now: 'Guys ... is this novel about us?' ... Trump will be authoritarian, that's for sure. But his is likely to be a clumsy authoritarianism, oafish rather than Orwellian."
Related Topic: Freedom of Speech
Public Enemy Number One: The Public, by Kevin Carson, 15 Jun 2013
Considers the establishment's reaction to revelations by Edward Snowden and Bradley Manning, and the attempts to manipulate public opinion

"It's important, when listening to the official shapers of opinion in the media, to ask ourselves what they really mean by the words they use. As Orwell pointed out in "Politics and the English Language," those in power use language to obscure meaning more often than to convey it ... If you're not careful, you may find yourself responding in just the way the users intend — allowing their words to conjure up in your mind ... a whole way of life, threatened with invasion and destruction by a nameless, faceless enemy — in the words of Orwell's Two-Minute Hate, "the dark armies ... barbarians whose only honour is atrocity.""
Related Topics: Democracy, The State
Security Cameras' Slippery Slope, by Gene Healy, The Washington Examiner, 11 May 2010
Discusses the use of surveillance cameras in New York City, in London and elsewhere in the United Kingdom and in the United States, as well as drones by British police

"In his 1941 essay, England, Your England, George Orwell laid out some of the distinctive characteristics of the British national character, among them, that 'the liberty of the individual is still believed in,' and 'the most hateful of all names in the English ear is Nosey Parker.' One is struck, he wrote, by 'the privateness of English life.' Today, not so much. Driven by fears of Irish Republican Army terrorism, the British Home Office spent nearly 80 percent of its criminal justice budget in the 1990s on surveillance technology."
Related Topics: Jeremy Bentham, New York City, Right Against Unreasonable Searches and Seizures
The Brilliant but Confused Radicalism of George Orwell, by Jeff Riggenbach, 24 Jun 2010
Transcript of the Libertarian Tradition podcast of 16 Jun 2010; biographical essay examining the argument that 1984 derives in large part from Orwell's experiences at St Cyprian's, an English boarding school

"One doesn't have to read far into the works of George Orwell to discover that he had no understanding of economics whatsoever and was not personally a libertarian in the sense we have in mind when we use that word today. He was a permanently confused but authentically and radically antiauthoritarian democratic socialist. ... George Orwell presents us with yet another case of a writer who was not himself a libertarian as we understand the term today, but whose last two novels, Animal Farm and Nineteen Eighty-four, have earned him a place in the libertarian tradition."
Related Topic: Compulsory Education
The War System and Its Intellectual Myths, by Murray Rothbard, Harry Elmer Barnes: Learned Crusader, 1968
Originally titled "Harry Elmer Barnes as Revisionist of the Cold War"

"Harry Elmer Barnes ... has been greatly impressed by George Orwell's Nineteen Eighty-Four, and is unique in having penetrated to the real lesson that ... the monstrous and deadening dominion of 1984 society was being imposed upon all the world power-blocs through the excuse of perpetually cold and minor hot wars."
Related Topics: Cold War, Democracy, Foreign Entanglements, Japan, Military Industrial Complex, Right Against Unreasonable Searches and Seizures, War, World War II
Why Are We Afraid To Be Free?, by Butler Shaffer, 27 Nov 2001
Examines the question of how to bring about freedom in individuals' lives, discussing how government influences people to be in conflicted states and how one must look within oneself and act accordingly to begin to be "free"

"As George Orwell reminded us, the corruption of language is essential to the success of all political systems. If we can delude ourselves that 'war is peace,' 'freedom is slavery,' and 'love is hate,' we can ease the sense of incongruity of which our unconscious minds struggle to remind us. ... Look at how Orwell's message continues to play out in our thinking. The Air Force's 'Strategic Air Command' motto, 'peace is our profession,' is straight out of 1984, just as 'affirmative action' programs remind us of the amended principle of Animal Farm that while 'all animals are equal, some are more equal than others.'"
Related Topics: Attacks of 11 September 2001, Holidays, Liberty, Individual Liberty, Personal Responsibility, War, World War II

Workers don't seem to be voting to unionize anymore!, by Chuck Asay, 21 Aug 2008

George Orwell's 1984 in 5 mins - Animated, by Shaun McKinnon, 8 Jan 2014
Short animated video, with introduction and closing commentary, reading key passages from Orwell's 1984
John Hospers: From 1776 to 1984, by John Hospers, 12 Jul 1984
Hospers compares the American Revolution to the scenes in Orwell's Nineteen Eighty-Four, as well as the year this talk was given and Huxley's Brave New Wold; presented at the Libertarian International conference in London
Related Topic: American Revolutionary War

The introductory paragraph uses material from the Wikipedia article "George Orwell" as of 28 Jul 2018, which is released under the Creative Commons Attribution-Share-Alike License 3.0.