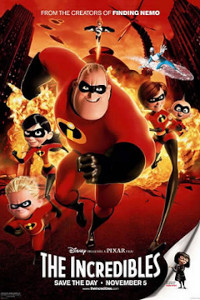 The Incredibles is a 2004 American computer-animated superhero film written and directed by Brad Bird, produced by Pixar Animation Studios, released by Walt Disney Pictures and starring the voices of Craig T. Nelson, Holly Hunter, Sarah Vowell, Spencer Fox, Jason Lee, Samuel L. Jackson and Elizabeth Peña. The film follows the Parrs, a family of superheroes who are forced to live a quiet suburban life while hiding their powers. Mr. Incredible's desire to help people draws the entire family into a confrontation with a vengeful fan-turned-foe and his killer robot.

A family of undercover superheroes, while trying to live the quiet suburban life, are forced into action to save the world.

Why has an animated cartoon caused vigorous political debate? The answer lies in the plot of The Incredibles. Bob Parr (aka Mr. Incredible) and his wife, Helen (aka Elastigirl), were once among a pantheon of superheroes who battled crime with their superpowers. Now there is no pantheon. Superheroes have been mothballed by a tort system that allows their victims to sue for wrongful rescue. Those with superabilities are viewed with suspicion by a society that maintains that "everyone is special." And, as the Parrs' elder son, Dash, observes, that means "no one is special."
Related Topics: Objectivism, Ayn Rand
Truth, Justice, and the Aristocratic Way [PDF], by A. J. Ferguson, Liberty, Feb 2005
pp. 52-53

Still, those who skipped past the political message might have had the right idea: the joy of this film is that it can be enjoyed by anyone. ... Skip the stultifying 'Polar Express' and the formulaic Christmas films, and take the kids to see 'The Incredibles.' They'll laugh so much they won't even realize they're learning a lesson.

The introductory paragraph uses material from the Wikipedia article "The Incredibles" as of 15 Oct 2018, which is released under the Creative Commons Attribution-Share-Alike License 3.0.