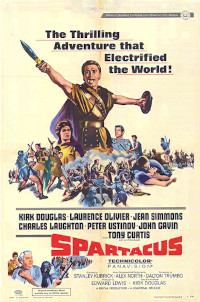 Spartacus is a 1960 American epic historical drama film directed by Stanley Kubrick, written by Dalton Trumbo and based on the novel of the same title by Howard Fast. It is inspired by the life story of Spartacus, the leader of a slave revolt in antiquity, and the events of the Third Servile War, and stars Kirk Douglas in the title role, Laurence Olivier as Roman general and politician Marcus Licinius Crassus, Peter Ustinov, who won an Academy Award for Best Supporting Actor, as slave trader Lentulus Batiatus, John Gavin as Julius Caesar, Jean Simmons as Varinia, Charles Laughton as Sempronius Gracchus and Tony Curtis as Antoninus.

Spartacus: All men lose when they die and all men die. But a slave and a free man lose different things.
Tigranes Levantus: They both lose life.
Spartacus: When a free man dies, he loses the pleasure of life. A slave loses his pain. Death is the only freedom a slave knows. That's why he's not afraid of it. That's why we'll win.

It tells the story of Spartacus, a slave trained as a gladiator who leads other slaves in a nearly successful rebellion and escape from the pre-Christian Roman Empire. ... In the end, it's clear that slavery for even a few is literally incompatible with freedom for anyone. This enjoyable (if long) antislavery film is one of the few movies to really do justice to the word spectacle.

Final scene, Varinia shows son to crucified Spartacus, 1960
I'm Spartacus, 1960
Spartacus 1960 Trailer Restored HD, 1960
Includes scenes where Spartacus breaks "the symbol of the Senate" (fasces baton) in two, and where he tells Varinia (his wife) that he prays "for a son who'll be born free"

The introductory paragraph uses material from the Wikipedia article "Spartacus (film)" as of 16 Sep 2018, which is released under the Creative Commons Attribution-Share-Alike License 3.0.