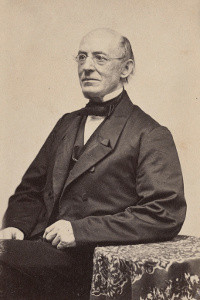 William Lloyd Garrison (10 December 1805 – 24 May 1879) was a prominent American abolitionist, journalist, suffragist and social reformer. He is best known as the editor of the abolitionist newspaper The Liberator, which he founded with Isaac Knapp in 1831 and published in Massachusetts until slavery was abolished by Constitutional amendment after the American War Between the States. He was one of the founders of the American Anti-Slavery Society, and promoted "immediate emancipation" of slaves in the United States.

William Lloyd Garrison was the most prominent of the young, radical abolitionists who burst on the American landscape in the 1830s. Garrison attacked black slavery, prevalent throughout the southern states, with unparalleled vehemence. Exasperated at the betrayal of the Revolutionary promise that all forms of human bondage would disappear in this new land of liberty ... Garrison demanded no less than the immediate emancipation of all slaves. He not only opposed any compensation to slaveholders and any colonization outside the country of freed slaves, but also demanded full political rights for all blacks, whether in the North or the South.
Related Topic: Nonviolent resistance

Benjamin Tucker, Individualism, & Liberty: Not the Daughter but the Mother of Order, by Wendy McElroy, Literature of Liberty, 1981
Bibliographical essay covering the people and radical movements that influenced Tucker in his founding and publishing of Liberty, its major themes and contributors

The roots of libertarianism in America are firmly within abolitionism, particularly within the radical faction of the anti-slavery movement ... The main organ of abolitionism was William Lloyd Garrison's The Liberator (1831–1866), which openly condemned the U.S. Constitution as "a covenant with death and an agreement with hell." Tucker's only significant reference to Garrison within Liberty, however, was a criticism of his sanctioning the Civil War. Tucker tempered his criticism, however, with the statement, "It was an ugly blot on an otherwise great career."
Related Topics: American War Between the States, Anarchism, Australia, Children, France, Henry George, Germany, Government, Auberon Herbert, Labor, Libertarianism, Liberty, Nonviolent resistance, Relationships, Freedom of Religion, Russia, Self-ownership, Spain, Herbert Spencer, Lysander Spooner, Benjamin Tucker, Josiah Warren
Douglass, Frederick (1818-1895), by Timothy Sandefur, The Encyclopedia of Libertarianism, 15 Aug 2008
Biographical essay

Shortly after moving to New York, Douglass attended a speech by William Lloyd Garrison, whose Liberator was the most notorious of abolitionist newspapers. Garrison called on Douglass to speak, and Douglass described slavery in such moving terms that Garrison asked him to join the Massachusetts Anti-Slavery Society. ... Douglass broke with Garrison in 1851, when he rejected Garrison's views that the U.S. Constitution was an inherently proslavery document ('a pact with the devil,' in Garrison's words) and that the North should secede from the South over slavery.
Related Topics: Frederick Douglass, United States Constitution, Self-Esteem
Here are 7 lesser-known classical liberal thinkers for your World Philosophy Day, by Kelly Wright, 17 Nov 2016
Brief profiles of Spencer, Tucker, Spooner, Paterson, Molinari, Garrison and Herbert, together with a reading recommendation for each one of them

William Lloyd Garrison is best known for his work calling for an end to the institution of slavery in the United States. Garrison was the editor and co-founder of the abolitionist newspaper The Liberator. He was also one of the co-founders of the American Anti-Slavery Society. Following the abolishment of slavery at the conclusion of the Civil War, Garrison went on to become a major player in the movement for women's suffrage almost a century before women would finally attain the right to vote.
Related Topics: Auberon Herbert, Gustave de Molinari, Isabel Paterson, Herbert Spencer, Lysander Spooner, Benjamin Tucker
Joan Kennedy Taylor, by Jeff Riggenbach, 14 Jan 2011
Biographical essay, including a review of Taylor's book Reclaiming the Mainstream: Individualist Feminism Rediscovered; transcript of "The Libertarian Tradition" podcasts of 28 Dec 2010 and 12 Jan 2011

two antislavery workers, Elizabeth Cady Stanton and Lucretia Mott, went to London as delegates to a World Anti-Slavery Convention. They were horrified to find that they and the other female delegates were not allowed to sit in the meeting with the male delegates, but were required to listen to the proceedings from seats in the gallery. The American abolitionist leader, William Lloyd Garrison, was so incensed by their treatment that he refused to take his seat as a delegate and sat with the women.

Spooner's first work on slavery, The Unconstitutionality of Slavery ... caused an immediate stir within the abolitionist movement and brought Spooner into prominence as a radical reformer. The leading abolitionist, William Lloyd Garrison, had long argued that the Constitution should be discarded as a pro-slavery document. Indeed, the masthead of Garrison's anti-slavery periodical, The Liberator, declared the Constitution to be a "covenant with death, an agreement with hell." ... Garrisonian abolitionists scrambled to answer them. Wendell Phillips attempted to refute Unconstitutionality ...
Related Topics: Anarchism, Banking, United States Constitution, Occupational Licensing, Money, Monopoly, Rights, Lysander Spooner, Benjamin Tucker
Module 9: Henry David Thoreau's Civil Disobedience and William Lloyd Garrison's The Liberator
Ninth module of the Cato Home Study Course, includes link to listen or download audio program (two parts, 1:015:32 and 1:07:13), questions and suggested readings

While Thoreau opposed slavery, his principal response was to resist it passively, rather than to crusade for its abolition. In contrast, William Lloyd Garrison (1805-1879) was moved to devote all of his energy and resources to a tireless crusade for abolition. In response to those who criticized him for his enthusiasm, he retorted, 'I have need to be all on fire, for there are mountains of ice around me to melt.' His 'immediatism' was realistic but uncompromising: 'We have never said that slavery would be overthrown by a single blow; that it ought to be, we shall always contend.'
Related Topic: Henry David Thoreau
The Roots of Individualist Feminism in 19th-Century America, by Wendy McElroy
Introduction to Freedom, Feminism, and the State, a collection of 22 essays edited by McElroy

Within abolitionism, women's rights stirred hot debate. The strongest advocate of women's rights was the libertarian William Lloyd Garrison (1805-1879), editor of the Liberator, who insisted that anti-slavery was a battle for human rights, not male rights ... American women who journeyed to the 1840 World Anti-Slavery Conference in London ... were barred from sitting with the assembly ... Any anger they felt toward men may have been tempered by the actions of Garrison and several other male abolitionists who chose to sit with them in protest rather than to join the body of the conference.
Related Topics: American War Between the States, United States Constitution, Kansas, Marriage, Massachusetts, Moral Repression, Republican Party, Self-ownership, Freedom of Speech, Voting, Josiah Warren
To Defeat the Assault on Liberty, Our Appeals Must Be Moral, by Jim Powell, 13 May 2013
Argues, by providing several historical examples, that "compelling moral appeals for liberty" are needed to confront various current problems such as government spending and debt, higher taxes and disregard of constitutional limits on executive power

Nobody blasted immoral slavery like William Lloyd Garrison ... Unlike many reformers who know what they're against but don't think through what they're for, Garrison had an exhilarating moral vision — natural rights. "Black children," he declared in 1829, "possess the same inherent and unalienable rights as ours." He frequently cited the Declaration of Independence. He crusaded for women's rights and peace. He defended persecuted Chinese immigrants. And he wrote: "I avow myself to be a radical free trader, even to the extent of desiring the abolition of all custom-houses throughout the world."
Related Topics: Richard Cobden, United States Declaration of Independence, Republic of Ireland, Liberty, Ronald Reagan, Slavery
Why Should a Supreme Court Justice Care about Natural Rights?, by Jim Powell, 9 Jul 2010
Discusses the evasiveness of Supreme Court nominee Elena Kagan when asked about the Declaration of Independence, and argues why justices should heed the natural rights philosophy embodied by its most famous lines

When William Lloyd Garrison energized the American abolitionist movement during the 1830s, he didn't make a legal case for emancipation, because provisions of the Constitution supported slavery. He had to make a case independent of law. He drew on the natural rights principles expressed in the Declaration of Independence to launch his great moral crusade. He frequently cited the Declaration in his speeches. 'Black children,' he insisted, 'possess the same inherent and unalienable rights as ours...'
Related Topics: United States Declaration of Independence, John Lilburne, Rights

The introductory paragraph uses material from the Wikipedia article "William Lloyd Garrison" as of 24 Jul 2018, which is released under the Creative Commons Attribution-Share-Alike License 3.0.