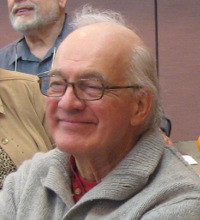 Jan Narveson, OC (born 1936) is professor of philosophy emeritus at the University of Waterloo, in Waterloo, Ontario, Canada. An anarcho-capitalist and contractarian, Narveson's form of libertarian anarchism is deeply influenced by the thought of Robert Nozick and David Gauthier.

Libertarian philosopher Jan Narveson is the author of one of the definitive books about liberty: The Libertarian Idea. The 1989 book addresses the questions 'Is libertarianism possible?' and 'Is libertarianism rational?' ... A native of Minnesota, Narveson is a professor of philosophy at the University of Waterloo, Canada, where he teaches Introduction to Social and Political Philosophy, Business and Professional Ethics, Moral Issues, History of Ethical Theory, Contemporary Ethical Theory, and seminars on moral and political subjects. He has a B.A from the University of Chicago and a PhD from Harvard University.
Related Topic: The State
Jan Narveson's Home Page
Personal pages, maintained at the site of the Kitchener - Waterloo Chamber Music Society; includes photo, biography and list of selected publications (course material no longer current)

Jan Narveson is Distinguished Professor Emeritus of the University of Waterloo in Ontario, Canada, and President of the Kitchener-Waterloo Chamber Music Society. He is also President of the Institute for Liberal Studies.

David Hume, a Scottish philosopher, was one of the most highly regarded thinkers who wrote in the English language. Although his contributions to the theory of knowledge as well as to moral and political philosophy form the basis of this high opinion, he also was the author of a highly acclaimed History of England in six volumes and many essays on various literary, moral, and political topics. ... However, Hume's insistence that private property is essential to society in fact has little to do with conservatism as such, but is, in fact, fundamentally libertarian.
Related Topic: David Hume

The introductory paragraph uses material from the Wikipedia article "Jan Narveson" as of 3 May 2018, which is released under the Creative Commons Attribution-Share-Alike License 3.0.