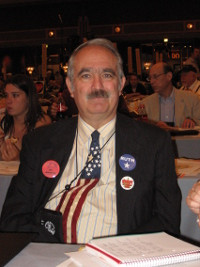 David Fraser Nolan (23 November 1943 – 21 November 2010) was an American activist and politician. He was one of the founders of the Libertarian Party of the United States, having hosted the meeting in 1971 at which the Party was founded. Nolan subsequently served the party in a number of roles including National Chair, editor of the party newsletter, chairman of the By-laws Committee, chairman of the Judicial Committee and Chairman of the Platform Committee.

Advocates for Self-Government, Board of Advisors
Libertarian Party, Founder

"David Nolan is famous among libertarians for two major achievements. He's a co-founder of the Libertarian Party — in fact, that party was formed in his own living room in 1971. In 1970, he created a new map of the political world that has all but replaced the old-fashioned left-right linear model. ... In addition, Nolan has a long history of important political activism and leadership, dating back to the early days of the modern libertarian movement. He's played countless roles as a libertarian leader and grassroots activist since the mid-1960's, and is the author of 'The Essence of Liberty.'"
Related Topics: Advocates for Self-Government, Barry Goldwater, Libertarianism, Libertarian Party, Liberty International
Full Biography for David F. Nolan
Biography provided by Nolan as candidate for United States Representative in California's District 47; including links to position papers on the drug war, armed citizens and taxing the internet

"DAVE NOLAN was the prime mover behind the formation of the Libertarian Party in 1971. He holds a degree in political science from the Massachusetts Institute of Technology, and his career has included work in publishing, advertising and marketing. ... Aside from his role in founding the LP, Mr. Nolan is best known as the originator of the 'Nolan Chart,' ... its impact on political thinking led to Mr. Nolan's being selected for inclusion in '2000 Leading Intellectuals of the 20th Century,' a reference work to be published by the International Biographical Centre ... later this year. "

Conventional unwisdom: The Life of the Party, part 19, by Thomas L. Knapp, Rational Review, 1 Jun 2004
Commentary on "machinations" at the 2004 Libertarian National Convention, particularly about the three main presidential candidates (Michael Badnarik, Gary Nolan and Aaron Russo), followed by a resignation letter from the LP

"The faction I describe is ultimately personified by David F. Nolan, the putative founder of the LP, who endorsed Gary Nolan (no relation) for the nomination. I've met David Nolan. I've served with David Nolan on the LP's Judicial Committee. I like David Nolan. I don't think that David Nolan is taking cash under the table or anything like that. But I do think that he is so focused on having a historical legacy that he is subconsciously determined to keep the LP tied down and immobile lest it leave him behind. That's sad, because I don't think Libertarians will ever cease to revere David Nolan."
Related Topics: Michael Badnarik, Libertarian Party
David Nolan: An Appreciation, by Thomas L. Knapp, 25 Nov 2010
A memorial tribute to Nolan, his chart and his involvement with the libertarian movement and the LP

"The great project of David Nolan's public life was bringing libertarians together, and bring them together he did — ultimately, in one way or another, by the millions. ... Nolan urged his party to maintain a distinctively libertarian identity and to treat elections as opportunities to educate and propagandize, not as ends in themselves. Last weekend ... the Libertarian National Committee considered a resolution affirming the party's commitment to 'the libertarian principles of self-ownership and non-aggression.' David Nolan wrote that resolution and requested its placement on the agenda."
Related Topics: Advocates for Self-Government, Libertarian Party
David Nolan: A leading 20th Century thinker?, Libertarian Party News, Aug 1999
News article about Nolan's inclusion in the book 2000 Outstanding Intellectuals of the 20th Century, his reaction and his choices of who would he include in such a list

"David Nolan ... has been named one of the '2,000 Outstanding Intellectuals of the 20th Century' by a British publishing company. In May, Nolan was notified by the Cambridgeshire, England-based International Biographical Centre (IBC) that he would be included in their upcoming reference work which features the greatest thinkers of the past 100 years. Nolan's reaction? 'Amusement, mostly. I really don't think I'm one of the 2000 leading intellectuals of this or any other century ... but then again, maybe I am,' he said — especially considering 'what idiots most intellectuals really are.'"
Related Topic: Advocates for Self-Government
Hope for the Politically Homeless, by Marshall Fritz, The Fresno Bee, 4 Sep 1988
Introduces David Nolan's Chart which Fritz turned into a Diamond Chart, and Fritz's (original) World's Smallest Political Quiz to help people place themselves within the Chart

"David Nolan felt politically homeless. His friend Jill had a nice home on the political left, where she favored free speech and other personal freedoms. And his friend Harry had a comfortable home on the right-wing, where he strongly favored free enterprise. But David agreed with both. Whenever a 'lefty' was advocating more personal liberty in expression or lifestyle, David cheered. Whenever a 'right-winger' proposed more economic freedom, he applauded. ... He realized, instead, that the map of politics denied him a home. So David 'pulled a Copernicus.' He redrew the map itself."
Related Topics: Libertarianism, Politics
The Political Compass & Why Libertarianism is Not Right-Wing, by Jan Clifford Lester, 1994
Presents a Political Compass in contrast to the traditional left/right spectrum, with a north-south axis of Choice vs. (state) Control and a west-east axis of Personal and Property Choice, and a 20 question quiz to determine one's political bearing

"... the political circle ... may be a useful first stage for illustrating the confusion in the left/right view ... One idea that makes some sense of this confusion, or conflation, is David Nolan's diagrammatical distinction between economic and personal liberty based on the empirical work of professors William Maddox and Stuart Lilie (1984). Nolan puts both types of liberty in the same diagram along two axes. But in my version I use the more neutral term 'choice', to be contrasted with (state) 'control'."
Related Topics: Marshall Fritz, Libertarianism
Total Victory: How Sweet It Is!, by Murray Rothbard, The Libertarian Forum, 1983
Lengthy account and commentary on the 1983 Libertarian Party presidential convention

"Dave Nolan (CO) was a fine choice for my replacement. Although at least as ardent a Bergland partisan as myself, he was perceived by the convention as more of a unifying factor, and he had built a new constituency among the delegates by serving as chairman of the platform committee. Some of them were urging a Nolan draft for president."
Related Topics: David Bergland, Roy Childs, Robert A. Heinlein, Libertarian Party, Roger MacBride, Tonie Nathan, Ron Paul, Robert W. Poole, Jr., Justin Raimondo, Earl Ravenal, Mary Ruwart
Two-dimensional libertarianism, by Anthony Gregory, Rational Review, 30 Sep 2004
Questions the usefulness of the two-dimensional Nolan Chart and the World's Smallest Political Quiz and advocates instead a one-dimensional liberty vs. power spectrum

"The two-dimensional Nolan chart appears to be, at first glance, an enormous improvement over all of this one-dimensional nonsense. ... Incidentally, I think David Nolan, founder of the Libertarian Party and inventor of the "Nolan Chart" two-axis grid, on which the "World's Smallest Political Quiz" is based, is a sincere guy who has done quite a lot of good. But I disagree with the idea of using this graph in the ways it often is used. ... I asked David Nolan about this, and he said that libertarians disagree with each other about the essentials of foreign policy."
Related Topics: Right to Keep and Bear Arms, Economic Freedom, Libertarianism, War

Karl Hess: An appreciation, Libertarian Party News, Jun 1994
Memorial essay, discussing when and how Nolan met Hess and other recollections

"I first met Karl Hess in 1979, 12 years after I read his book, 'In A Cause That Will Triumph: The Goldwater Campaign and the Future of Conservatism'. At the time that book was written, both Karl and I still called ourselves Conservatives; by the time we met face-to-face, we had changed our label, but not our beliefs. ... Karl and I were not close friends, although we exchanged notes and occasional phone calls over the years. Nonetheless, I felt a real sadness on learning of his passing, for he was always a joy to be with. Rest in peace, Karl."
Related Topics: Barry Goldwater, Karl Hess
Libertarian Zappa dies, Libertarian Party News, Jan 1994
Memorial essay, mentioning Zappa's libertarian attributes and Nolan's limited contact with him

"Frank Zappa, an innovative and controversial musician whose career spanned nearly three decades, died at his home in Los Angeles on Saturday, Dec. 4, 1993. His death, caused by prostate cancer, came less than three weeks before he would have marked his 53rd birthday. ... It sounds like a cliche, but Frank Zappa truly was 'one of a kind'—a wild individualist who embodied the rebellious spirit of the late '60s and early '70s. ... But there is no question that he was a highly creative individual who valued that creativity and stood tall in the fight against the Leviathan State."
The Barr Campaign At Three Months, 26 Aug 2008
Follow-up discussion of the Bob Barr presidential campaign three months after the nomination (and 10 weeks before the election)

"Since I wrote my column entitled 'The Barr Campaign at Halftime' on August 14, I have received a number of e-mails and phone calls from people offering comments and additional information on what is happening with that campaign. ... Bob Barr needs to get his campaign under control, do some serious fundraising, and start taking bolder stands on the issues: get out of Iraq, end the 'War on Drugs' completely, dismantle the Federal Reserve, pull out of the UN, abolish the IRS, etc. Tepid calls for reduced spending and commissions to study government waste will not inspire activists and donors."
Related Topic: Libertarian Party
The Case For a Libertarian Political Party, The Individualist, Aug 1971
A few months before founding the Libertarian Party, Nolan presents his rationale for establishing a new political party, after discussing four other libertarian activist strategies and admitting that "political approaches are inherently coercive"

"Four years ago, at the YAF convention in Pittsburgh, there was born a unique coalition - the coalition that is known today as 'the libertarian movement'. There, for the first time, Randists, Miseists, and elements of the old 'radical right' from all over the country got together and established an embryonic network ... A sixth point in favor of establishing a libertarian party is that by its mere existence, it would put some pressure on the other parties to take a more libertarian stand. And finally, there is always the possibility that we might actually get some libertarians elected."
Related Topics: Limited Government, Libertarian Party, Liberty International, Politics, Voting
The essence of liberty: What is it that really makes one a libertarian?, Libertarian Party News, Mar 1995
Discusses five points of "no compromise" that Nolan considered essential to libertarianism

"As a founder of the Libertarian Party and editor-in-chief of California Liberty, I am often asked how to tell if someone is 'really' a libertarian. This question has arisen more often than usual in the past few months, as more and more politicians are starting to use libertarian-sounding rhetoric-and it's a point worth raising. ... A government which cannot conscript, confiscate, or counterfeit, and which imposes no criminal penalties for the mere possession and peaceful use of anything, is one that almost all libertarians would be comfortable with."
Related Topics: Right to Keep and Bear Arms, War on Drugs, Libertarianism, Money, Self-ownership, Taxation

David Nolan: What Happened to the Libertarian Party?, The Lew Rockwell Show, 17 Dec 2008
Rockwell asks Nolan about the recent LP presidential campaign and the status of the party
Related Topic: Libertarian Party

Interview with David Nolan, Libertarian Party Founder, by David Nolan (interviewee), Jason Talley, The Motorhome Diaries, 1 May 2009
Jason asks Nolan about the founding and the current direction of the Libertarian Party, the Nolan chart and his current projects

The introductory paragraph uses material from the Wikipedia article "David Nolan (libertarian)" as of 3 Apr 2018, which is released under the Creative Commons Attribution-Share-Alike License 3.0.