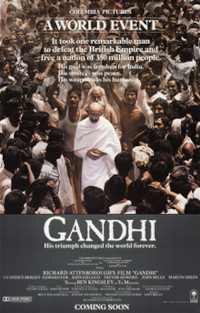 Gandhi is a 1982 epic historical drama film based on the life of Mohandas Karamchand Gandhi, the leader of India's non-violent, non-cooperative independence movement against the United Kingdom's rule of the country during the 20th century. The film, a British-Indian co-production, was written by John Briley and produced and directed by Richard Attenborough. It stars Ben Kingsley in the title role.

Gandhi to British Brigadier and Lord Chelmsford
Responding to Brigadier's "You don't think we're just going to walk out of India!"

Yes. In the end, you will walk out, because 100,000 Englishmen simply cannot control 350,000,000 Indians if those Indians refuse to cooperate. And that is what we intend to achieve: peaceful, nonviolent, non-cooperation -- till you, yourselves, see the wisdom of leaving, Your Excellency.
Gandhi to Mirabehn
Said in his cot while fasting (in order to stop violence resulting from a general strike). Repeated at the end of the film.

Whenever I despair, I remember that the way of truth and love has always won. There may be tyrants and murderers, and for a time, they may seem invincible, but in the end, they always fail. Think of it: always.
Gandhi to Walker
Said to Walker at start of Salt Satyagraha in response to "What if they don't react at all?"

Something for your notebook. The function of a civil resister is to provoke response and we will continue to provoke until they respond or they change the law. They are not in control. We are. That is the strength of civil resistance.
Speech to assembled Hindus in South Africa
In response to audience members advocating violence against British officials

I praise such courage. I need such courage because in this cause I, too, am prepared to die. But, my friend, there is no cause for which I am prepared to kill. Whatever they do to us, we will attack no one, kill no one, but we will not give our fingerprints -- not one of us. They will imprison us, and they will fine us. They will seize our possessions, but they cannot take away our self-respect if we do not give it to them.
Speech to Indian National Congress

Here, we make speeches for each other, and those English liberal magazines that may grant us a few lines. But the people of India are untouched. Their politics are confined to bread and salt. Illiterate they may be, but they're not blind. They see no reason to give their loyalty to rich and powerful men who simply want to take over the role of the British in the name of 'freedom.' This Congress tells the world it represents India. My brothers, India is 700,000 villages, not a few hundred lawyers in Delhi and Bombay.

The introductory paragraph uses material from the Wikipedia article "Gandhi (film)" as of 9 Oct 2018, which is released under the Creative Commons Attribution-Share-Alike License 3.0.