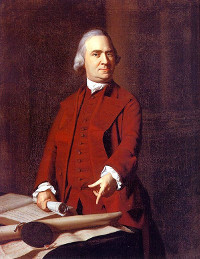 Samuel Adams (27 September [O.S. 16 September] 1722 – 2 October 1803) was an American statesman, political philosopher and one of the Founding Fathers of the United States. He was a politician in colonial Massachusetts, a leader of the movement that became the American Revolution, and one of the architects of the principles of American republicanism that shaped the political culture of the United States. He was a second cousin to fellow Founding Father, President John Adams.

The Post Office as a Violation of Constitutional Rights, by Wendy McElroy, The Freeman, May 2001
Prompted by the announcement of the U.S. Postal Service eBillPay service (now discontinued), surveys the history of mail service vis-à-vis civil rights, from colonial days to the present

... Spooner's claim that a postal monopoly constitutes a standing threat to freedom ... did not originate with [him]. In colonial America the founding fathers were acutely aware of the censorious role that British control of the post office played. Sam Adams urged the creation of a parallel and private system so that information could flow freely from colony to colony and so establish political cohesion. He insisted that the colonial post office deceived the people into believing it was a public utility when its real purpose was to stop 'the Channels of publick Intelligence and' aid 'the measures of Tyranny.'
Related Topics: United States Constitution, Andrew Jackson, Marriage, Monopoly, Freedom of the Press, Moral Repression, Right Against Unreasonable Searches and Seizures, Freedom of Speech, Lysander Spooner, Benjamin Tucker, George Washington
The Rocky Road of American Taxation, by Charles Adams, Mises Daily, 15 Apr 2006
Adapted from the author's For Good and Evil: The Impact of Taxes on the Course of Civilization; examines tax resistance in colonial America up to the Jefferson presidency

But there were opponents, especially the fire-eaters from Massachusetts represented by Sam Adams, who led the revolt against British customs in the War for Independence. He argued that if the Congress had the power to levy a tax on imports, every seaport, from Maine to Georgia, would be filled with an army of overpaid excisemen, tide-waiters, and cellar rats. And what would happen to the funds raised from the sweat of the people? Would Congress guard it with utmost vigilance? Would they dole it out with a frugal hand? No. They would squander it with a reckless profusion, he said.
Related Topics: American Revolutionary War, Canada, Thirteen Colonies, Benjamin Franklin, Thomas Jefferson, Private Property, Right Against Unreasonable Searches and Seizures, Taxation, Voting, War
Samuel Adams - Hero of the Day, The Daily Objectivist, 2000

Nobody could beat Samuel Adams (1722-1803) when it came to radical political activism. If you wanted to set up an organization, stage a protest or overthrow a government, he was your man. ... When Great Britain stepped up its efforts to extract more cash from the colonies in the 1760s, Adams flew into action, helping set up the Boston chapters of the Committees of Correspondence and Sons of Liberty, publishing his own Declaration of Colonial Rights, and arguing as forcefully as possible that his compatriots should throw off the colonial shackles. He was a constant presence in the pre-revolutionary struggle against British rule.
To Defeat the Assault on Liberty, Our Appeals Must Be Moral, by Jim Powell, 13 May 2013
Argues, by providing several historical examples, that "compelling moral appeals for liberty" are needed to confront various current problems such as government spending and debt, higher taxes and disregard of constitutional limits on executive power

... nobody did more than the Boston brewer Samuel Adams to incite resistance. He organized opposition to British taxes. He recruited revolutionaries by visiting shops, taverns, lodges, shipyards and volunteer fire companies. He fumed against British officials with their 'ambition and lust of power above the law.' He warned that political power was 'intoxicating in its nature, too intoxicating and liable to abuse.' The British governor of Massachusetts Francis Bernard denounced Adams, saying 'Every tip of his pen stung like a horned snake.'
Related Topics: Richard Cobden, United States Declaration of Independence, William Lloyd Garrison, Republic of Ireland, Liberty, Ronald Reagan

Among the natural rights of the Colonists are these: First, a right to life; Secondly, to liberty; Thirdly, to property; together with the right to support and defend them in the best manner they can. These are evident branches of, rather than deductions from, the duty of self-preservation, commonly called the first law of nature. ... Now what liberty can there be where property is taken away without consent? ... The Colonists have been branded with the odious names of traitors and rebels only for complaining of their grievances. How long such treatment will or ought to be borne, is submitted.
Related Topics: John Locke, Magna Carta, Freedom of Religion, Rights

The introductory paragraph uses material from the Wikipedia article "Samuel Adams" as of 16 Jun 2018, which is released under the Creative Commons Attribution-Share-Alike License 3.0.