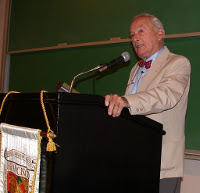 Manuel Ayau (1925-2010) was the founder and former rector and teacher of economics at Universidad Francisco Marroquin. Begun as an alternative to the prevailing statist views of higher education in Guatemala, Francisco Marroquin is now regarded as that country's finest university. In addition to being a successful businessman, Ayau is a former Chairman of the Guatemala Stock Exchange, was a member of the Guatemala House of Representatives, and served as President of the Mont Pelerin Society. He also served for many years on the Board of Liberty Fund.

The Early History of FEE, by Henry Hazlitt, The Freeman, Mar 1984
Excerpted from Hazlitt's remarks at the Leonard E. Read Memorial Conference on Freedom, November 1983; reprinted in the May 2006 issue, including photos of early FEE senior staff

I believe that it is now recognized that to date, Latin America has not given Capitalism a chance. South and Central America have suffered and lived under what Adam Smith condemned as the mercantile system, better known later as mercantilism, inherited from Spain and Portugal since colonial days, with the few exceptional decades in the end of last century and beginning of the present. ... Latin America is going the right way. It promises more freedom and prosperity than in the past. And this prosperity will also be good for the U.S. and the world, because in a freer world, we are all better off when our neighbors are better off.
Related Topics: Latin America, Chile, United States Constitution, Taxation
Give Freedom Its Turn in Latin America, Imprimis, Nov 1984
Paper given at Hillsdale College; argues that problems in Latin American countries are systemic and are due to a "lack of understanding of the economic principles and ethics of a free society"

Latin America is well known for its endemic political instability, coups d’etat, widespread underdevelopment, monetary instability, disproportionate foreign debts, corruption, violence, and recently, the implausible scenario of oil-rich countries going broke. ... The tasks appear to be insurmountable. Yet, if (1) the bailing-out agencies refrain from preventing corrective measures, and (2) we expand the efforts to disseminate the economic and ethical principles of the free society, perhaps the Latin American countries will be ready to try freedom before they reach a total collapse.
Related Topics: Latin America, Argentina, Business, Economics, Guatemala, Taxation
The Impoverishing Effects of Foreign Aid [PDF], Cato Journal, 1984
Analyzes the 1980s debt crisis, from the viewpoint of creditor and debtor countries, suggesting some solutions such as removing trade barriers, ending debtor government interventionist policies and creditor government foreign aid and subsidized bail-outs

The way the current debt crisis of some countries is frequently being analyzed is reminiscent of prior occasions when the solution was considered to be subsidized bail-outs of debtor nations by the governments of lending nations or by international financial agencies. These attempted solutions, however, have in most cases aggravated the problem. ... Let me make a forecast—and a wish that will not be fulfilled. The forecast is that capital will continue to seek its highest value of use ... If this recently developed IMF role ... is reduced or eliminated, what will take its place (on the assumption that my forecast is correct)?
Related Topics: Brazil, Capitalism, Economics, Henry Hazlitt, The State

The introductory paragraph uses material from the Wikipedia article "Manuel Ayau" as of 30 Jan 2018, which is released under the Creative Commons Attribution-Share-Alike License 3.0.