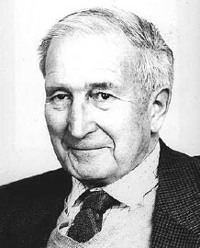 Antony Garrard Newton Flew (11 February 1923 – 8 April 2010) was an English philosopher. Belonging to the analytic and evidentialist schools of thought, Flew was most notable for his work related to the philosophy of religion. During the course of his career he taught at the universities of Oxford, Aberdeen, Keele, Reading and at York University in Toronto.

The 2001 Schlarbaum Laureate is Antony G. N. Flew, emeritus professor of philosophy at the University of Reading, England ... He has been a leading light in British philosophy for the past half-century ... In political philosophy, Flew vigorously defends classical liberalism against the fallacies of egalitarianism. He finds the influential A Theory of Justice, by the Harvard philosopher John Rawls, entirely lacking in the clarity he believed an essential philosophical virtue ... In Thinking Straight (1977) he argues that the ideological conclusions of the left were more central to them than scientific integrity itself.

Antony Flew's 'Social Democracy and the Myth of Social Justice' needs to be in the arsenal of anyone who wants to combat the constant cry of the statists that various coercive measures must be implemented in order to advance social justice. Hayek attacked the notion of social justice in the second volume of Law, Legislation and Liberty, but Flew improves upon Hayek's criticism, taking pains to argue that social justice as customarily conceived is precisely not a kind of justice. He leaves in tatters the theories of Rawls and other ... advocates of the idea that state-sanctioned coercion can make for a more just world.
Related Topics: Rule of Law, Personal Responsibility

The Global Education Industry: Lessons from Private Education in Developing Countries, The Freeman, Sep 2000
Reviews the tittle 1999 book by James Tooley, which includes surveys of "private education alternatives in 13 developing countries" as well as analysis and recommendations

After all the privatizations of the Thatcher years, the British-maintained school system is one of the two largest industries that still remain under state ownership and control. (The other is the National Health Service.) Both are effectively monopolistic and therefore liable to all the notorious faults of monopolies, particularly those run by the government. ... In helping to undermine the intellectual support for government education and, in the current book, demonstrating that private enterprise is providing superior education alternatives for people around the globe, James Tooley has done truly valuable work.
Related Topics: Brazil, Educational Freedom, India, United Kingdom
Milton, John (1608-1674), The Encyclopedia of Libertarianism, 15 Aug 2008
Biographical essay

John Milton was one of the iconic figures of English literature. He is most familiar for his epic poem Paradise Lost and, in particular, his depiction of Satan. However, his legacy extends far beyond that one monumental work and indeed beyond poetry: He was a forceful and courageous writer on matters political and theological. ... In his final years, Milton produced a history of England ... His last great poetic work was Samson Agonistes: a tragic setting of the tale of the Israelite judge whose individual salvation was assured at the moment of his death as his nation lay in ruins about him.
Related Topics: John Milton, Freedom of the Press, Freedom of Religion

The introductory paragraph uses material from the Wikipedia article "Antony Flew" as of 21 Jun 2018, which is released under the Creative Commons Attribution-Share-Alike License 3.0.