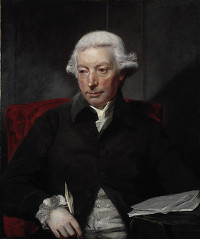 Adam Ferguson, FRSE, also known as Ferguson of Raith (1 July [20 June Julian] 1723 – 22 February 1816), was a Scottish philosopher and historian of the Scottish Enlightenment.

Adam Ferguson was among the most original and important thinkers of the Scottish Enlightenment. He, together with Adam Smith and David Hume, contributed to shaping the philosophical underpinnings of British liberalism ... It was during his tenure as professor of moral philosophy that three of his four most important works were published: the Essay on the History of Civil Society in 1767; the Institutes of Moral Philosophy, a synopsis of his lectures on moral philosophy, in 1769; and the History of the Progress and Termination of the Roman Republic in 1783.
Related Topics: Property, Society

The Spirit of Humility [PDF], by Stanley Kober, Cato Journal, 1997
Discusses the recognition of the limits on human knowledge, which the author claims leads to the title spirit as evidenced in "the American experiment" and its possible lessons for European unification

As David A.J. Richards ... has noted, Adam Ferguson, in An Essay on the History of Civil Society (1767), 'observed that "to the ancient Greek, or the Roman, the individual was nothing, and the public everything," an attitude expressed by disdain for commerce and by devotion to classical republican civic virtue and to war as the main, business of public life; in contrast to such "rude" societies, "civilized" or "polished" societies were marked by commerce and the division of labor and the inequalities that arose from differential rewards for different talents and occupations.'
Related Topics: John Adams, United States Declaration of Independence, Benjamin Franklin, Limited Government, Lebanon, Karl Popper, Freedom of Speech, Taxation, George Washington

The introductory paragraph uses material from the Wikipedia article "Adam Ferguson" as of 3 Jul 2018, which is released under the Creative Commons Attribution-Share-Alike License 3.0.