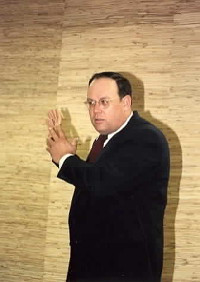 Marshall Fritz (10 March 1943 – 4 November 2008) was an American libertarian activist. A native of Inglewood, California, Fritz was chairman, founder and former president of the Alliance for the Separation of School and State. Prior to founding that organization, he founded the Advocates for Self-Government, a non-profit, non-partisan libertarian advocacy and education center.

Advocates for Self-Government, Founder, Board Member Emeritus
Alliance for the Separation of School and State, Founder, President

Marshall Fritz biography
At the Alliance for the Separation of School & State; includes photograph, short profile and links to various remembrances and tributes

In 1994 Marshall founded the Alliance for the Separation of School & State and was Chairman of the Board until his death. He was a leading spokesman in how ending state, federal, and local government involvement in schooling can improve education for all children, strengthen the family, and even lead to a turnaround of our collapsing society. ... His ideas for high quality education were so advanced that his school [Pioneer Christian Academy] received endorsements of educators from William Glasser to Nobel Laureate Milton Friedman to New York State Teacher of the Year John Taylor Gatto.
Marshall Fritz - The Advocates for Self- Government
Includes picture and biographical profile, discussing in particular Fritz's creation: the World's Smallest Political Quiz

Marshall Fritz was a legendary and beloved libertarian leader who founded the Advocates for Self-Government and created the world-famous World's Smallest Political Quiz. He was an innovator and a genius. He was a brilliant speaker and was extremely personable. He opened many people's eyes to new ideas and new ways of thinking. He was one of those rare people who literally changed the world. ... He was the lead author of the 'Proclamation for the Separation of School and State,' which states simply 'I proclaim publicly that I favor ending government involvement in education.'

The Political Compass & Why Libertarianism is Not Right-Wing, by Jan Clifford Lester, 1994
Presents a Political Compass in contrast to the traditional left/right spectrum, with a north-south axis of Choice vs. (state) Control and a west-east axis of Personal and Property Choice, and a 20 question quiz to determine one's political bearing

This diagram [derived from David Nolan's] makes things clearer, but it fails to incorporate the left/right view as simply left and right ... But what if we follow Marshall Fritz (Bergland 1990, pp. 22-23) and rotate the diagram 45 degrees anti-clockwise? ... With this distinction, libertarians can position themselves on a Political Compass. ["Political map" is the expression Marshal Fritz uses.] ... Marshall Fritz offers a quiz with only five very general questions for each axis.
Related Topics: Libertarianism, David Nolan
School & State Should Be Separated, by F. R. Duplantier, 8 Sep 1996
Reviews Fritz's article "Restoring Parental Responsibility for Education", The Freeman, July 1996; with extensive quotes

'In America, we don't use the government to run the churches; and, considering our diversity, we have admirable religious harmony,' observes Marshall Fritz in the July issue of The Freeman. Fritz believes that 'this "hands-off" policy is America's greatest gift to the human race.' He recommends that the policy be extended to the field of education, as well, calling for 'the separation of school and state.' A former Christian school principal, Fritz is the founder of the Separation of School and State Alliance, which advocates the dismantling of the public school system in America.

Hope for the Politically Homeless, The Fresno Bee, 4 Sep 1988
Introduces David Nolan's Chart which Fritz turned into a Diamond Chart, and Fritz's (original) World's Smallest Political Quiz to help people place themselves within the Chart

David Nolan felt politically homeless. His friend Jill had a nice home on the political left, where she favored free speech and other personal freedoms. And his friend Harry had a comfortable home on the right-wing, where he strongly favored free enterprise. But David agreed with both ... A high score shows that you value responsibility and believe that free-market competition is better for people than central planning by government. You tolerate variation in economic success, as long as people who acquire wealth do so by honest production and trade, not by theft, cheating or political pull.
Related Topics: Libertarianism, David Nolan, Politics
Restoring Parental Responsibility for Education, The Freeman, Jul 1996
Diffferentiates between "public" and "private" schools, arguing against calls for adding "market dynamics" to the former and pointing out lack of parental responsibility as the culprit for the lack of success in tax-funded schools

I would like all children to enjoy the benefits of schools chosen by their parents. If we learn a lesson from our own history it could be possible in very short time. In America we don't use the government to run the churches, and considering our diversity, we have admirable religious harmony. ... Similarly, government must be prevented from compelling school funding, attendance, and curriculum. Only with the separation of school and state can we re-establish parental responsibility, protect parents' rights, and enable schools, teachers, and students to flourish in an environment of educational freedom.
Related Topics: Baseball, Compulsory Education, Learning, Personal Responsibility, Taxation
What Would Schools Be Like?, Issues & Views, 2001
Discusses how schools would be different if they were no longer controlled by the government, and after talking to a Columbine survivor, points out the purpose of government schooling

After liberating schools from the government, what will they be like? Schools will reflect the variety in American society, just like restaurants and groceries do today. ... Today, government schools ridicule parents who smoke, resist recycling, spank, own guns, are anti-U.N., or teach chastity and traditional family values. After seven years of leading the Alliance, having addressed thousands of people in hundreds of cities, I'm now even more convinced that our only hope to strengthen the family, restore respect for morality, and end the escalating violence of public schools, is to separate school from state.
Related Topics: Children, Compulsory Education

The Alliance Story: An Interview With Marshall Fritz, by Marshall Fritz, Tammy Drennan
Topics include how Fritz came to his views, why he thinks government schools cannot be reformed, charter schools, various objections to turning education to the free market and the effects of state/school separation on taxes, the economy and "the church"

A number of years ago I started a school called Pioneer Christian Academy. I started Pioneer to initiate a paradigm shift in K-12 education, a breakthrough I knew was impossible for government schools because they are rooted in socialism, and it's almost impossible for educators, for other reasons, to attempt a breakthrough ... We look with disgust at Andersonville, Auschwitz and the gulag: if we do not reverse this culture, we are looking at our future. State schools are the reproductive organs of statism. The separation of school and state is part of the reversal of the idolatry of government.
Related Topics: Compulsory Education, Ethics, Personal Responsibility, Alliance for the Separation of School and State, Taxation
The Separation of School and State Alliance: An Interview with Marshall Fritz, 3 Jun 1999
Transcript of online chat hosted by Mary Leggewie (creator of HomeschoolChristian.com) and including audience member questions, many asking about ways to support Fritz and the Alliance's efforts

Marshall Fritz is director of the Separation of School and State Alliance, a national organization he founded in 1994. By mid-1999, over 7,000 educators, parents, scholars, and clergy have joined the call to reunite schools and families by dissolving the bonds between schools and government. Marshall claims "If we are going to integrate God and education, we must separate school and state." ... Marshall was born in California in 1943 and earned a B.A. from California State University Fullerton in 1964. He lives in Fresno with wife of 35 years, Joan. They have four grown children and five grandchildren.
Related Topics: Compulsory Education, Homeschooling, Libertarianism, Ron Paul, Alliance for the Separation of School and State, Socialism

Marshall Fritz on the Separation of School and State, 1996
Recording of talk given at the 1996 International Society of Individual Liberty conference held in Canada; Fritz explains why government, tax-funded education is detrimental to liberty and what parents can do about it
Related Topic: Educational Freedom

The introductory paragraph uses material from the Wikipedia article "Marshall Fritz" as of 19 Apr 2018, which is released under the Creative Commons Attribution-Share-Alike License 3.0.