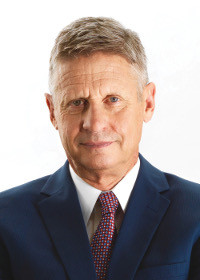 Gary Earl Johnson (born 1 January 1953) is an American businessman, author and politician. He was the 29th Governor of New Mexico from 1995 to 2003 as a member of the Republican Party. He was also the Libertarian Party nominee for President of the United States in the 2012 and 2016 elections.

Students for Liberty, Board of Advisors

Today, Gary Johnson - two-term governor of New Mexico - is formally endorsing Ron Paul for President. To announce his endorsement, Governor Johnson issued the following statement: "I am endorsing Ron Paul for the Republican nomination for President because of his commitment to less government, greater liberty, and lasting prosperity for America. ..." Gary Johnson was governor of New Mexico from 1995 to 2003. As governor, he was a forceful advocate for limited government, gaining the nickname "Veto Johnson" for his record of vetoing hundreds of bills.
Related Topic: Ron Paul

New Mexico Gov. Gary Johnson is many things—a successful businessman, a two-term governor, an Iron Man triathlete, an aspiring conqueror of Mt. Everest. He's hardly a liberal, though, unless one uses the term in its original sense of someone who believes that a minimal state is best suited for a free people. ... When pressed on his vision of the state's role, the 47-year-old Johnson speaks of "ensuring a level playing field and [making certain] that liberties and freedoms are equally available to all." He argues that the government only "needs to ensure that no one is harmful to anyone else."
Related Topics: War on Drugs, Educational Freedom, New Mexico, Prohibition, Taxation
Interview with Governor Gary Johnson, Drug War Chronicle, 13 Oct 2000
Discusses Johnson's stand on legalizing heroin and marijuana (and why he chose not to delve on the former), the impact he had in New Mexico by raising the issues and what he planned to do after he left office (climb Mt. Everest)

New Mexico Republican Governor Gary Johnson, 47, entered the national spotlight little more than a year ago when he stepped forward to dissent from the bipartisan consensus favoring the war on drugs. In doing so, he has become the highest elected official in the land to call for the outright legalization of marijuana and dramatic harm reduction measures to address hard drug abuse ... Undeterred by the attacks or by a drop in his popularity at home, Johnson has continued as an effective advocate for reform. He has attended dozens of meetings throughout New Mexico to explain his views, and has been active nationally as well.
Related Topics: War on Drugs, New Mexico

The introductory paragraph uses material from the Wikipedia article "Gary Johnson" as of 6 Jun 2018, which is released under the Creative Commons Attribution-Share-Alike License 3.0.